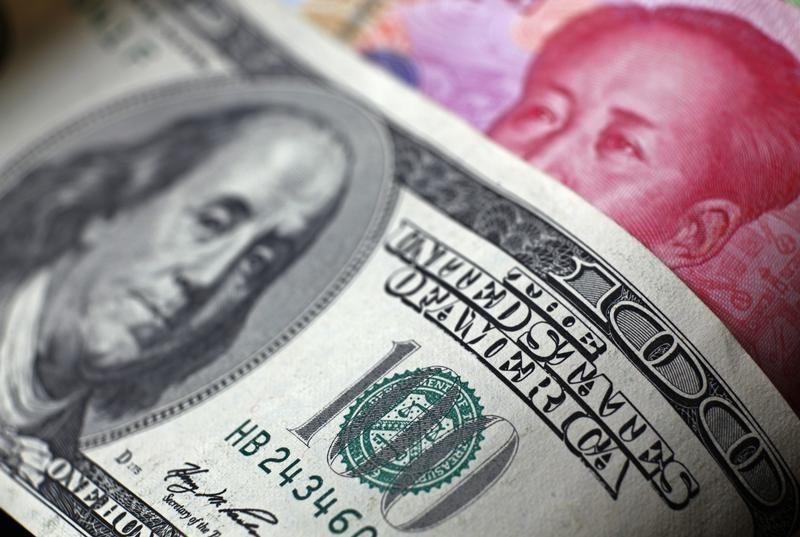 (Bloomberg) — The yuan is hurting after months of standing tall against the dollar.

In March, the currency gave up all its 2021 gains and then some. There are signs a short-term retreat may be starting as the drivers that lifted the yuan last year — a quicker economic rebound from the pandemic and investors seeking yields — get eroded, dimming the currency’s appeal.

Investors flooded into Chinese bond markets in 2020, boosting yuan usage and furthering China’s ambitions to internationalize its currency. But, a spike in Treasury yields is now cutting into the yuan’s yield premium, while an Russell index inclusion will now take place over a much longer period, slowing inflows. Throw in tensions between Beijing and Washington, and all these are speed-bumps for a currency that jumped almost 7% against the dollar last year.

“Last year, 10-year U.S. versus Chinese government bonds were glaringly attractive whereas that’s compressed now,” Thu Ha Chow, a portfolio manager at Loomis Sayles Investments Asia in Singapore, said of yield spreads. “Dollar-yuan can go up a bit, but not to the worrying levels like what we saw” previously, she added.

Foreign investors boosted their holdings of Chinese bonds by more than 1 trillion yuan ($153 billion) last year to a record 3.3 trillion yuan, according to data from the central bank. The funds were driven by a yield spread that touched a record of around 2.5% in November, and a resilience that made China’s debts a haven.

So far, the current bout of weakness doesn’t seem to be worrying the People’s Bank of China. Two weeks ago, it vowed to increase currency flexibility, a sign that Beijing will allow the yuan to drop against the dollar. Another policy maker recently expanded the quota for outgoing investments.

“The PBOC will have tools to deal with any sharp depreciation, and it looks to be comfortable with the yuan correction for now,” said Ken Cheung, chief Asian currency strategist at Mizuho Bank Ltd.

The yuan’s decline in March, its biggest monthly drop in a year, has arrested a steady advance that saw it head toward 6.4 from a low of 7.18 against the dollar last May.

This year, a relentless climb in Treasury yields has narrowed the yield gap of Chinese government bonds by around 1 percentage point from the record high. That advantage looks set to erode further with some on Wall Street forecasting that U.S. yields will climb to 2%.

Adding to the strains is an extension of the inclusion period for Chinese bonds into FTSE Russell’s flagship index to three years rather than the 12 months envisioned.

“The yuan will likely keep weakening in the near-term, as none of the key developments in global markets is good news for the currency.” said Tommy Xie, head of Greater China research at Oversea-Chinese Banking Corp., adding the yuan may drop to 6.6 per dollar soon. “But the depreciation will be temporary, with the currency steadying in the second half, as the dollar rise will lose steam.”

There’s also evidence that Chinese corporates and individuals have become less willing to own the yuan. They cut buying for two months as of February, the first back-to-back reduction in more than two years. At the same time, onshore banks became more active dollar buyers via the swaps market.

To top it off, U.S.-China relations are back in the limelight. The first face-to-face meeting between officials of the Biden administration and their Chinese counterparts failed to reach agreement on the way ahead. Washington recently imposed sanctions over alleged human rights abuses in Xinjiang, spurring a backlash from Beijing.

When the trade war between China and the U.S. escalated in August 2019, the yuan quickly tanked to 7 per dollar, the first time in a decade.

Still, any decline would be temporary, according to Chow at Loomis Sayles. “When the yields become attractive again there’ll be a whole load of people who’d have global mandates needing to allocate to China,” she said. “If there was a big weakness, there’d be an opportunity for people to get back in.”