The biggest enemy of growth stocks is inflation. These days, when considering surging bond yields, it would appear that beast is rearing its head.

Expectations of more economic stimulus from the Biden administration and positive signs on containing COVID-19 are pushing rates higher globally, with the U.S. benchmark 10-year yield trading at a one-year high of 1.39% at time of writing.

The surge in yields largely reflects investor expectations of a strong economic recovery. But when that happens, it could also force central banks to remove their monetary stimulus, making stocks the less favorable investment choice, especially high-growth technology shares.

The largest U.S. technology stocks, as represented by the FAANG group that includes Facebook (NASDAQ:FB), Apple (NASDAQ:AAPL) and Amazon (NASDAQ:AMZN) are more vulnerable to rising bond yields after their explosive growth during the pandemic.

That’s the main reason these stocks are increasingly coming under pressure, as evidence for a strong, second-quarter economic recovery mounts. The Invesco QQQ Trust ETF (NASDAQ:QQQ), which tracks the NASDAQ 100 Index, with its top holdings that include Apple, Microsoft (NASDAQ:MSFT) and Amazon, has underperformed the S&P 500 Index in recent weeks. It fell more than 2% on Monday after remaining flat for a month. 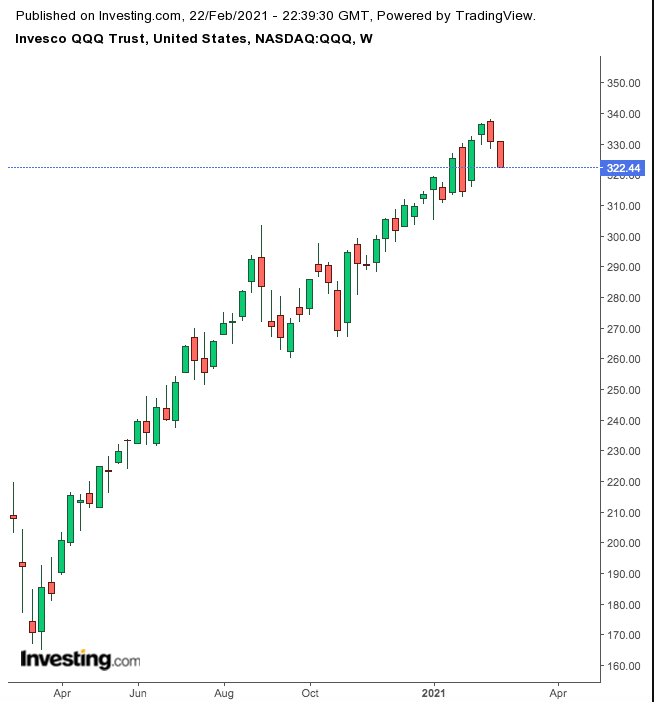 The impact of potential inflation and higher interest rates on stocks depends a lot on how quickly yields can rise. A range of analysts forecast that the 10-year Treasury yield will reach anywhere from 1.5% to 2% by the end of the year, as investors start preparing for future rate increases from the Fed, according to a Wall Street Journal forecast.

The Most Worrisome Outcome

As expectations of inflationary pressures rise, analysts have divergent views on their impact on stock prices. The most worrisome outcome could be a repeat of 2013, when then-Fed Chair Ben Bernanke’s mere suggestion of tapering the central bank's asset purchase program sent bond yields sharply higher and stocks plunging.

“The fear is that these assets are priced to perfection when the ECB and Fed might eventually taper,” said Sebastien Galy, senior macro strategist at Nordea Asset Management, in a research note entitled “Little taper tantrum” and cited by CNBC.com. “The odds of tapering are helped in the United States by better retail sales after four months of disappointment and the expectation of large issuance from the $1.9-trillion fiscal package.”

Despite the prospects of some correction in the high-flying growth stocks, the conditions on the ground remain highly favorable for their businesses. The shift to e-commerce, the increasing use of virtual offices and classrooms, and the surging demand for the technology hardware are some of the trends that are here to stay. With that, there is no sign at this point that the Fed is going to remove the monetary stimulus that’s providing a lifeline to millions of small businesses that have been devastated during the pandemic.

Barclays' head of European Equity Strategy, Emmanuel Cau, says that the steepening yield curve is “typical at the early stages of the cycle.”

As he said in a recent note:

“Of course, after the strong move of the last few weeks, equities could mark a pause as many sectors that have rallied with yields look overbought, like commodities and banks. But at this stage, we think rising yields are more a confirmation of the equity bull market than a threat, so dips should continue to be bought.”

Growth stocks may see additional sell-offs as bond yields continue to show some recovery from their historical lows.

But that shouldn’t be taken as a threat to high-profile tech stocks which, in our view, are still in a bull market. Their fundamental growth story remains intact.

The evidence of this came from the just concluded earnings season in which 95% of tech companies beat profit estimates and 88% of them topped revenue projections.