A pullback in the 10-year Treasury yield seems to be aiding a comeback in equities.

With the benchmark government debt rate back below 1.7%, investors appear to be breathing at least a partial sigh of relief, although the rise in equity index futures was indicating that a potential rebound in stocks wouldn’t be nearly as big as the losses suffered yesterday.

Mixed earnings news from two economic bellwether companies seemed to be mostly a wash as far as the broader market was concerned.

Meanwhile, FedEx (NYSE:FDX) shares were solidly higher this morning after the delivery company beat estimates for its top and bottom lines. Volume growth in its U.S. domestic residential package and international priority services, as well as pricing initiatives, helped the company overcome the challenge of severe weather last month.

During the pandemic, both companies have seen higher demand from e-commerce as people have increasingly shopped at home, but Nike has gotten hit by retail store closures. That’s been a story for many businesses, and hopes that the vaccine rollout will help get people back into stores have been an underpinning of the stock market’s recent rally.

A Setback Across The Atlantic?

While the vaccine rollout has been progressing fairly well in the United States, where case counts have been on the decline and government restrictions have been easing, Europe hasn’t been faring as well, with Paris announcing a month-long lockdown as the nation worries about another wave of infections. Germany is also in the grip of rising case rates.

The resurging coronavirus in Europe has led to concerns that economic recovery predictions might not come to fruition as fast as expected and seems to be contributing to a continued tug-of-war between stocks that would benefit from an economic reopening and those that stand to continue to thrive in a stay-at-home environment.

One thing you may want to note is that it’s quadruple witching today. The day each quarter when contracts for stock index futures, stock index options, stock options and single-stock futures all expire can add to volatility. It often makes for an interesting—if not volatile—session as positions get squared up and rolled ahead. Will there be more, less or about the same level of optimism in the coming quarter as there was last quarter?

Yesterday’s pullback may have been exacerbated by the unwinding of positions ahead of quadruple witching as well as concerns about the coronavirus in Europe.

But the Treasury market took center stage for Wall Street traders and investors on Thursday, as the yield on the 10-year note rose above 1.75 to its highest level since January 2020. The 30-year bond yield also rose, touching its highest point since August 2019.

Interest rates were on the rise after the Fed indicated it’s willing to let inflation run hot for a while. With central bankers still strongly in accommodative policy mode, worries apparently are ratcheting up that a combination of government stimulus and a vaccination-led surge in economic activity could create problematic inflation in the coming months.

Those fears bought the spotlight back on growth stocks amid worries about their future valuations. For many growth stocks, cheap money has helped fuel the rally, so any possible rise in interest rates could dent their ability to fund growth with debt. In a more general sense, inflation can also eat into forward earnings and thus valuations.

That left mega-cap growth names weighing on the market. Because those stocks are so large and widely held, they can exert outsize influence on the market as a whole.

Still, there were signs that things weren’t really all that bad. It’s true that the tech-heavy Nasdaq Composite lost more than 3% because of an exodus from growth stocks. But the S&P 500 Index lost much less, and the loss in the Dow Jones Industrial Average was lesser still. All three indices are pointing higher ahead of the open Friday.

It seems that as investors were exiting some positions in big-growth names, they weren’t selling out of equites all together. The financials sector actually gained ground, which is probably to be expected when longer term interest rates rise. And other sectors that tend to do better along with the economy and that aren’t dominated by mega-caps didn’t fall that much, relatively speaking. For example, the industrials sector only dipped 0.05%.

Energy Falters And A Look Ahead

An exception was the energy sector. Energy had been the sector darling in recent weeks—tracking a big rise in crude oil—amid an expected demand surge for crude as travel, transportation and manufacturing activity picked up. But prices for black gold seem to have hit a snag.

Oil prices have fallen for five straight days now, and Thursday’s drop was a doozy. Although the longer term outlook for oil demand still appears promising, a rising dollar has pressured prices, as has inventory data that showed another rise in U.S. crude inventories. And setbacks in the global vaccine rollout have dented some optimism about oil demand.

In fundamental economic news, U.S. jobless claims didn’t help things Thursday, either for oil or for equities. The figure came in at 770,000 when 710,000 had been expected in a Briefing.com consensus. The new number was an increase from the upwardly revised prior week’s figure of 725,000 and was another reminder that the labor market is still far from fully healed.

With earnings season winding down, a lot of high profile companies have already reported. Still, there are some earnings that could be interesting for investors. Next week’s earnings include those from KB Home (NYSE:KBH), which could shine another light on the housing market. KBH’s earnings follow this week’s report from home builder Lennar (NYSE:LEN), which reported better-than-expected earnings and said it’s enjoying strong gross margin on home sales and expects that to continue. We’ll have to see if KBH’s earnings continue to bear out that positive sign for the housing market. And it could be interesting to see if company management has anything to say about rising interest rates and whether they might put a crimp in a housing market that has benefited from historically low rates.

Speaking of housing, next week also holds economic reports on existing and new home sales. Other economic reports that are likely to be watched next week include durable goods orders, weekly jobless claims numbers, and personal consumption expenditures inflation data. 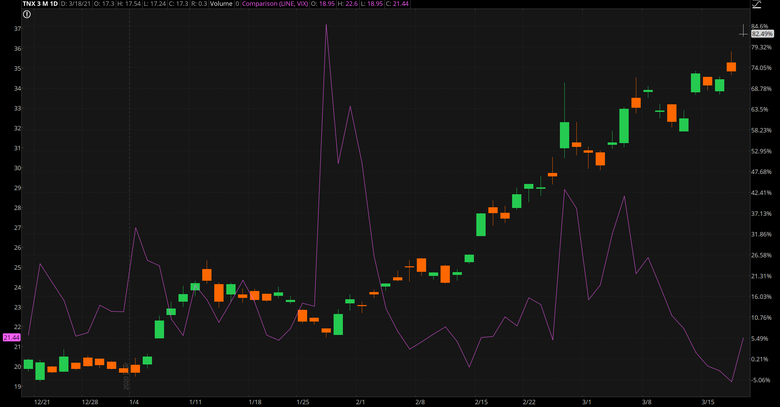 CHART OF THE DAY: MIXED MESSAGE. In recent weeks, we’ve been paying attention to this chart that shows the 10-Year Treasury Note Yield Index (TNX—candlestick) and the Cboe Volatility Index (VIX—purple line). The VIX, Wall Street’s main fear gauge, has tended to spike when there have been large increases in the yield on the 10-year note, like we saw yesterday. But it’s interesting to note the downtrend in the VIX before this most recent spike. Over that time, the yield was generally increasing. The lack of response from the VIX could indicate that while there’s worry in the market about rising rates, there’s also an underpinning of optimism because of the same economic recovery spurred by vaccines and stimulus that’s helping stoke the inflation worries underpinning the rise in yield. Data source: Cboe Global Markets (NYSE:CBOE). Chart source: The thinkorswim® platform. For illustrative purposes only. Past performance does not guarantee future results.

Don’t Throw Out The Core: Core PCE price data is the Fed’s preferred inflation gauge. This data could be of particular note next week given the heightened worries about inflation that have ratcheted up concern in the equities market. A number well below expectations might help calm some nerves, or a large move in the other direction could jangle them. Either way, though, it’s important to remember that the PCE numbers are backward looking, and the market is forward looking. That could mean that regardless of what the core PCE number is, the market could remain fearful of inflation down the road as government stimulus and increasing numbers of vaccinated people raise worries that the economic recovery might also hold problematic inflation if the Fed is too accommodative.

Inflation Not A Done Deal: It’s also important to remember that not everyone thinks the economic recovery will end up creating an excess of inflation. “Disagreements surround the speed and magnitude of future inflation and interest-rate increases,” investment research firm CFRA said in a note Wednesday. “The ongoing concern is whether euphoria will morph into excess.” But for now those are just worries. The market remains near record highs and still seems to have plenty of wind in its sails. “The combination of Covid vaccines, government stimulus, and a still-dovish Fed continues to offer encouragement that equities have room to run,” the CFRA note said.

Save Us A Seat: Want to get out and catch a flick this weekend? Your chances of finding an open theater are improving, which is seen as a good sign for the economic recovery as coronavirus case counts decline and the number of people getting vaccinated increases. AMC Theatres (NYSE:AMC) said this week that beginning today, 98% of its theaters in the United States will be open. By March 26, it expects 99% of it’s U.S. circuit will be open. The company is opening more than 40 locations in California beginning today, including all of its theaters in Los Angeles County and San Diego County. While you’re more likely to get a seat at the silver screen this weekend, it’s still not going to be exactly like things were before the pandemic at AMC movie theaters. You’ll have to wear a mask unless you’re eating and drinking, and when you purchase tickets online or at the theater, surrounding seats will be automatically blocked off to promote social distancing within the auditorium. It seems like a taste of the new normal we could be in store for as the economy keeps reopening.