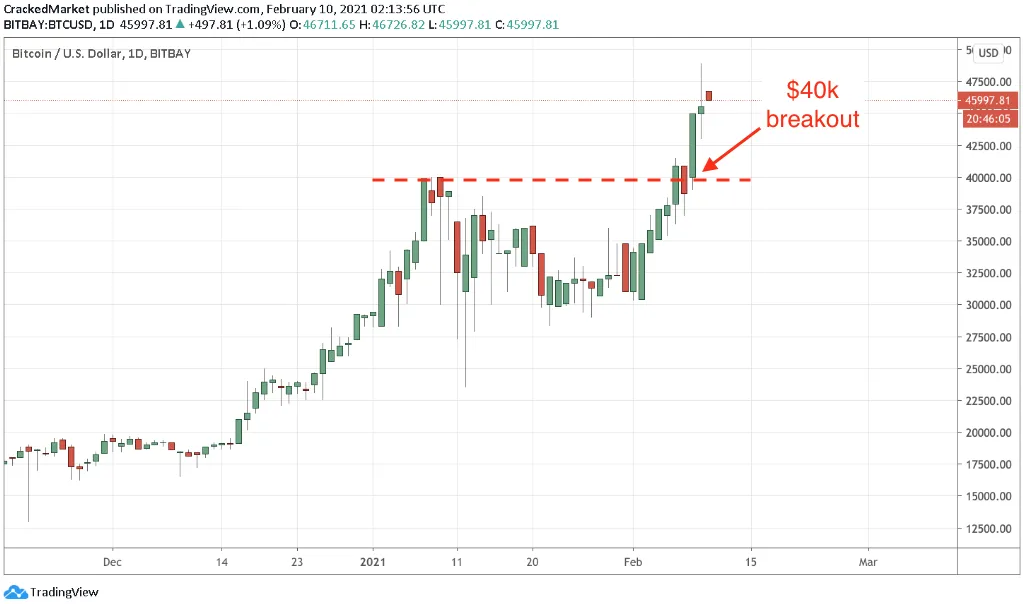 Yesterday, I wrote about Tesla (NASDAQ:TSLA) buying $1.5 billion worth of Bitcoin from TSLA’s perspective. (TL;DR I’m not a fan.) Today, I’m looking at this transaction from Bitcoin’s point of view.

For the millennial, Robinhood vigilante, this marriage between two of their favorite momentum darlings is a match made in heaven. The only way this could get any better is if it turns into a three-way with GameStop (NYSE:GME) getting invited to the party. (Maybe Elon will surprise us with this announcement next week!)

Anyway, Elon Musk putting his money (actually, his shareholders’ money) where his mouth is was a huge boost in Bitcoin’s credibility. This is far and away the largest and most mainstream embrace of Bitcoin by corporate America yet. It’s no surprise the cryptocurrency surged 20% on the news.

As I wrote previously, Bitcoin was consolidating in the $30k’s after last year’s breakout above $10k resistance. I expected this consolidation would last a little longer than a few weeks, but that’s why we trade the price action, not what we think. Bitcoin broke above $40k and that immediately made it buyable.

And as long a Bitcoin remains above $40k it is ownable. Keep holding for higher prices and lifting our trailing stops.

As for what this deal means for Bitcoin long-term, don’t expect many corporations to follow TSLA’s lead. Most CEOs are not as brash as Elon and there is no way they would put their reputation or their job on the line for something as volatile as BTC. All it takes is a very normal dip in BTC prices and TSLA will be forced to report hundreds of millions of dollars in quarterly losses during their next earnings report. (Mark-to-market reporting required by the SEC.) Once that happens, any potential interest in BTC will vanish along with TSLA’s profits.

What this means for Bitcoin is it is still up to individual speculators to keep pushing prices higher. Are there enough people willing to buy Bitcoin above $40k? We will find out soon enough.