Walt Disney & Co. (NYSE:DIS), one of America’s most iconic brands, was a staple stock for many retirement portfolios before the pandemic. The company showed solid growth and had an attractive dividend.

Disney offered a winning combination for long-term investors. Its core business, which included theme parks and movie theaters, generated hefty amounts of cash, which the House of Mouse used for dividend payouts and to invest for growth.

But that model unravelled during the pandemic, forcing the company to close the very attractions on which its brand was built and take a variety of cost-cutting measures, including furloughing thousands of workers and eliminating dividends.

During its most recent quarter, total revenue at Disney dropped 22% to $16.25 billion, with a drastic slide in sales in both the company’s media and entertainment distribution as well as its parks, experiences and products segments. In the latter group, revenue plummeted by more than half.

For long-term investors, the biggest question going forward is whether California-based Disney will ever be able to return to normal once the pandemic is contained.

Judging by the powerful rally in Disney shares—which have gained more than 90% in the past year—it appears investors have priced in a more profitable future for the world’s largest entertainment company after a devastating year. The stock closed Tuesday at $185.53, after hitting a record high earlier this month. 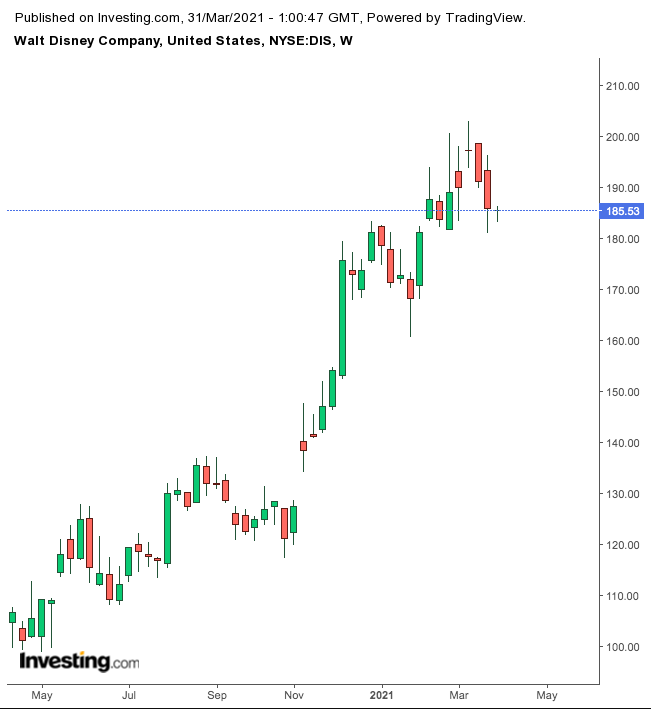 There are some early indications that Disney is slowly returning to normal as vaccine rollouts ramp up in the US. On Mar. 17, Disney announced it plans to reopen Disneyland and Disney California Adventure parks on Apr. 30, after keeping them closed for more than a year.

The company said that more than 10,000 cast members would be returning to work. Its park in Orlando, Florida, Walt Disney World, has been open since last July with some restrictions.

With these reopenings, what’s become more exciting about Disney is that the pandemic has hastened the company’s expansion to digital entertainment, positioning it to become a major player in the rapidly-expanding, video-streaming market.

The Disney+ streaming service, which competes with Netflix (NASDAQ:NFLX) and other newer entrants, marked 100 million subscribers this month, as it aims to reach 260 million by 2024. Analysts at Goldman Sachs, among the biggest bulls on Disney shares, have set a $225 price target on its stock. They believe Disney’s rich pipeline of new original content and other proactive measures should help fuel additional subscriber growth.

With that, strong demand for the parks implies that Disney’s core businesses remain well positioned for rapid recovery as the economy reopens. According to Goldman, the long-term viability of these legacy businesses is intact.

KeyBanc analyst Brandon Nispel said Disney’s streaming efforts are “scaling rapidly and growing faster than expected,” with a “long runway” for growth, while the parks segment shows “strong” efficiency, with a more profitable future ahead once attendance returns.

Disney has certainly lost some of its appeal as a “fortress stock” for retirees during the past year when it was forced to eliminate its dividend. But that shock, in our view, has accelerated the company’s shift to streaming and becoming a more efficient entertainment option.

Disney probably won’t bring back its dividend anytime soon, but there are plenty of other reasons for retirees to keep this stock in their portfolio.