The duly rose on the weaker than expected as the taper theme (start of discussions moving to serious contemplation) was dialed back. The Fed‘s forward guidance manouevers can continue, and inflation trades breathed a sigh of relief. Encouragingly for the S&P 500, reflation trades weren‘t affected as evidenced by value stocks rising again, regardless of the long-dated Treasuries action.

Of course, volatility welcomed the retreat in yields as much as technology did – but the option traders aren‘t buying into the upswing nearly as much. Practically speaking, Friday‘s moves in the , some commodities and precious metals, reversed a great chunk of the preceding day‘s bigger swings. The guessing game on the Fed‘s taper goes on, and the upcoming readings won‘t add to the markets‘ peace, fuelling the sense of taper urgency as the inflation figures won‘t be on the low side. Add in that the job market is slowly catching fire, and you will understand why I have been calling for months for elevated inflation readings.

It‘s the market reaction that matters – what is at stake, is how much the Fed is still expected to fight inflation. As I wrote previously:

(…) Should the transition into a higher inflation environment be appreciated for what it is, the dive in , and wouldn‘t have been that steep. On the other hand, the sharpest moves tend to be the countertrend ones – yes, I‘m still of the opinion that the current reflationary period with reopening rush (more juice left in value over growth trades) is conducive to higher stock market and commodity prices. Including precious metals, naturally.

Moreover, the taper talk (…is…) exposing a key vulnerability in the Treasury market. The Fed is well aware that its ample support is a condition sine qua non, and that rising yields (rising real rates) aren‘t in the largest borrower and real economy‘s interests. Financial repression has to come into the picture, and that‘s one of the reasons why precious metals have been on a tear lately. We‘re also a long way from inflation breaking the back of stock market bulls.

So stocks have taken the risk-on cue, amply reversing Thursday‘s losses – but the same can‘t be said about gold, silver or copper. Precious metals pared Thursday‘s setback, as did miners. Conducive conditions to facilitate additional gains have been in place for some time, but the optimism over Fed moves being dialed back is more guarded. Understandably so when Janet Yellen would welcome higher inflation and higher rates as per her G7 meeting proclamation. The bulls aren‘t out of the woods – all eyes on nominal yields, inflation expectations and the dollar now.

is refusing to budge, and the oil index doesn‘t favor too much downside. Should commodities stall again though, oil would be no exception – in spite of its next upleg getting underway after the long sideways consolidation (with a bullish slant, however).

Cryptos can‘t get their mojo, but aren‘t falling through the floor either. The consolidation goes on, and bulls better step in and overcome Thursday‘s highs for the recovery to continue. That‘s not unimaginable for or , though – it‘s only that is acting really weak relatively speaking.

Let‘s move right into the charts (all courtesy of www.stockcharts.com).

It‘s nice that gold recovered from yet another dive but, its white candle could have closed nearer to the daily highs – it‘s concerning that it didn‘t, and the same applies to miners. The return of strength has been suboptimal when nominal rates solely are assessed. Of course, that ties in to the retreat in inflation expectations, coupled with rising rates expectation underpinning the . 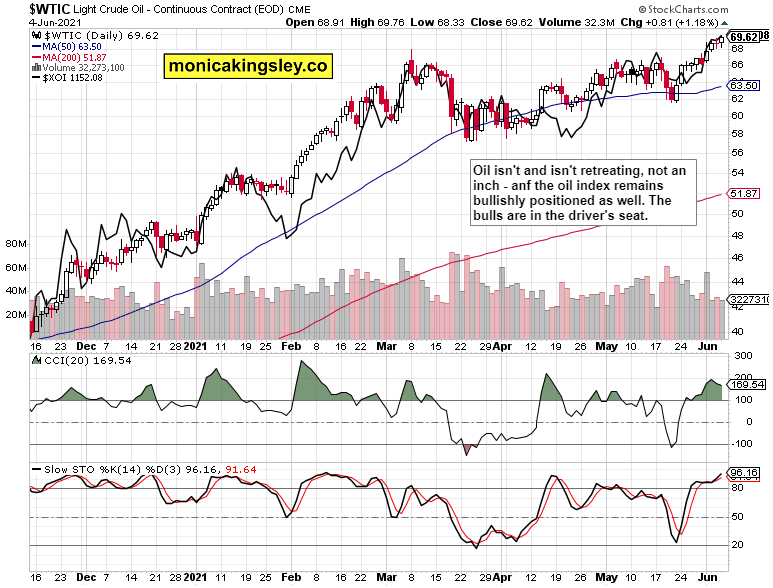 Crude oil is continuing its low volatility rise, volume isn‘t drying up, and the oil index supports the upleg to proceed.

S&P 500 bears got on the defensive again, and credit markets give the bulls benefit of the doubt. How another attempt at all time highs unfolds is to be closely observed for signs of strength/weakness.

Gold and silver remarkably rebounded, but could have recouped even more of Thursday‘s losses. It remains a (short-term) red flag they didn‘t. The bulls haven‘t proved themselves entirely, which can be explained by yields, inflation and dollar.dynamics.

Bitcoin and Ethereum’s meek recovery, bottom searching after Elon Musk‘s broken heart emoji tweet goes on, and the Miami show didn‘t help much. The longer prices stay this low without steadily attempting a march higher, the more vulnerable they are.