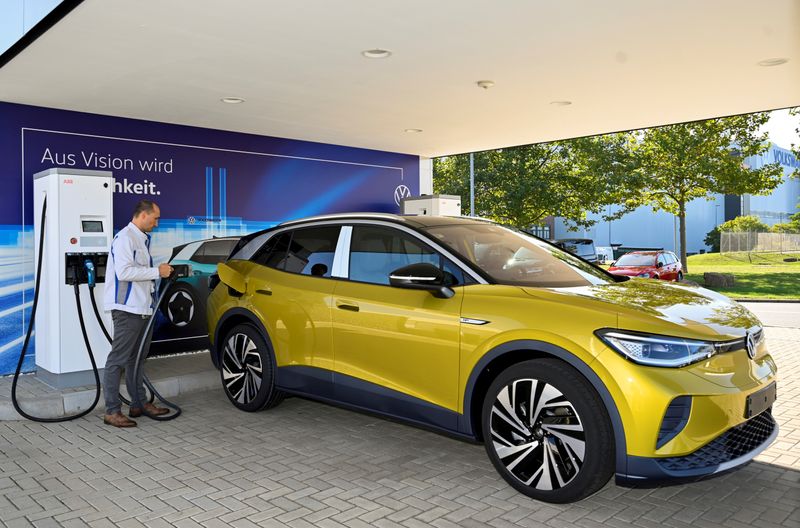 SEOUL (Reuters) – Volkswagen (DE:VOWG_p) plans to gradually switch the type of battery used in its electric vehicles, three sources with knowledge of the matter said on Monday, moving away from the technology supplied under current deals with South Korea's LG Energy Solution and SK Innovation.

South Korea's LG Energy Solution and SK Innovation have been manufacturing pouch-type batteries for Volkswagen, while CATL and Samsung (KS:005930) SDI have supplied it with prismatic ones.

LG Energy Solution, a unit of LG Chem, said it does not comment on market speculation, while SK Innovation declined to comment.

"It really depends on how fast Volkswagen manages to switch to prismatic type batteries. Currently, there are not enough prismatic battery supplies, and it would take quite a while for Volkswagen to fully adopt them," sand Han Sang-won, an analyst at Daishin Securities.

"One of the reasons that Volkswagen has chosen to switch could be to enhance electric vehicles' safety, as prismatic batteries are generally considered to have lower energy density than pouch-type batteries, making them relatively safer," Han added.

Among three types of batteries – prismatic, pouch and cylindrical – prismatic batteries had 49% share in the EV battery market in 2020, while pouch-type batteries had 28%, according to industry tracker SNE Research.

The plan comes at a time that LG Energy Solution and SK Innovation are locked in a legal battle in the United States over allegations of misappropriation of trade secrets related to EV battery technology.