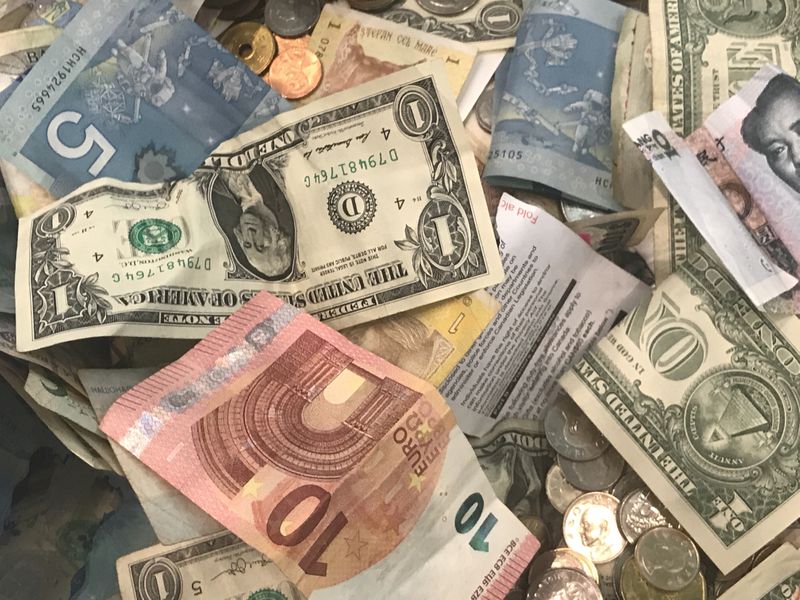 © Reuters. FILE PHOTO: U.S. dollars and other world currencies lie in a charity receptacle at Pearson international airport in Toronto 2/2

TOKYO (Reuters) – The dollar held gains against major peers in holiday-thinned trading on Wednesday as caution about a fast-spreading coronavirus variant in the UK stoked demand for the safest assets.

The pound has fallen for three straight days as time runs out for London to reach a trade deal with Brussels before the UK completes its exit from the European Union at year-end.

"People have some concerns about COVID and about Brexit, but it's not at the point where the positive sentiment has turned," said Shinichiro Kadota, senior currency strategist at Barclays (LON:BARC) Capital in Tokyo.

"Given how much the dollar has weakened, it's feasible to see a retracement higher as people go for the holidays, but in the very near term we expect the dollar to remain weak."

The market has been positioned for a pandemic recovery that lifts global growth, sapping demand for the dollar and other haven currencies.

That development has since been clouded by President Donald Trump's threat not to approve the stimulus bill, saying it should be amended to increase the amount in the stimulus checks, though this has had little impact on markets so far.

"I don’t know how much of this is posturing by Trump or if he’s really demanding these changes," said Barclays' Kadota.

"The muted reaction so far suggest the foreign-exchange market expects the bill to pass in some form."

At the same time, the new coronavirus variant has introduced new risks to that rosy scenario, even as medical experts have sought to allay people's fears.

The dollar was little changed at 103.63 yen, another traditional haven.

With only days left before the UK leaves the EU's trade orbit, the pound has vacillated as it awaits signs of progress in negotiations.

A deal is possible Wednesday, an ITV (LON:ITV) reporter tweeted.

Earlier, the EU's chief negotiator said the bloc is making a "final push" for a trade deal, although there are still deep rifts over fishing rights.

"The market is just waiting for the final result of Brexit talks, and in the meantime being swung by conflicting headlines," Barclays' Kadota said.