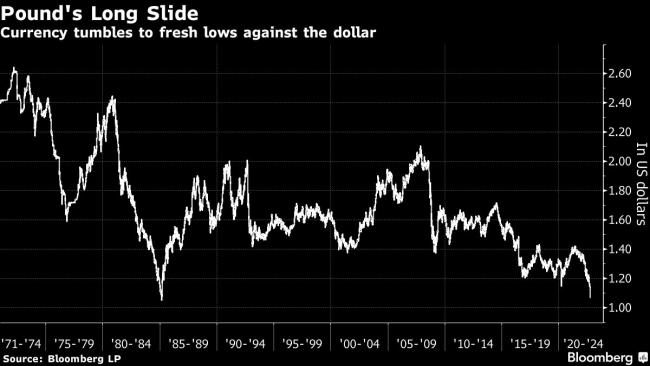 (Bloomberg) — Speculators are betting the UK’s pound will slide to a level that was virtually unthinkable in recent decades: $1 or less.

After the pound tumbled as low as $1.035 Monday, the weakest on record, options markets show traders expect it to keep falling. Three-month risk-reversal contracts lean the most bearish against the pound since 2016, while others show a nearly 60% chance it will hit $1 before the end of this year.

At the same time, analysts at banks including Morgan Stanley (NYSE:) and Nomura International said they expect it to touch or cross that threshold.

“I think it’s going to get worse, unfortunately,” Jordan Rochester, a London-based strategist for Nomura, said on Bloomberg Surveillance. “I don’t want it to be worse. This is the country I earn my money in.”

The pound was already pressured by the steady rise in the US dollar before last week, in part because high energy prices were exaggerating the UK’s trade deficit and the Fed’s rate hikes were drawing cash toward the US. But the downward pull intensified after the administration of new Prime Minister Liz Truss rolled out plans to enact large-scale tax cuts in the face of an economic slowdown.

That caused a record stampede out of UK government bonds, with investors anticipating it will add to the government’s already sizable budget deficit. By stimulating the economy, the step would also be at odds with the Bank of England’s efforts to curb inflation, potentially forcing policy makers to raise interest rates even further.

On Monday, the Bank of England Governor Andrew Bailey attempted to soothe markets by saying the bank won’t hesitate to increase rates by as much as needed to rein in inflation. But the statement did little to bolster the currency, which slid afterward.

The comments quashed speculation that the Bank of England would enact an emergency rate hike to bolster the pound, with the bank saying it would take stock at its next scheduled meeting. Yet even if it had, analysts were dubious it would have had a major impact.

Strategists at Nomura lowered their target for the pound to $0.975 by year-end, anticipating it will breach parity by the end of November. Morgan Stanley strategists also revised their pound calls, putting a year-end target on the currency of $1.

“Tighter monetary policy which raises concerns about growth and fiscal sustainability, either directly or indirectly, is unlikely to see GBP strength in response,” Morgan Stanley currency strategist including David Adams wrote in a note to clients Monday.