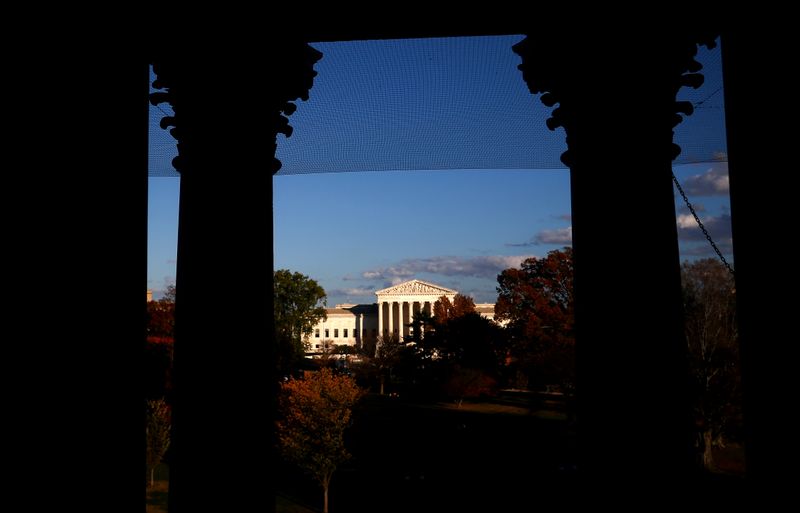 WASHINGTON (Reuters) – U.S. Supreme Court justices on Wednesday questioned the constitutional structure of a federal agency as they weighed a bid by shareholders of mortgage finance companies Fannie Mae and Freddie Mac (OTC:FMCC) to pursue legal claims arising from the 2008 housing crisis.

The justices heard an appeal by President Donald Trump's administration of a lower court ruling that let shareholders in Fannie and Freddie pursue a challenge to a 2012 agreement between the Federal Housing Finance Agency (FHFA) and the Treasury Department after the government's rescue of the two companies.

As part of the case, the justices appeared receptive to separate arguments made by shareholders that the constitutional structure of the FHFA, which is led by a single director who can be removed by the president only "for cause," is unlawful.

The 2012 agreement eliminated dividend payouts to various shareholders and required Fannie and Freddie to pay the U.S. Treasury an amount equal to their quarterly net worth each quarter, which now totals billions of dollars.

The administration in its appeal of a 2019 ruling by the New Orleans-based 5th U.S. Circuit Court of Appeals argued that the lawsuit should not be permitted but agreed with the challengers that FHFA's structure is unconstitutional because it infringes upon the power of president.

In 2016, Fannie and Freddie shareholders Patrick Collins, Marcus Liotta and William Hitchcock sued in a federal court in Texas arguing that the 2012 agreement, sometimes referred to as the "net worth sweep," exceeded FHFA's authority and that it should be thrown out.

The U.S. government in 2008 seized Fannie and Freddie, private enterprises set up by Congress, at the height of the financial crisis as they teetered on the brink of insolvency. The government took a majority stake in each and they were placed under the supervision of the FHFA, which was created at the same time.

Some justices appeared skeptical during the arguments about whether the 2012 agreement could be voided even if they deem the agency's structure unconstitutional.

Conservative Justice Neil Gorsuch said the remedy sought by the shareholders is "a big one and hard for us to swallow."

Liberal Justice Sonia Sotomayor said it would be "counterintuitive, perhaps illogical" to suggest the challengers could get anything more than a declaration that the agency's director could be removed by the president at any time.

Many questions by the justices focused more on the constitutional claims than on other legal grounds on which the shareholders challenged the 2012 agreement.

Conservative Chief Justice John Roberts questioned the premise of the lawsuit, noting that it was based on the notion that the shareholders were "left out in the cold and their holdings rendered worthless."

Roberts told the shareholders' lawyer David Thompson that he checked the share prices on Wednesday morning and that Fannie was trading at $2.69 and Freddie at $2.56 per share.

"Your shares are not worthless, they are worth something. … So doesn't that render your sort of nationalization rhetoric just that?" Roberts asked.

The Supreme Court in a similar case involving another federal agency, the Consumer Financial Protection Bureau, ruled in June that its single-director structure was unconstitutional.

Some justices questioned whether the court even needed to answer the constitutional question to decide the case, noting that the 2012 agreement was signed off on by an acting director of the FHFA, who could have been removed by then-President Barack Obama.

The FHFA is headed by a director who is appointed to a five-year term by the president subject to Senate confirmation. A ruling that the current structure is invalid would enable President-elect Joe Biden to replace the current Trump-appointed director, Mark Calabria, after taking office in January.