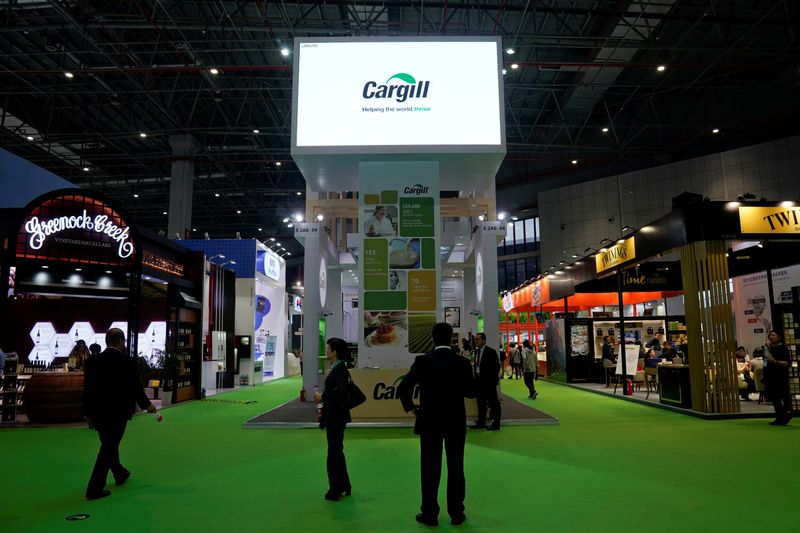 © Reuters. FILE PHOTO: A Cargill sign is seen during the China International Import Expo (CIIE), at the National Exhibition and Convention Center in Shanghai 2/3

The two companies are asking the nine justices to reverse a lower court ruling that allowed the lawsuit, brought on behalf of former child slaves from Mali who worked at the farms, filed against them in 2005 to proceed.

The case concerns a 1789 U.S. law called the Alien Tort Statute that lets non-U.S. citizens seek damages in American courts in certain instances. The business community has long sought to limit corporate liability under this law.

Some justices questioned whether the lawsuit actually made clear that company officials knew that the farms involved used child slavery.

"After 15 years, is it too much to ask that you allege specifically that the defendants … who are before us here, specifically knew that forced child labor was being used on the farms or farm cooperatives with which they did business?" conservative Justice Samuel Alito asked.

The lawsuits targeted the U.S. subsidiary of Swiss-based Nestle, the world's biggest food producer, and commodities trader Cargill, one of the largest privately held U.S. companies.

The plaintiffs accused the companies of aiding and abetting human rights violations through their active involvement in purchasing Ivory Coast cocoa and turning a blind eye to the use of slave labor on the farms despite being aware of the practice in order to keep cocoa prices low.

A federal district court in Los Angeles dismissed the lawsuit twice, most recently in 2017. That court found that the claims were barred by recent Supreme Court decisions that made it harder for plaintiffs to sue corporations in U.S. courts for alleged violations overseas.

The San Francisco-based 9th U.S. Circuit Court of Appeals in 2018 revived the claims, citing the allegations that the companies provided "personal spending money" to local farmers to guarantee the cheapest source of cocoa. The 9th Circuit found that the payments were akin to kickbacks and that the low price of cocoa was dependant upon the child slave labor.

The U.S. Chamber of Commerce and other business interests backed the two companies in the case, as did President Donald Trump's administration.

The Supreme Court in 2013 and 2018 cases curbed the ability of plaintiffs to sue corporations in U.S. courts under the Alien Tort Statute for overseas human rights violations. The court said in those rulings that there needed to be a strong connection between the alleged conduct and actions that took place in the United States. But the court did not definitively rule that companies can never be sued under that law.

Since the 2018 ruling, which was 5-4, the court has shifted further to the right with the appointment by President Donald Trump of conservative justices Brett Kavanaugh and Amy Coney Barrett.