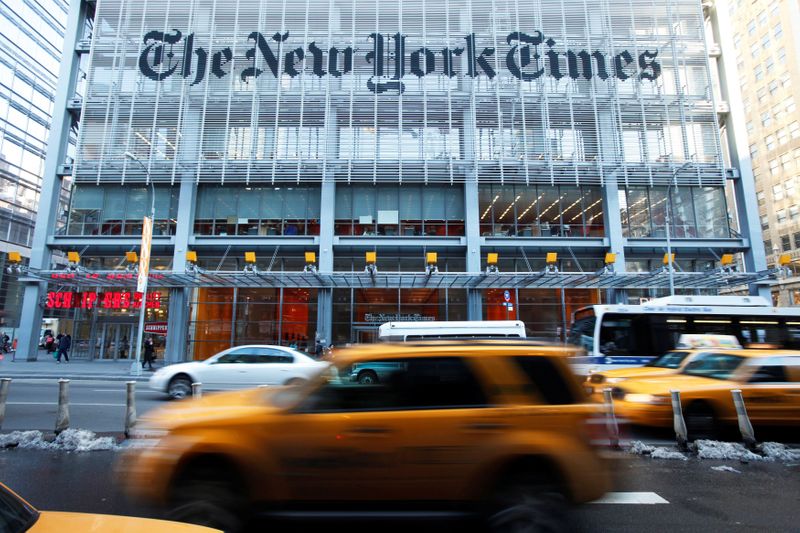 (Reuters) – The U.S. Justice Department under presidents Donald Trump and Joe Biden waged “a secret legal battle to obtain the email logs of four New York Times reporters,” including a gag order on executives, the newspaper reported on Friday.

The legal battle to gain access to the email logs of four of the journalists started in the last weeks of Trump’s presidency and sought to reveal reporters’ sources, the Times said https://nyti.ms/3uRBH9V.

“While the Trump administration never informed The Times about the effort, the Biden administration continued waging the fight this year, telling a handful of top Times executives about it but imposing a gag order to shield it from public view,” the report said, citing Times lawyer David McCraw.

The order prevented executives from disclosing the government’s efforts even to the executive editor, Dean Baquet, and other newsroom leaders, it said.

McCraw was quoted as saying the gag order, which he called unprecedented, had been in effect since March 3 but had now been lifted by a federal court.

The battle was over an effort by the Justice Department to seize email logs from Google (NASDAQ:), which operates the Times’s email system and had resisted the effort to obtain the information, the report said.

The Times reported https://www.nytimes.com/2021/06/02/us/trump-administration-phone-records-times-reporters.html on Wednesday that the Trump administration secretly seized phone records of four reporters spanning nearly four months in 2017 as part of a leak investigation.

CNN and the Washington Post previously reported that the Trump administration had secretly tried to obtain the phone records of some of their reporters over work they did in 2017.

The Justice Department did not immediately respond to a Reuters request for comment outside business hours.

The Times quoted Justice Department spokesman Anthony Coley as saying the department under Biden had moved repeatedly to delay enforcement of the order and it then “voluntarily moved to withdraw the order before any records were produced.”

A Google spokeswoman told Reuters the company was “firmly committed to protecting our customers’ data and we have a long history of pushing to notify our customers about any legal requests.”