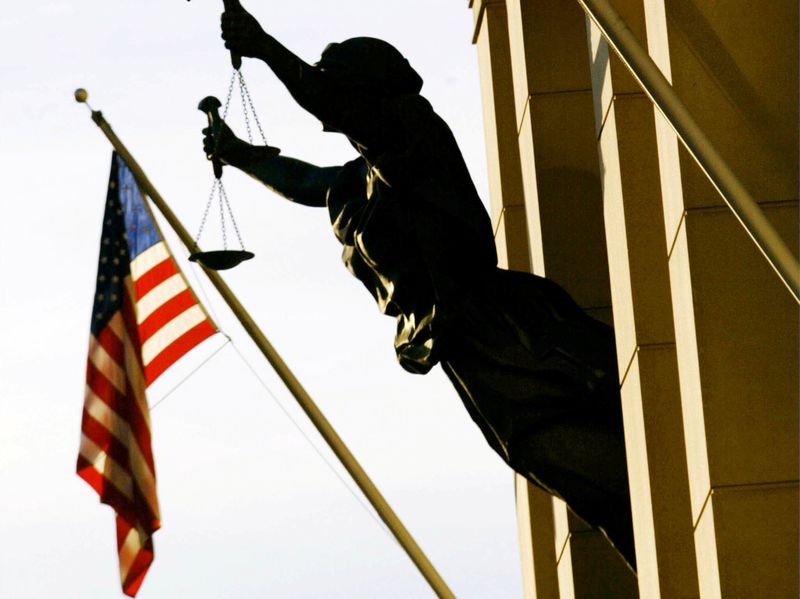 © Reuters. FILE PHOTO: THE AMERICAN FLAG FLIES NEXT TO A STATUE OF THE SCALES OF JUSTICE.

(Reuters) – U.S. insurers are taking a closer look at the recruiting and succession practices of corporate customers, worried about mounting lawsuits over a lack of diversity among top executives and directors, industry sources said.

Before pricing coverage, insurers want details about top-level succession planning and how companies recruit, they said.

"This is an operational risk that's not going to go away," said Amber Finch, a lawyer who negotiates insurance coverage for companies.

A California law set to take effect on Jan. 1 compounds the risk, she said. It will require publicly traded companies headquartered there to name board members from underrepresented communities.

Insurers are shifting practices after Minneapolis police killed George Floyd, a Black man, on May 25, setting off protests across the country. Since then, at least seven lawsuits have been filed against major U.S. companies alleging deficiencies in diversity practices.

For instance, a September lawsuit against Cisco Systems Inc (NASDAQ:CSCO) alleges board members breached their duty by not having a Black director. The plaintiff's law firm, Robbins Geller Rudman & Dowd LLP, is prominent in shareholder litigation. In a statement, Cisco characterized the case as one of several identical lawsuits filed against U.S. companies that already seem to have "strong diversity and inclusion initiatives."

D&O coverage has become more expensive in recent years due to more lawsuits over what plaintiffs describe as widespread race and gender discrimination, sexual harassment or general corporate malfeasance.

A 2018 U.S. Supreme Court decision compounded the issue by allowing some securities lawsuits to proceed in both state and federal courts. Insurers often pay for settlements, judgments and defending the cases.

"It's something that we're going to have to watch," Melley said.

Underwriters previously replied on public documents, such as proxy statements, he said. That is no longer enough.

Insurers want to see companies using recruiters and HR teams to vet a broad pool of candidates rather than relying solely on inside organizational charts, Williams said.

"The concern is around the lack of diverse leadership and how you're impacting the company when you go down the ranks," Williams said.