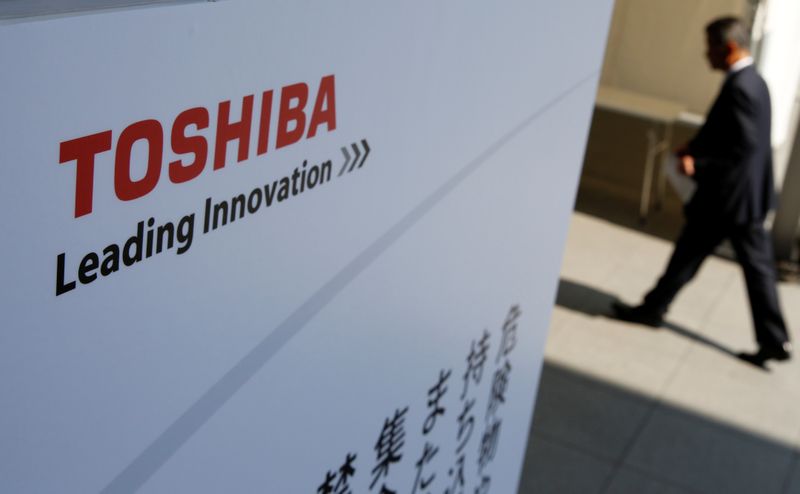 © Reuters. The logo of Toshiba is seen as a shareholder arrives at Toshiba's extraordinary shareholders meeting in Chiba

TOKYO (Reuters) -U.S. hedge fund Farallon Capital Management said on Friday it has asked Toshiba (OTC:TOSYY) Corp to convene an extraordinary shareholders meeting over the firm's investment strategy, the second call for an EGM in a week by major Toshiba investors.

Farallon, which owns a stake of more than 5% in Toshiba, joins top shareholder Effissimo Capital Management, which has a 9.91% stake, in calling for an emergency meeting.

Farallon said Toshiba should seek shareholder approval over what it said is a change in investment strategies.

Toshiba's recently announced plan to use approximately one trillion yen ($9.66 billion) for large-scale mergers and acquisitions is in marked contrast to the strategy that "focused on a disciplined capital policy and targeted growth through organic expansion and small-scale, programmatic M&A," the fund said in a statement.

It also pointed to Toshiba's poor M&A track record, saying the company has recorded a total of about 1.8 trillion yen ($17.4 billion) of impairment losses in the past 20 years resulting from "heedless growth investments."

A Toshiba spokeswoman said the company is aware of the fund's announcement and will make a regulatory filing once it officially receives the request.

Effissimo's call for an EGM is about launching a team of legal experts to investigate the firm's annual general meeting (AGM), at which it said the voting rights of several shareholders were compromised.

Reuters reported a Japanese government adviser told the Harvard University endowment fund that its vote at Toshiba's AGM could be subject to a regulatory probe should it vote against the firm's management.