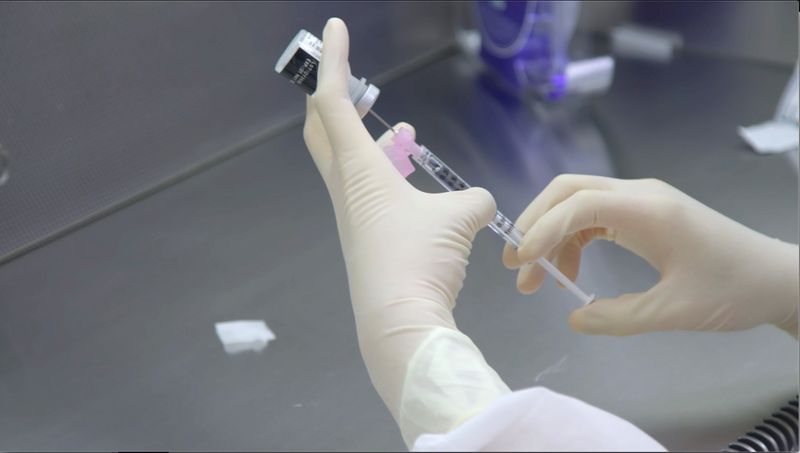 (Reuters) – The U.S. Food and Drug Administration (FDA) said on Friday it was working rapidly to issue an emergency use authorization for Pfizer Inc (NYSE:PFE)'s COVID-19 vaccine, setting the stage for the first Americans to be immunized as soon as Monday or Tuesday.

The FDA's decision making follows one of the last steps of its regulatory process: a panel of outside advisers on Thursday evening endorsed emergency use of the vaccine to help stem a pandemic that has killed more than 285,000 U.S. residents.

U.S. Department of Health and Human Services Secretary Alex Azar, which oversees the FDA, told ABC News that regulatory authorization should come within days and the federal government would work with the company to get the vaccine shipped out.

Pfizer has asked that the two-dose vaccine, developed with German partner BioNTech, be approved for use in people aged 16 to 85.

The companies last month said that a two-dose regimen of the vaccine was 95% effective in preventing illness from COVID-19, and detailed data released in the FDA's documents showed the vaccine began showing some protection even before volunteers received a second dose.

The vaccine is already approved in Britain, and people there began receiving the shots on Tuesday. Bahrain and Canada have also authorized the vaccine, and Canada expects to start inoculations next week.

The FDA has notified the U.S. Centers for Disease Control and Prevention and Operation Warp Speed so that they can execute their plans for timely vaccine distribution, it said in a statement. (https://

Another 2,902 U.S. deaths were reported on Thursday, a day after a record 3,253 people died, a pace projected to continue for the next two to three months until the vaccine can be widely distributed.

For months, U.S. President Donald Trump had pressured the FDA in tweets and press conferences to move more quickly, accusing staff and Pfizer of dragging their feet.

Shortly after the FDA's statement, the outgoing president criticized the agency for what he said was its slow handling of the vaccines and criticized FDA Commissioner Steven Hahn.

Trump said his "pushing" the agency had speed up new vaccine approval, but that the FDA was "still a big, old, slow turtle. Get the dam vaccines out NOW, Dr. Hahn @SteveFDA. Stop playing games and start saving lives!!!"

Pfizer shares rose 1% before the opening bell, while BioNTech U.S. shares were flat.