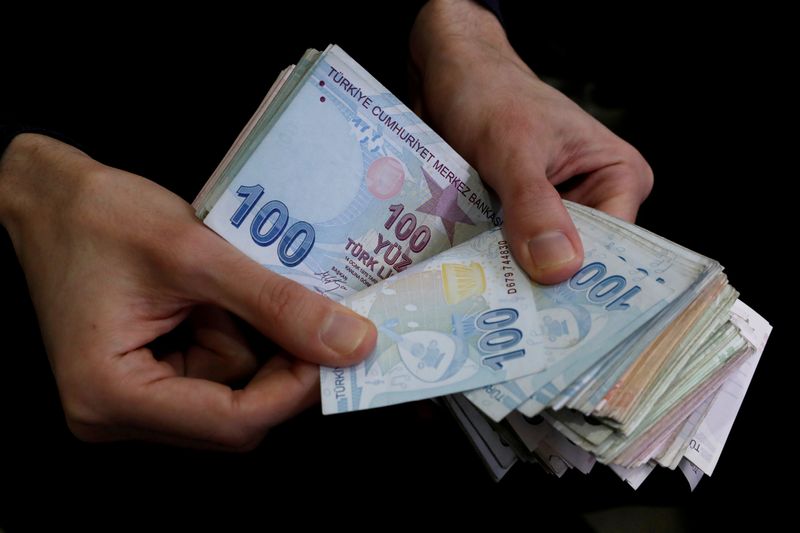 ISTANBUL (Reuters) – Turkey's lira slipped 1% on Monday, paring some gains after a four-month rally as rising U.S. bond yields gave the dollar a boost and as the finance minister defended his predecessor's policies that oversaw a sharp decline in FX reserves.

Data painted a mixed picture of the economy's recovery from the coronavirus pandemic with tourist arrivals still in a deep slump, and manufacturing confidence rising. Goldman Sachs (NYSE:) and Bank of America (NYSE:BAC) both upgraded GDP forecasts for 2021.

The dollar rebounded from multi-year lows on rising expectations of faster economic growth and inflation in the world's largest economy, putting pressure on the lira.

Turkey's currency has gained more than 20% since early November when a new central bank governor and a finance minister were named, boosting expectations of tight monetary policy and a more orthodox approach after years of perceived mismanagement.

Under the former finance minister, Berat Albayrak, who is President Tayyip Erdogan's son-in-law, the central bank's FX reserves were badly depleted due to a costly policy of state banks selling some $128 billion in dollars to support the lira.

The central bank under new Governor Naci Agbal says it will start to rebuild the reserves, which buffer against financial crisis, and which on a net basis fell by about three quarters throughout 2020.

Turkey's economy, hit hard in the second quarter of last year, has rebounded well and should record growth for 2020 as a whole. BofA raised its 2021 growth forecast to 4.6% from 4.1% despite what it called signs of a slowdown in the first quarter.

Wall Street bank Goldman raised this year's expectation to 6% growth from 4%, and also pencilled in an interest rate cut to 16.5% from 17% now due to the lira's recent strength.

In January, Turkey saw less than a third of the tourists from a year earlier. Tourism revenues, key to funding the country's chronic current account deficit, plummeted last year.