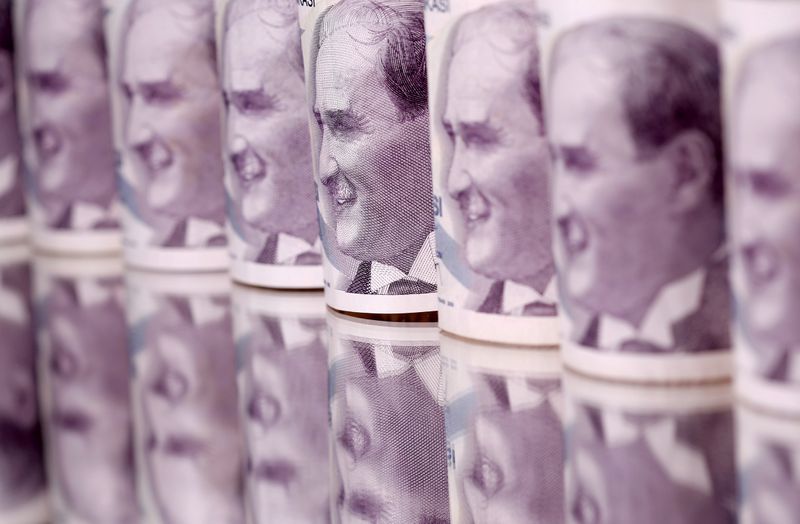 ISTANBUL (Reuters) – Turkey could dust off a range of strategies to defend its sliding lira after President Tayyip Erdogan abruptly replaced the central bank governor — including limits on currency swaps, interventions by state banks and even capital controls.

Erdogan's shock decision to fire the hawkish Naci Agbal and replace him with Sahap Kavcioglu, a like-minded critic of high interest rates, sent the currency down as much as 15% to near a record low in volatile early trade on Monday.

While Finance Minister Lutfi Elvan said Turkey would stick to free-market rules and a free-floating currency, analysts said the government would probably return to a less orthodox playbook used before Agbal cranked up rates to protect the lira and dwindling foreign reserves.

Many pointed to the costly market interventions that prevailed under former finance minister Berat Albayrak, Erdogan's son-in-law, who resigned the day after Agbal was appointed in November.

State-owned banks have sold some $130 billion to stabilise the lira in the last two years, supported by swaps from the central bank. As a result, the central bank's foreign currency fell by three-quarters last year, to a mere $11 billion.

But if foreign reserves cannot be topped up, and the lira keeps falling as investors expect a cut in interest rates, a balance of payments crisis looms – leaving few palatable options.

Current account deficits and steady outflows of foreign funds have dogged Turkey's import-heavy economy for years – although Agbal's rate hikes had reversed the outflow for a few months.

Turkey's external debt payment obligations are nearly $8 billion this month and will be a bit higher in June, central bank data shows.

Goldman Sachs (NYSE:GS) said a "rapid adjustment" in the current account may be necessary, since markets would be less and less likely to fund the deficits. It predicted that the currency interventions would restart as pressure on the lira builds.

Citigroup (NYSE:C), another Wall Street bank, said however that the risk of debt default would probably convince Turkish authorities to avoid unorthodox steps that might deter investors further.

Phoenix Kalen, analyst at Societe Generale (OTC:SCGLY), said: "We anticipate a return to the regime of soft capital controls that prevailed during Berat Albayrak's tenure, as policy makers try to stabilize rates and currency markets."

If the central bank's policy rate does rapidly ease from its current 19%, as some investors predict, regulators could again tighten the limits on banks' currency swaps in order to stem outflows and raise the cost of shorting the lira.

The bank watchdog expanded the limit to 10% of reserves in September, after cutting it to 1% in April.

A minority of analysts, including at SEB, said Turkey would eventually be forced to adopt capital controls, including new taxes on hard currency earnings and limiting local buying of hard currencies.

A deputy head of Erdogan's ruling AK Party, Nurettin Canikli, said on Monday capital controls were a "red line" not to be crossed.

Turks' holdings of foreign currency touched a record $236 billion in January, reflecting concerns about inflation near 16% – compared to a central bank target of 5% – and distrust in the lira, which has shed half its value in less than three years.

"We think the new central bank governor will return to the set of policies implemented by Albayrak before November 2020," he said, adding that Turkey had come to a "fragile and unreliable point in the eyes of foreign capital".