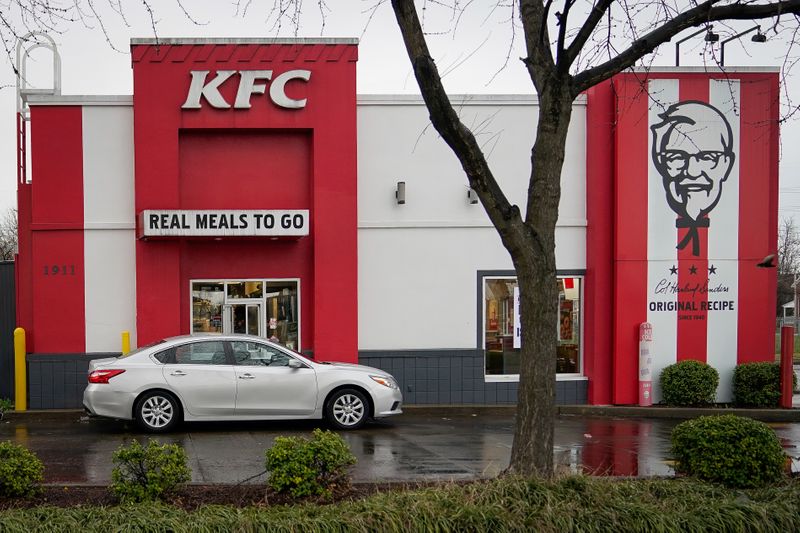 © Reuters. A vehicle waits at the drive-thru window of Kentucky Fried Chicken after a state mandated carry-out only policy went into effect in order to slow the spread of the novel coronavirus (COVID-19) in Louisville

NEW YORK (Reuters) – Kentucky Fried Chicken will switch to a new chicken sandwich nationally by the end of February, it said on Thursday, amid a fast food frenzy to win a share of the growing chicken market.

The company, owned by Yum Brands Inc, said its existing Crispy Colonel Sandwich was not "living up to our legacy as experts in fried chicken" so it will eventually be pulled off menus in favor of the KFC Chicken Sandwich.

McDonald's Corp (NYSE:MCD) on Monday confirmed that it will launch three new versions of a crispy chicken sandwich late next month.

With burger chains entering the fray, even poultry purveyors are revamping their menus.

In 2019, a social media-fueled feud over similar sandwiches between Chick-fil-A and Restaurant Brands International (NYSE:QSR) Inc's Popeyes sparked a rise in chicken sales across the industry and spurred other restaurants to announce competing menu items.

KFC's new sandwich will contain a quarter pound of white meat fillet – 25% larger than in its existing sandwich – that is double-breaded, fried and served on a new buttered brioche bun with thicker crinkle-cut pickles. It includes mayonnaise or spicy sauce.

The restaurant chain will roll out the new sandwiches beginning on Thursday in Chicago, Kansas City, Louisville, Portland, St. Louis, Sacramento, San Francisco, Seattle and Tulsa, expanding to all 4,000 U.S. locations by the end of February, it said in a statement.

KFC's new sandwich will cost $3.99, in line with those from competitors.