It is indeed hard to argue the point. As the article explained:

“A majority of investors finally agree the V-shaped recovery is at play,” according to the Bank of America Global Fund Manager Survey. Plus, a record percentage of money managers believe that global growth is at an all-time high.” 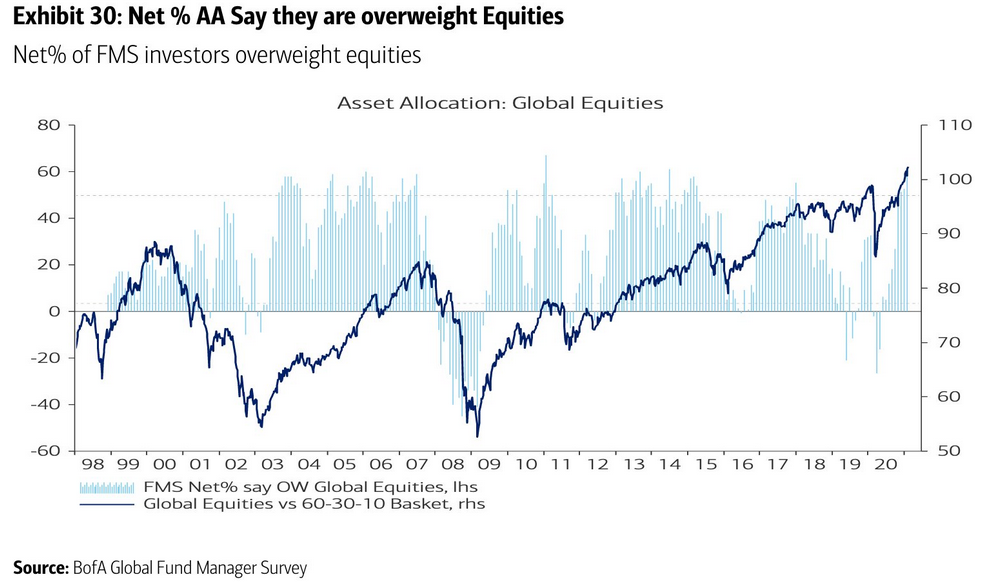 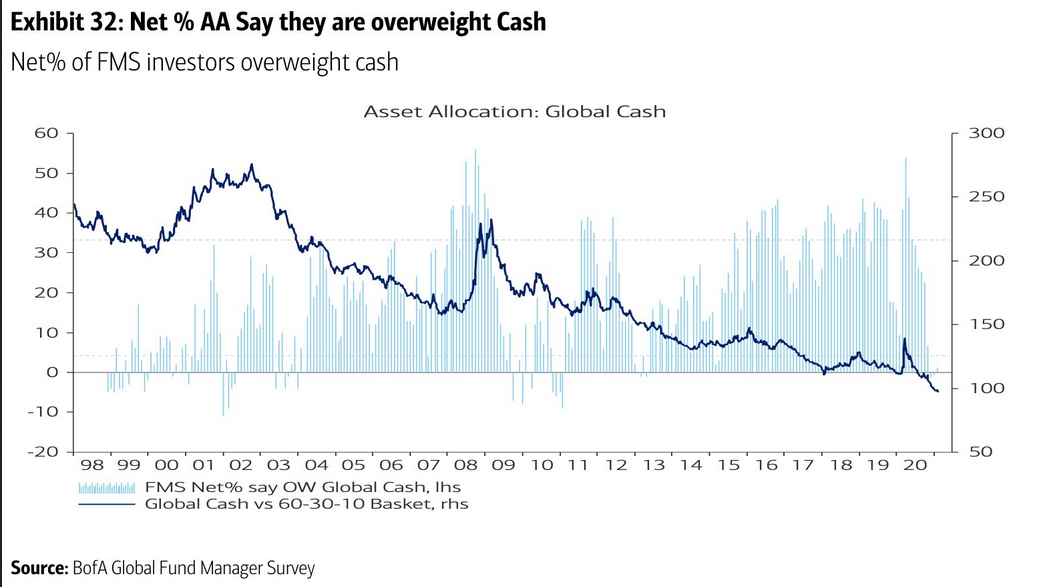 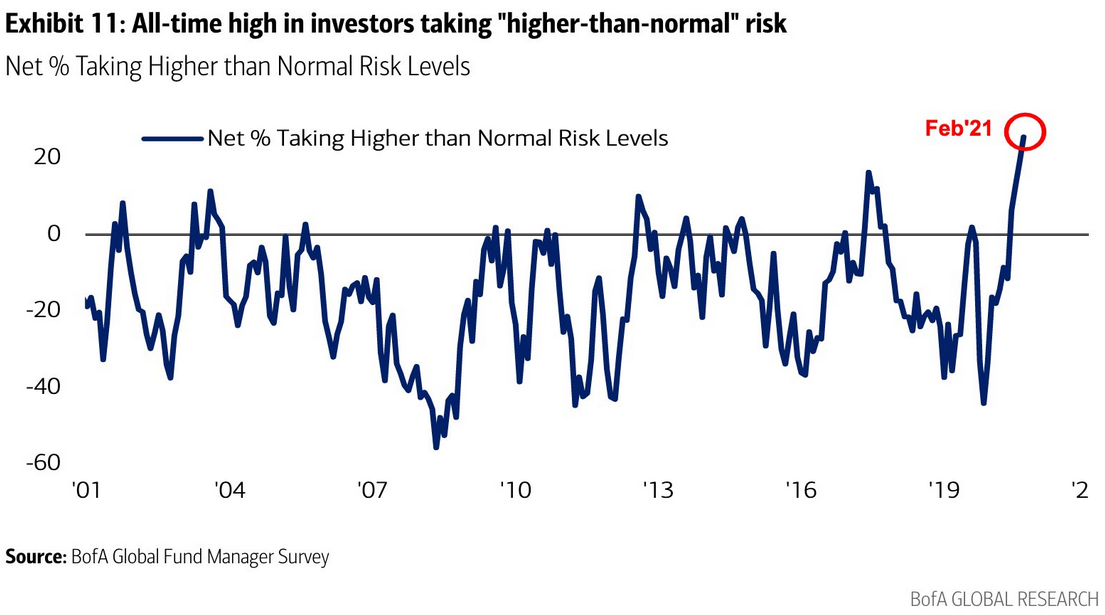 As the survey notes:

“Stocks are hovering around all-time highs as investors bet on a successful rollout of the Covid-19 vaccine, economic reopening, and expectations for more fiscal stimulus.”

What could go wrong?

“According to [Hyman] Miskey, events leading up to a crisis start with a ‘displacement,’ some exogenous, outside shock to the macroeconomic system. The nature of this displacement varies from one speculative boom to another. An unanticipated change to monetary policy might constitute such a displacement. Some economists who think markets have it right and governments wrong, blame ‘policy switching for some financial instability.” – Charles Kindleberger

While it is clear that a “speculative mania” exists, such will remain the case until an “exogenous event” creates financial instability. As the survey noted, there are “risks” to the outlook.

Given ample evidence that “everyone is in the pool,” markets are vulnerable to 3-risks.

The reality is that all three could be a simultaneous problem. Given the high correlation between inflation and interest rates, higher yields will attract reserves from countries faced with economic weakness and negative-yielding debt. Such would lead to a stronger dollar quickly reversing the tailwinds that have supported the equity rally since March.

We think this is potentially the most significant risk we face currently and something we noted just recently.

The one thing that always trips of the market is the one thing that no one is paying attention to. For me, that risk lies with the US Dollar. As noted previously, everyone expects the dollar to continue to decline, and the falling dollar has been the tailwind for the emerging market, commodity, and equity ‘risk-on’ trade. Whatever causes the dollar to reverse will likely bring the equity market down with it.” 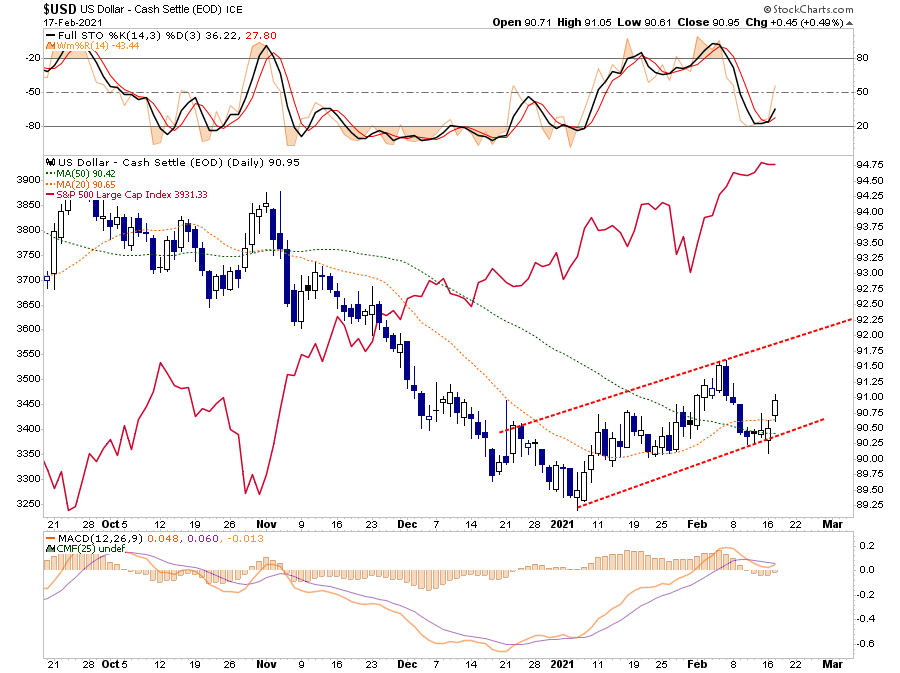 Very quietly, the dollar has been rising and recently broke above and successfully held its 50-dma. With a substantial net short position outstanding, a further rise could trigger shorts to begin covering, pushing the dollar up further. 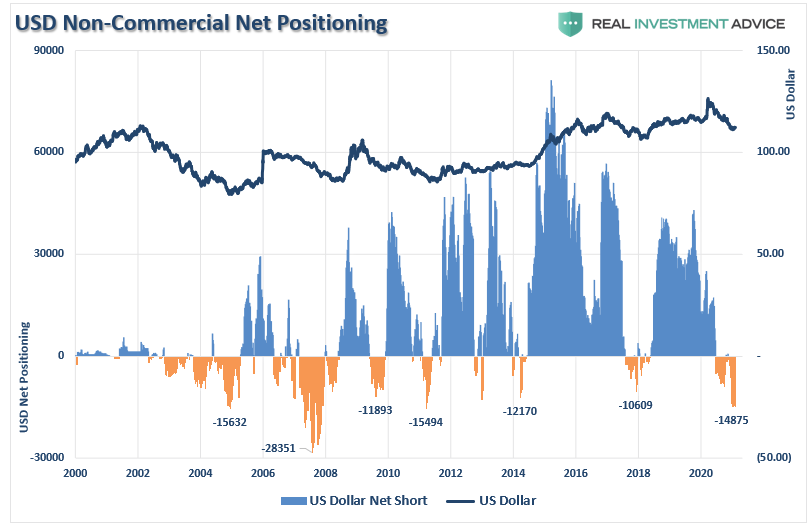 As noted, such would not support equity markets due to the non-correlation between the dollar and equities. Most importantly, a surging dollar, with rising interest rates, could put a severe dent in the “reflation trade.”

There is also the problem of monetary policy. As discussed in “Moral Hazard,” investors are chasing risk assets higher because they believe they have an insurance policy against losses, a.k.a. the Fed.

However, this brings us to the one question everyone should be asking:

“If the markets are rising because of expectations of improving economic conditions and earnings, then why are Central Banks pumping liquidity like crazy?”

Central Bank interventions, while boosting asset prices may seem like a good idea in the short-term, in the long-term has harmed economic growth. As such, it leads to the repetitive cycle of monetary policy.

If you don’t believe me, here is the evidence. 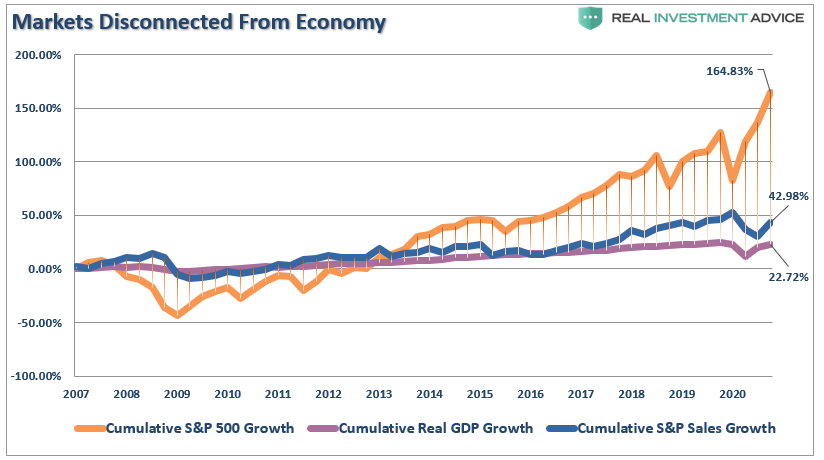 The stock market has returned more than 164% since the 2007 peak, which is more than 3.8x the growth in corporate sales, and 7.5x more than GDP.

But, for the 10% of the population that owns 90% of the stock market, the sentiment is now getting extreme.

The Problem With Low Rates

However, whenever there is a discussion of valuations, it is invariably stated that “low rates justify higher valuations.”

Maybe. But the argument suggests rates are low BECAUSE the economy is healthy and operating near full capacity. However, the reality is quite different, as the always insightful Dr. John Hussman pointed out:

“Make no mistake: the main contributors to the illusion of permanent prosperity have been decidedly cyclical factors.

Again, when interest rates are low because growth is also low, no valuation premium is ‘justified’ at all. In the present environment, investors are inviting disastrous losses by paying the highest S&P 500 price/revenue ratio in history. They are also paying the highest median price/revenue ratio in history across S&P 500 component stocks (more than 50% beyond the 2000 peak, because extreme valuations in that episode were focused on much narrower subset of stocks than at present). Glorious past returns and record valuations are a Potemkin Village with a barren field behind it.”

Valuation measures suggest investments made today will not provide returns much above zero over the next decade.

That is just the math.

Such brings me to something Michael Sincere’s once penned:

“At market tops, it is common to see what I call the ‘high-five effect’ — that is, investors giving high-fives to each other because they are making so much paper money. It is happening now. I am also suspicious when amateurs come out of the woodwork to insult other investors.”

The reality is that strongly rising asset prices, mainly driven by emotional exuberance, “hide” investment mistakes in the short term. Poor, or deteriorating fundamentals, excessive valuations, and rising credit risk often get ignored as prices increase. Unfortunately, it is only after the damage is done the realization of those “risks” occurs.

“Most investors believe the Fed will protect their investments from any and all harm, but that cannot go on forever. When the Fed attempts to extricate itself from the market one day, that is when the music stops, and the blame game begins.”

No Reason To Be Bearish

“In every stock market cycle there is a dominant investor who captures the market’s zeitgeist by incorporating and reflecting the ideas and beliefs of the times.” – Doug Kass

Whether it was the Janus 20 fund in the late ’90s or ARK Investments currently, there was always a belief “this time was different,” and some transformative technology had changed market dynamics.

Currently, there seems to be “no reason” to be bearish on the markets. Rates are low, monetary policy is flowing, and there are hopes the economy will eventually recover. However, as noted, there are certainly risks to that outlook.

It is important to remember that markets run in full cycles (up and down). While the bullish “up” cycle lasts twice as long as the bearish “down” cycle, the damage to investors is not a result of lagging markets as they arise but in capturing the inevitable reversion. Such is something I will discuss in more detail in an upcoming article.

Currently, the markets are indeed in a liquidity-driven upcycle. With margin debt at records, stock prices in a near-vertical rise, and “junk bond yields” at record lows, the bullish media continues to suggest there is no reason for concern.

But maybe that is just the reason to be concerned.

“The object of speculation may vary widely from one mania or bubble to the next. At a late stage, speculation tends to detach itself from really valuable objects and turn to delusive ones. A larger and larger group of people seeks to become rich without a real understanding of the processes involved. Not surprisingly, swindler and catchpenny schemes flourish.” – Kindleberger 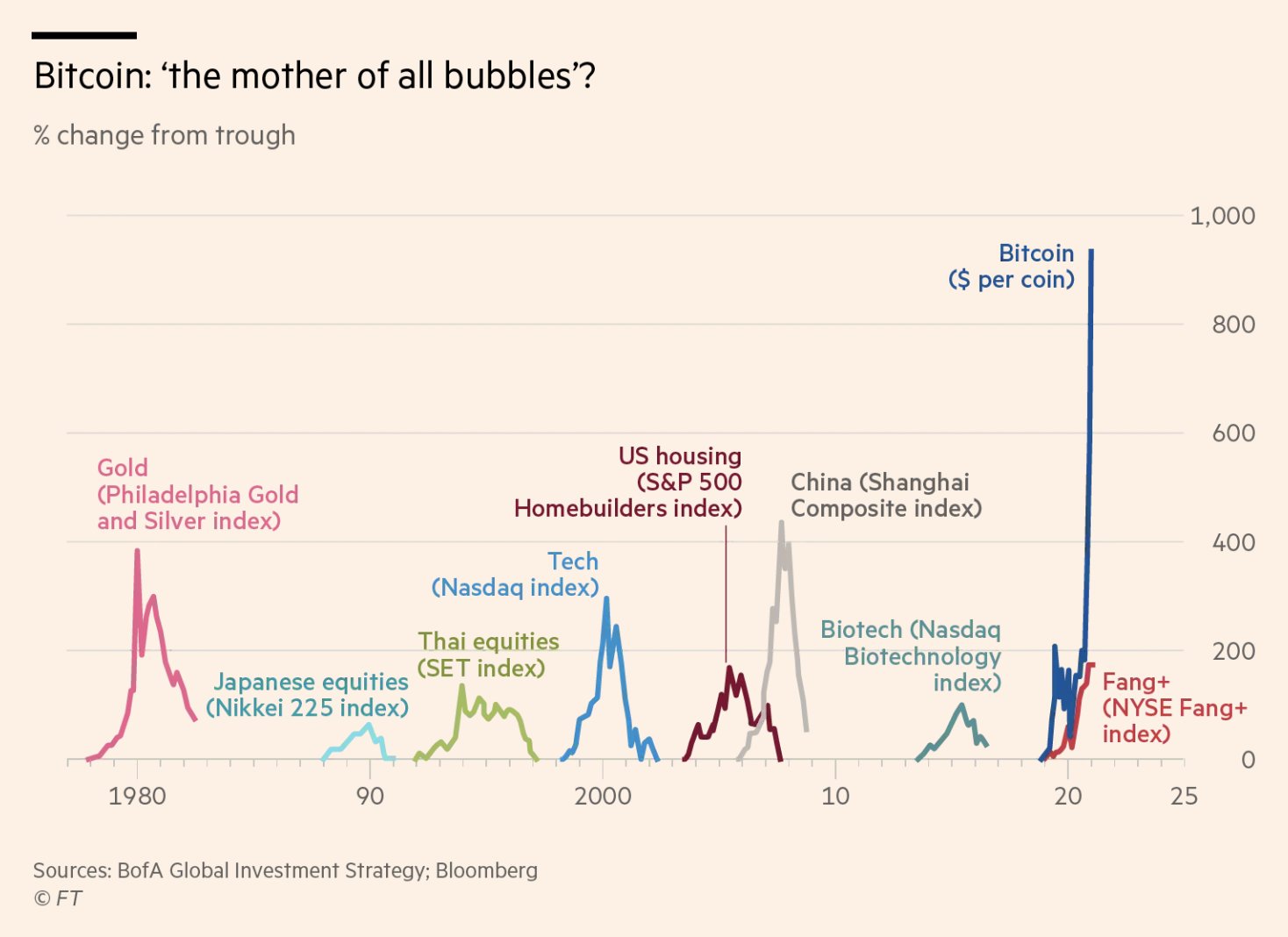 Bitcoin The Mother Of All Bubbles

When “everyone is in the pool,” it is an excellent time to remember a basic premise of investing from our post on trading rules:

“Opportunities are made up far easier than lost capital.” – Todd Harris