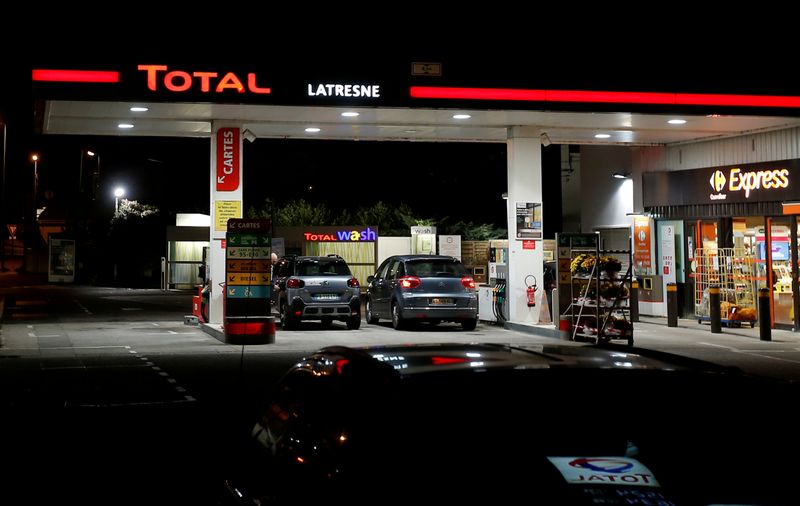 LONDON (Reuters) – For Big Oil, coffee and chocolate could be the new black gold.

Under pressure from investors and governments alike to cut emissions, major European oil companies are ploughing billions into renewable energy but are struggling to craft business plans that promise the returns shareholders have come to expect.

Europe's big oil firms, however, have another card to play: their vast global networks of filling stations.

BP (NYSE:BP), Royal Dutch Shell (LON:RDSa) and Total all say they are betting on higher profits from sales of groceries and snacks at their retail networks, which will still be an essential port of call for motorists in an electric era.

Paying at the pump to fill up with petrol may only take a few minutes, but even with the fastest electric vehicle (EV) chargers, customers would have at least 10 to 15 minutes to kill – plenty of time to grab a coffee and do some shopping.

While the so-called marketing operations of big oil firms – retail sales of fuel, lubricants, groceries and TV dinners – usually contribute a smaller slice of profits than oil and gas production, they typically have higher margins.

The renewable energy and power businesses oil companies are moving into, however, tend to have lower returns on investment, making it important for firms such as BP and Shell to find ways to boost their overall returns in low-carbon economies.

BP and Shell are also betting that daily contact with tens of millions of customers will give it masses of data that it can use to tailor sales for shoppers in small towns, cities or even specific petrol stations throughout the world.

While there are relatively few electric cars on the road now, oil companies have already had a glimpse of the potential of their retail networks during coronavirus lockdowns this year.

Fuel sales slumped as travel restrictions kicked in, but people still nipped to nearby petrol stations with convenience stores to stock up on daily necessities.

In fact, Shell's retail division, known as "marketing", which has the world's biggest network of filling stations, had its best quarter on record in the three months to Sept. 30, bringing in $1.6 billion in adjusted earnings.

So far in 2020, Shell's marketing division has contributed 60% of its overall earnings, which are traditionally dominated by its upstream oil and integrated gas businesses.

Huibert Vigeveno, Shell's head of refining, chemicals and marketing, said the company holds a daily call to check on customer preferences for anything from engine oil to croissants so it can constantly adapt.

"Having 45,000 retail sites over more than 80 countries allowed us to learn very fast," he told Reuters.

"It started in January, when we saw what was happening in China and how consumers were behaving. And we shared that immediately with all the 80 countries in which we operate."

Shell's marketing profits were also helped by strong sales of premium fuels, which have higher margins, and lubricants.

BP and Total benefited from a boost at their retail divisions during the pandemic months too, helping to plug revenue shortfalls from lower fuel sales and reinforce their plans to expand rapidly into convenience stores and EV charging.

"We saw during the pandemic people shopping online and topping up in local stores like ours, but it's a long-term trend, too," said Emma Delaney, BP head of customers and products.

Total's Chief Financial Officer Jean-Pierre Sbraire told investors in October that retail sales in Europe were back at pre-pandemic levels in the third quarter, even though fuel sales remained very weak.

BP's profit margins from convenience stores have risen 8% a year since 2015 and they delivered a gross margin of more than $1 billion in 2019, a figure the company aims to more than double by 2030, Delaney told Reuters.

BP's return on investment – or the return on average capital employed – at its convenience and mobility business, which includes sales of fuel and lubricants as well as its stores, was more than 20% in 2019.

Shell too had a return on investment of over 20% at its marketing division, which includes retail, business-to-business fuel sales and lubricants, and Vigeveno said it expects the business to grow 6% to 7% a year until 2025 and beyond.

Return on investment has been in the spotlight since oil majors such as BP announced this year that it plans to cut its fossil fuel production and invest more heavily in low-carbon energy sources such as wind and solar power.

Shell is also looking to accelerate its shift towards low-carbon energy and is due to announce its long-term transition strategy in February.

While big oil firms typically target a return on oil investments of about 15%, returns on low-carbon electricity are expected to be far lower and investors are wondering how they will square the circle.

IS DATA THE NEW OIL?

When it comes to retail, fuel sales already produce lower profit margins than convenience stores sales, which are often in partnership with well-known grocery brands, and that's one of the reasons for the push into areas dominated by supermarkets.

BP works with Marks & Spencer (OTC:MAKSY) in Britain while Shell has a partnership with British celebrity chef Jamie Oliver to offer a range of deli food. In the United States, BP has teamed up with food and drink outlet ampm.

During the months of the pandemic, convenience sales at hundreds of sites were also helped by deliveries to homes using online apps such as Deliveroo and Uber (NYSE:UBER) Eats, Vigeveno said.

BP estimates that more than half the customers who visit Marks & Spencer at its filling stations come for convenience shopping only. Shell's Vigeveno, meanwhile, said half of their sales in northwest Europe were non-fuel.

Even with a retail push, fierce competition among power companies, supermarket giants such as Tesco (OTC:) in Britain or Carrefour (PA:CARR) in France and new entrants in the EV charging sector could also narrow profit margins in the future.

And with oil consumption possibly already near its peak, energy companies will need to radically rethink their retail businesses to keep making money.

"To successfully adapt, fuel retailers must embrace a new mindset. Making modest changes or tweaks to the business will not suffice," said Boston Consulting Group's Rubeis, adding that the customer data they amass could be crucial.

BP aims to double the daily number of "customer touchpoints" in its retail business over the next decade to 20 million while Shell is aiming for 40 million by 2025 from 30 million now.

"Retail is the only thing in the oil and gas value chain that gets you closer to the customer. If you want to have insight into the future trends of mobility, energy transition and so on, that's the only thing that can get you data," Rubeis said. "Customer data is the new oil."