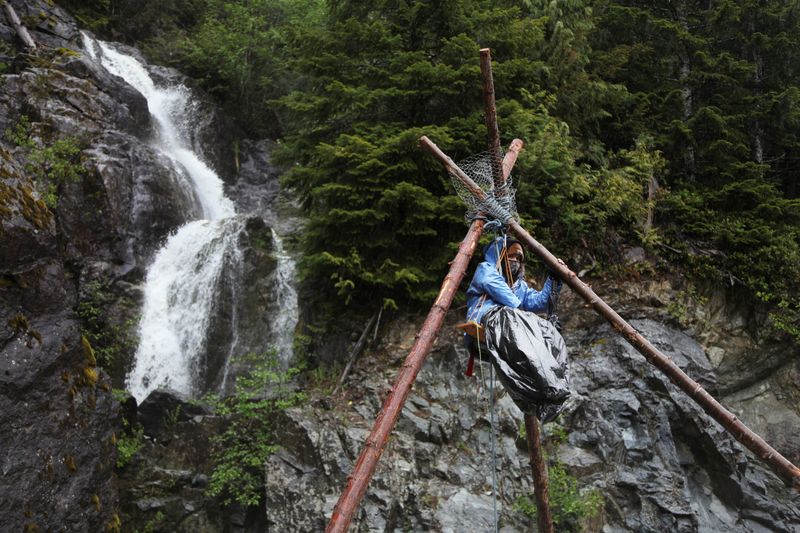 © Reuters. A woman, who is among activists trying to stop the logging of old growth timber, sits in a tripod perch in order to hinder her arrest on a blockade at Waterfall camp in the Fairy Creek area of Vancouver Island, near Port Renfrew, British Columbia, Canada

CALGARY, Alberta (Reuters) – Nolan Paquette started working part-time at his local sawmill more than 20 years ago while still at school, pushing a broom on the clean-up team. Now 38, Paquette drives trucks and operates machinery at the same Western Forest Products-owned mill in Duke Point, Nanaimo, the third generation of his family to work in forestry on British Columbia’s Vancouver Island.

He is one of 38,000 workers in Canada’s westernmost province whose job, according to the industry, depends on the logging of towering old-growth trees, such as cedars, Douglas firs and western hemlocks aged at least 250 years, and in some cases more than a thousand.

The dispute over felling British Columbia’s ancient forests has been thrust into the limelight by a months-long blockade of private logging company Teal Jones in the Fairy Creek watershed on western Vancouver Island. Protests that started last August have intensified in recent weeks, leading to more than 150 arrests.

Environmentalists camped out in the dense coastal rainforest say they are fighting Canada’s version of the ivory trade. This weekend activists urged more supporters to carpool and convoy to Fairy Creek headquarters to show solidarity in a last stand.

The forestry industry says protestors are endangering the livelihoods of thousands of hardworking families.

The Pacheedaht First Nation, in whose territory Fairy Creek lies, are divided on the issue.

“It would devastate the economy if we lost old growth,” Paquette said, referring to environmentalists’ calls to ban the practice. “You’re not going to find a C$31 an hour ($26) unskilled job on the island without forestry.”

British Columbia used to be the epicentre of the North American lumber trade thanks to its vast untouched forests and it still supplies nearly half of Canada’s softwood lumber. Nationally, the industry contributed C$24 billion ($19.8 billion) to Canada’s nominal GDP in 2019, and exports worth C$33 billion.

But reliance on old-growth logging, which makes up a quarter of B.C.’s annual timber harvest, is becoming an increasing problem as the ancient forests shrink.

Some coastal B.C. sawmills – like Duke Point – are set up to process only large to very large trees.

Fairy Creek protestor Shambu, 47, said it is “inevitable” old-growth logging will come to an end as the resource disappears and that government funding is needed to help the industry transition to logging and processing planted forests.

“Do we leave these loggers to find a living in a dying industry, or do we help them? Either we sort out transition funding now, when there’s still a fraction of old growth left, or when there’s none,” Shambu, who joined the Fairy Creek blockade last August, said.

Since then the camps have grown from nylon tents to buses with wood-burning stoves and water boilers, with hundreds of people passing through them.

But protests are also raising questions over whether environmentalists should tell indigenous people how to manage their resources.

The Pacheedaht First Nation has said it does not welcome third-party activism in its territory, while elder Bill Jones supports the blockades and says protesters are there at his invitation. He accused the band council of “thinking the forest is a commodity.”

In a statement Surrey, Vancouver-based Teal Jones said harvesting work within its tree farm licensing area was responsible and sustained hundreds of jobs. Throughout the protests the company has continued to log what trees it can, and gained access to the nearby Caycuse watershed in late May after police cleared blockades there.

Last week the left-leaning B.C. government released details of a plan to modernise the forestry industry. It continues to work on implementing the recommendations of an independent review published last year, which called for a “paradigm shift” to protect old growth and defer logging in certain areas.

The province will announce deferrals in more old-growth areas later this summer, B.C. Minister of Forests Katrine Conroy told Reuters, adding her goal was to consult with First Nations and protect forestry jobs as well as ancient forests.

“It’s a balance,” she said. “I don’t believe we have to give up the environment for the economy.”

B.C.’s lumber trade was built on valley-bottom forests – the cathedral-like groves seen in tourist brochures – as loggers focused on the most lucrative and accessible trees. It has been understood for decades a transition would be needed as they run out, said Ken Lertzman, professor of forest ecology at Simon Fraser University in Burnaby, B.C.

“There’s no question it’s important to the industry from an economic perspective, but that doesn’t mean you don’t need to bear the cost of protecting it anyway,” he said.

An unprecedented rally in lumber due to pandemic-induced supply chain interruptions and homeowner demand is starting to drag on North American housing starts, though it has given logging companies a chance to repair balance sheets after a number of tough years.

“These prices make it really difficult to say to people we are going to walk away from this resource,” said John Innes, dean of forestry at the University of British Columbia.