Will the Senate vote to approve $2,000 checks to Americans this week? Or, will that idea die in the upper chamber of Congress? Some economists say an extra $2,000 boost could potentially give the economy more firepower in 2021.

The House passed a bill Monday raising the payment to $2,000, and Senate Minority Leader Chuck Schumer will try to pass the House bill by unanimous consent Tuesday. Republicans are expected to object, which might mean a vote in a few days that would require 60 senators.

It remains to be seen what happens in Washington. However, Goldman Sachs raised its estimate for Q1 gross domestic product (GDP) growth to 5% from its previous 3%, saying consumers remain “resilient,” and that a “vaccine boost” could bring a bounce for industries hardest hit by the virus. It also sees full-year 2021 growth of well above 5%.

If that does happen, it would be the best calendar year growth for the U.S. economy since 2000. The average analyst estimate is more in the 4% category, but that’s off an average estimate for a 3.5% GDP drop this year.

An extra $2,000 in peoples’ wallets might have analysts circling back to their desks to update those estimates. Remember, consumer spending is about 70% of the economy. It’s not looking too great as we go into the end of the year, with retail sales last month coming up shy and some on Wall Street worried that the latest wave of shutdowns could hurt December employment growth.

However, keep in mind that holiday shopping may have started earlier this year due to more folks working from home. That could have had the effect of spreading it out over a longer timeframe so that no one month stands out.

For things to really improve on the consumer front, investors might have to count on vaccine rollout being swift and smooth. As we’ve been saying, that’s a vast logistical challenge. However, it also didn’t look like Congress could pass a stimulus in a lame-duck session, but it got done. So where there’s a will, perhaps there’s a way with the vaccine as well. It’s good to see that more than 2 million Americans already have been vaccinated, according to media reports, but some medical experts think progress is slower than they had hoped.

Getting back to this week in the market, there’s a little data on the way tomorrow in the form of pending home sales for November. This category looks a bit soft, with the Briefing.com consensus pointing toward a possible 0.5% decline from the previous month, which itself saw a 1.1% drop.

When you examine pending sales, they should be seen as a barometer of future home purchases. Right now, it looks like demand for homes might be exceeding supply. That means prices are likely to keep rising, and it could be good news for home builders like Lennar (NYSE:LEN), D.R. Horton (DHI), and KB Home (NYSE:KBH). Shares of all three were down on Monday, however.

Other data to prep for include weekly crude production and supply, which we’ll discuss more tomorrow, and weekly initial jobless claims.

Remember, it’s a short week, with everything shut down on Friday. With that in mind, it wouldn’t be surprising to see more of a defensive posture working its way in over the next few days. Already, there are some signs. The 10-year yield fell slightly to around 0.92% on Monday, crude prices dropped, and the Cboe Volatility Index (VIX) staged a small rally. None of these moves looked too dramatic, but bear watching in coming days for insight into investor psychology.

On Monday, the so-called “mega-caps” took the driver’s seat to push major indices to new highs (see more below). It didn’t seem like there was much news causing this, and volume was a bit lower than normal on the New York Stock Exchange (NYSE), which stands to reason considering the time of year.

Other sectors getting a nice bid yesterday included “reopening” ones like hotels, theme parks, and airlines. It looks like air travel was pretty strong over the holiday, so some investors may have been reacting to that.

Speaking of air travel, Boeing (NYSE:BA) has a milestone today as American Airlines (NASDAQ:AAL) puts a 737-MAX into passenger service for the first time since the entire fleet got grounded in March 2019. It’s been a long road back for the jetliner and for BA, whose stock remains well below where it was before the tragic crashes. 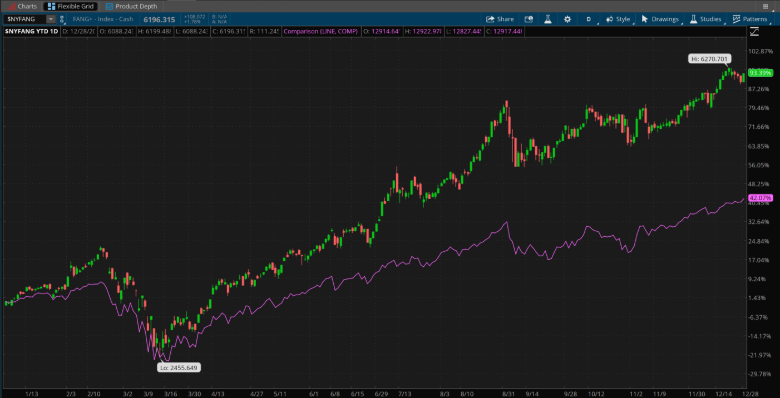 CHART OF THE DAY: FAANGs and FRIENDS. This year-to-date chart of the NYSE Faang+ Index ($NYFANG—candlestick) includes the five “FAANGs” along with five other similar stocks like Nvidia (NASDAQ:NVDA) and Tesla (NASDAQ:TSLA). As the chart shows these 10 stocks have far outperformed the Nasdaq (COMP—purple line) in 2020, but some analysts wonder what they can do for a repeat in 2021. Data sources: ICE (NYSE:ICE), NYSE, Nasdaq. Chart source: The thinkorswim® platform from TD Ameritrade (NASDAQ:AMTD). For illustrative purposes only. Past performance does not guarantee future results.

Profit-Taking? We Hardly Knew You! A week or two ago, the thinking on Wall Street was that the last two weeks of 2020 might feature some profit-taking after this long rally. That probably made sense when you consider the S&P 500 Index is up around 14% since Nov. 1 and we have a new administration in Washington next month that could try to bring tax changes that might affect investors. The idea was that some people might close out profitable positions in the final week of 2020 to take advantage of doing that under existing tax law.

Well, three days of trading remain this year, but if Monday was any sign, the analysts who focused on possible profit taking look like they might have been wrong. It feels more like a “trend is your friend” type of mood, though of course that can change today through Thursday. In fact, the same sectors (Communication Services, Info Tech) that came to the party this fall remained on the dance floor Monday in helping lead the rally. It’s just one day, obviously, and things could change. Still, it gives you a sense of just how locked in these sectors continue to be. At the same time, some of the most high-flying “stay at home” stocks did drop on Monday, which could mean a little profit-taking took place.

FAANGs Lead Way: A simple glance at Monday’s rally shows just how pivotal the so-called “FAANG plus one” stocks were—the “plus one” being Microsoft (NASDAQ:MSFT). Apple (NASDAQ:AAPL) led the gains with a march to new all-time highs above $136 a share, but Amazon (NASDAQ:AMZN) and Facebook (NASDAQ:FB) also rose sharply. After a 2019 in which some analysts said FAANGs had already had their day in the sun and it was time to move on, 2020 was a banner year for these six stocks. AAPL is up nearly 86% year-to-date, while MSFT is up an impressive 43%. FB and Alphabet (NASDAQ:GOOGL) are up 34% and and 33%, respectively, despite the challenges they both faced this year with congressional investigations into their competitive practices. Meanwhile, AMZN is up 78% in 2020 despite flattening over the last few months. Netflix (NASDAQ:NFLX) is in the middle with gains near 57%, getting a nice benefit from the “stay-at home” economy.

Can FAANGs Keep Rolling in 2021? As we’ve noted before, COVID-19 likely helped most or all of the FAANGs quite a bit this year, in part because they all could thrive in a shutdown economy and because when the going gets tough, investors tend to embrace known entities. The lack of competition from any other market, like fixed income, along with low interest rates that encouraged many to put their money into stocks, also helped the FAANGs.

The question is whether this is a new beginning or if the supposed “fade into the sunset” just got pushed back a year or two. Many analysts will tell you these companies have more challenging years ahead simply from the perspective of tough comparisons and people having high expectations. Some on Wall Street think the next wave of the Tech rally might be more focused on chip or cloud stocks. We’ll talk about this more in the coming days and weeks.