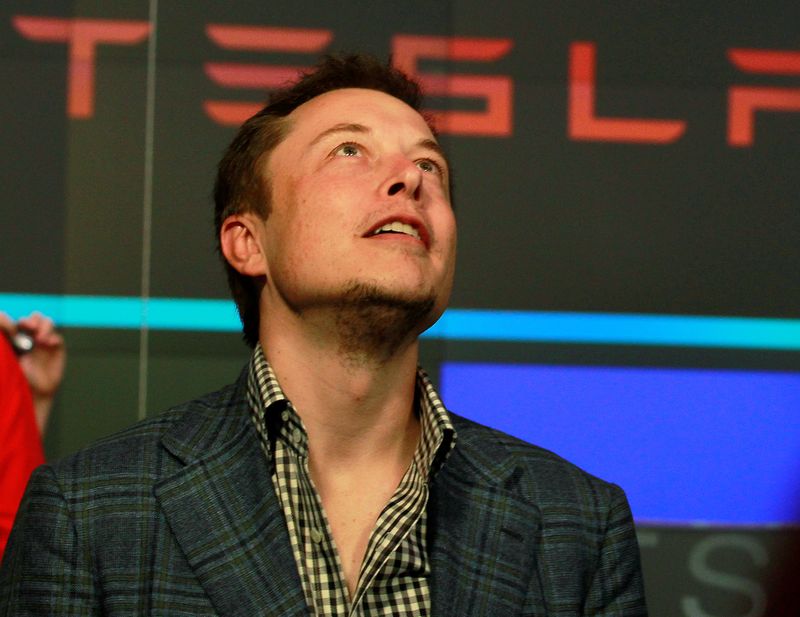 (Reuters) – Shares of Tesla (NASDAQ:TSLA) surged to a record high in heavy trading on Thursday, with the electric car maker's stock market value exceeding Facebook (NASDAQ:FB)'s for the first time.

Shares in the company led by Elon Musk jumped nearly 8% to end the session at $816, putting its market capitalization at $774 billion and making it Wall Street's fifth-most-valuable company, just behind Google-parent Alphabet (NASDAQ:GOOGL) and ahead of Facebook.

Facebook's stock market value was $765 billion after its shares rose about 2%, according to Refinitiv data.

Over $39 billion worth of Tesla's shares were bought and sold during the session, a record for Tesla and more than the next three most traded companies combined, which were Apple (NASDAQ:AAPL) , Alibaba (NYSE:BABA) Group Holding and Amazon.com (NASDAQ:AMZN).

Tesla, up over 700% in the past 12 months, has become the most valuable auto company in the world by far, despite production that is a fraction of rivals such as Toyota Motor (NYSE:TM), Volkswagen (DE:VOWG_p) and General Motors (NYSE:GM).

Tesla's latest lift came after RBC raised its rating on the stock to "sector perform" from "underperform."

RBC analyst Joseph Spak said in his research note that he previously underestimated Tesla's ability to use its soaring stock price to raise capital to fund the company's expansion.

"We took a fresh look at the growth opportunity, what we got wrong about TSLA's positioning and the valuation and conclude that the stock price itself is likely to be somewhat self-fulfilling to TSLA's growth and strategy," Spak wrote.