For those who follow such things, the “World’s Richest People” list has seen a dramatic shakeup this year. Many of the familiar names (Bezos, Gates, Arnault, Zuckerberg, Buffett, etc) remain in the Top 10, but Tesla’s eccentric CEO Elon Musk has seen his wealth balloon to nearly $150B on the back of the huge rally in Tesla stock to propel him all the way up to #2 overall. With TSLA (finally) set to be formally added to the S&P 500 before markets open on 21 December, what are the prospects for the hotly-debated electric automaker moving forward?

From a fundamental perspective, Tesla (NASDAQ:TSLA) is the quintessential growth stock. In other words, the company has low revenue and profit figures relative to its current price, with traders more focused on the firm’s future prospects and total addressable market. Based on analysts’ estimates for the next twelve months, TSLA sports a P/E ratio of 160 and P/S ratio of 13; by way of comparison, Tesla’s valuation is ~25X higher than the equivalent ratios for General Motors (NYSE:GM), a far more established and profitable automaker, at 6.7 and 0.5 respectively.

Turning to the chart, the only thing more incredible than Tesla’s sky-high valuation ratios is the strength of its current uptrend. Since bottoming near $70 in mid-March, TSLA has surged nearly 800% to trade above $620. The most relevant technical features of the chart are the 50-day exponential moving average, which has consistently provided support over the past nine months, and the bullish pennant formation from September and October. The mid-November breakout from that pattern created a “measured move” price objective near $610: 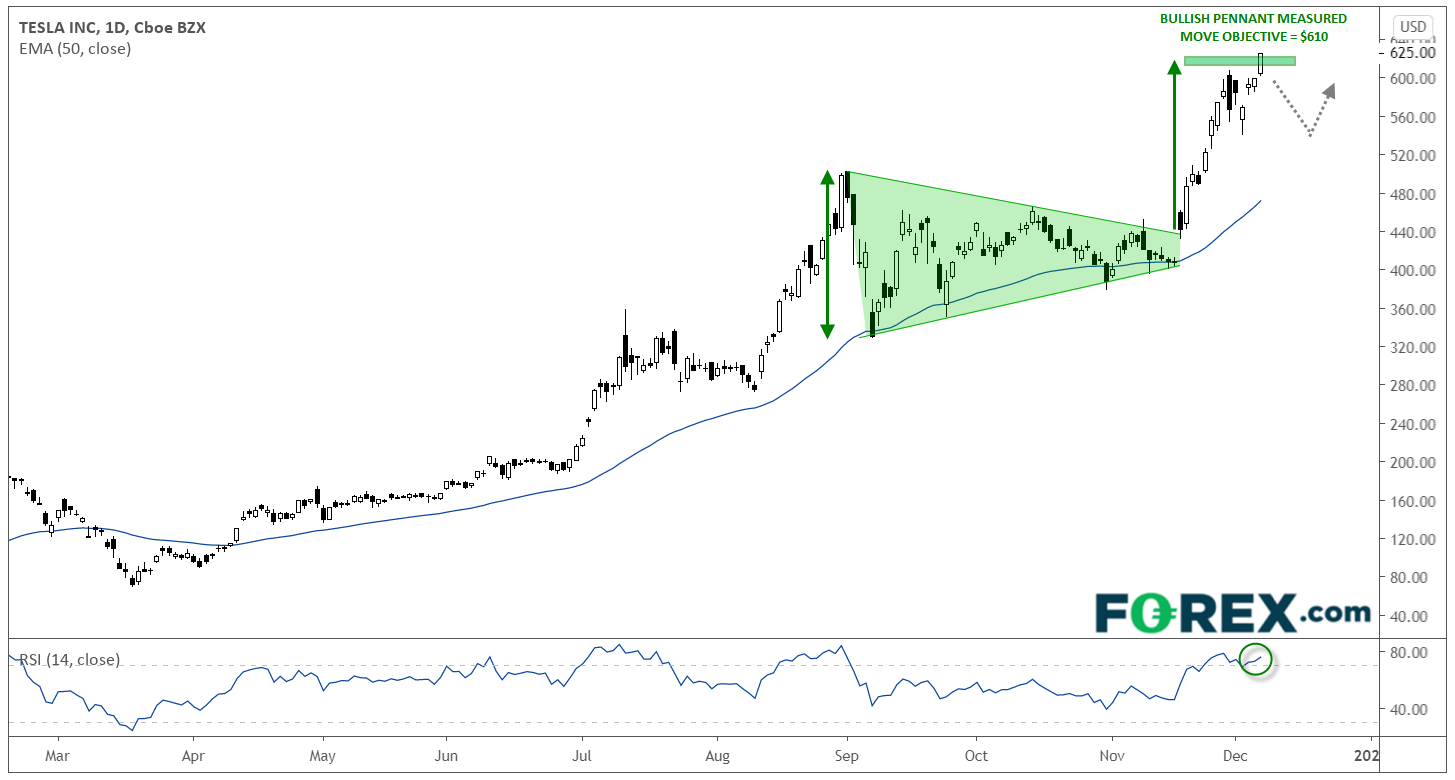 With prices reaching that technical objective this morning and trading well above the 50-day EMA, it wouldn’t be surprising to see the stock pause or pullback into the $500s in the coming days. That said, TSLA remains in a strong uptrend, and with many funds trying to “window dress” their portfolios ahead of end-of-year communications, readers could consider buying on short-term dips as long as the 50-day EMA continues to provide support.

After all, Elon Musk becoming the richest person on the planet seems like an oddly apropos development for the bizarre, unprecedented year we’ve lived through thus far!