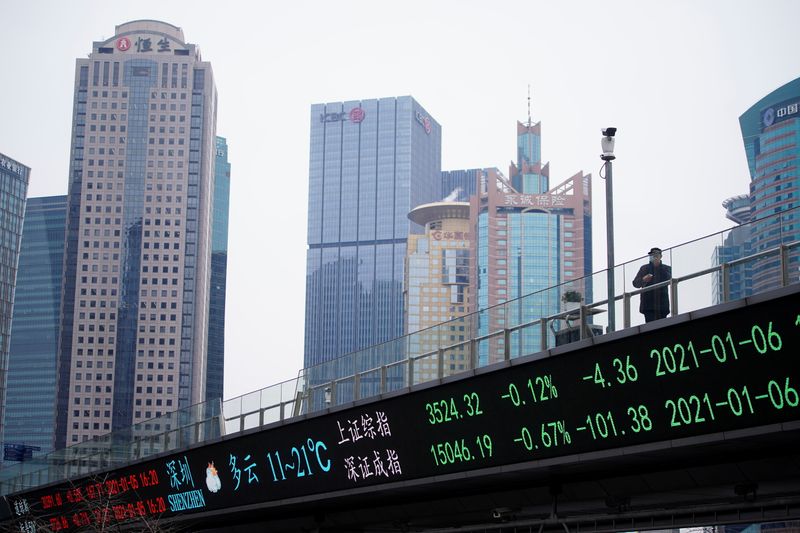 © Reuters. A man wearing a mask, following the coronavirus disease (COVID-19) outbreak, stands on an overpass with an electronic board showing Shanghai and Shenzhen stock indexes, at the Lujiazui financial district in Shanghai

By Alun John and David Henry

(Reuters) – Asian stock markets rose on Tuesday after a record-setting day on Wall Street, while bitcoin paused for breath after an overnight endorsement from Tesla (NASDAQ:TSLA) Inc sent the cryptocurrency up 20%.

However, in a sign that positive sentiment may run out in European trading, eurostoxx futures were down 0.05%, London's FTSE futures fell 0.12%, and E-mini futures for the S&P 500 were flat.

Gains were led by Chinese blue chips which were up 1.67%, while the Hong Kong benchmark rose 0.51% and Korea's rose 0.27%, with chip giants benefiting from the bitcoin excitement.

Iris Pang chief economist for Greater China at ING said Chinese markets' strong performance was a result of investors buying ahead of the Chinese New Year break, anticipating that prices would be higher after the holiday.

Chinese stock exchanges are closed for a week from Thursday.

Tuesday's gains in Asia matched the so-called reflation trades around the world, in which global markets bid up stocks, oil and gold while U.S. Treasury yields held shy of 11-month highs.

"Reflation on the back of U.S. fiscal stimulus and positive vaccine news remains the major theme for markets," strategists at National Australia Bank (OTC:NABZY) wrote.

Expectations have been building that inflation would pick up as governments and central banks continue massive spending and easy money policies until officials are certain that their economies will recover from the coronavirus pandemic.

Wall Street reached all-time closing highs on Monday as the Nasdaq Composite added nearly 1% and the S&P 500 and the Dow Jones Industrial Average gained about 0.75%.

In more volatile cryptocurrency markets, bitcoin passed $47,000 for the first time, a 20% rise, before fluctuating a little below that level.

Tesla Inc said overnight it had invested around $1.5 billion in the virtual currency and expects to accept it as payment for its cars in the future.

Justin d'Anethan, sales manager at digital asset company Diginex, said most of the selling pressure in Asia had been absorbed.

"This morning, after over $1.2 billion of leveraged shorts got liquidated, the usual sellers of crypto will probably think twice before dumping their coins," d'Anethan said.

Oil prices continued to rise on Tuesday to 13-month highs.

"There is a sense that the glut of oil supply is disappearing more rapidly than anybody thought possible," said Phil Flynn, senior analyst at Price Futures Group in Chicago. "There seems to be a paradigm shift in the market."

Spot gold rose 0.37% to $1,837 an ounce, a week high, as expectations of a large U.S. economic stimulus package bolstered its appeal as an inflation hedge.

Such expectations hit the dollar index , which dropped back further on Tuesday after tripping at the end of last week on a weaker-than-expected jobs report. It was last down 0.25% at 90.728.