This market reminds us of the old adage: How do you climb Mount Everest? One step at a time.

That’s how this rally has been during the pandemic. Meandering a path that seems at times insurmountable, other times flat—and sure; at times the oxygen level has felt a bit thin—but over time scaling to heights not seen before.

Futures activity this morning suggests the may take another page out of this week’s playbook by rising a little bit yet still closing at a record. After all, anything higher than yesterday, even a 1 point gain, would be new territory.

The wider story though appears to be that investors may be treading softly ahead of the earnings season that gets into high gear next week. Analysts expect profits from SPX companies to come in a good bit higher than in the first quarter last year. But that’s probably not that high a peak to scale given the impact of the coronavirus on businesses in the first three months of 2020.

Still, if recent patterns hold up, a sizeable chunk of SPX companies may end up beating consensus expectations, perhaps providing the market with a few more footholds in its climb higher. Of course, if expectations aren’t met, the market could find itself on a slippery slope.

There doesn’t seem to be much reason to think that the Friday of a slow week will see much more volume than in trading sessions earlier in the week unless there’s something in the news flow that surprises investors. After all, there can be unexpected gales when you’re high on a mountain.

It’s been interesting to watch the SPX hit record highs this week on lighter-than-average volume.

While it’s always encouraging to see new records, there hasn’t been tons of excitement around the freshly gained territory for the broad index as the gains themselves haven’t been huge.

It looks like the market has support from the continued vaccine rollout, Congressional stimulus, and the Fed’s apparent willingness to keep monetary policy loose for some time. But those are factors that the market has known about and mostly priced in.

So it appears that the default sentiment is bullish, but there hasn’t been a whole lot of newness to propel the market meaningfully higher — aside from the incremental record highs.

Investors also seem to be at a place where they’re not too sure whether to keep plowing money into the reopening trade or whether to keep their guard up a little by holding onto stay-at-home stocks in case the U.S. vaccination effort runs into major unforeseen hurdles.

That indecision has left an opening for what were once Wall Street’s go-to stocks — the mega0cap tech players.

The likes of Apple (NASDAQ:), Microsoft (NASDAQ:), Alphabet (NASDAQ:) and Amazon (NASDAQ:) were the saviors during the height of pandemic uncertainty, helping the market more than rebound from its March 2020 low as investors piled into the relative safety of the large growth companies.

But then they and other growth stocks fell out of favor as inflation expectations boosted longer term treasuries. Now that the is back below 1.7% and investors are unsure of where else to put their money, it seems that the FAANG names are once again resuming a mantle of leadership and the tech-heavy has been playing catch up.

Banks To Report Earnings Next Week

It seems that one other reason trading volumes have been lackluster this week is that investors may be holding off until they see what bank earnings hold.

Banks are in an interesting position at the moment as the yield curve has been steepening and the economy has been getting better. An economic rebound could mean greater loan volume for financial institutions even as rising long-term interest rates mean the banks can earn more money on interest from those loans relative to what they have to pay on interest for short-term deposits.

Along with smaller and regional banks, there are some other names investors might want to pay attention to as they also report earnings next week.

Bed Bath & Beyond (NASDAQ:) could provide a look into demand for home goods as the pandemic eases; plus, it’s also been in the spotlight as part of the so-called Reddit trade. Delta Air Lines (NYSE:), JB Hunt Transport Services (NASDAQ:) and Kansas City Southern (NYSE:) may offer some light on the reopening economy. Rite Aid (NYSE:) could provide more commentary on the vaccine rollout. And as a consumer staples company, PepsiCo (NASDAQ:) tends to be a generally closely watched stock that has its finger on the pulse of the American consumer.

There are also some economic reports out next week that could move the market. The March consumer price index is scheduled for release Tuesday morning, and the March retail sales report is on the calendar for Thursday morning. Data on March housing starts and building permits, along with the preliminary April University of Michigan Consumer Sentiment Index round out the week on Friday. 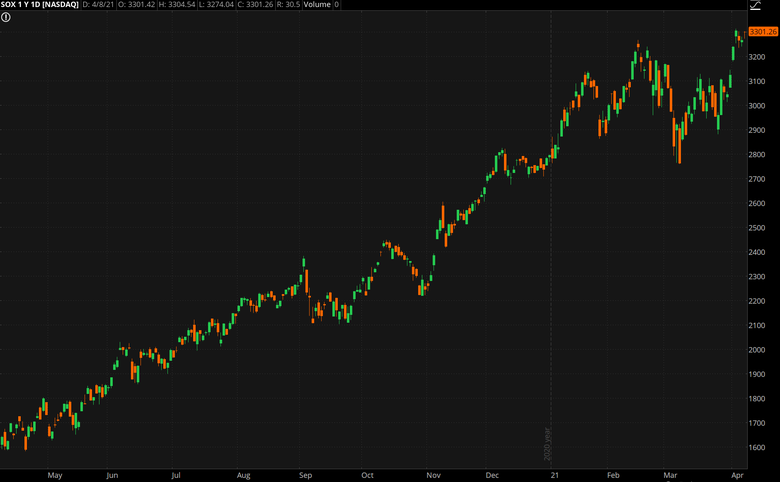 CHART OF THE DAY: OPPORTUNITY FOR CHIPMAKERS: As the ripples from the global chip shortage widen, it’s no surprise to see chip makers gaining ground. The PHLX Semiconductor Sector Index (SOX—candlestick) is up substantially over the past year as demand outstrips supply for semiconductors used in automobiles and home electronics. Data source: Nasdaq. Chart source: The thinkorswim® platform. For illustrative purposes only. Past performance does not guarantee future results.

Pass The Chips: Ripples from the global semiconductor shortage widened on Thursday amid media reports that General Motors (NYSE:) is idling plants or extending shutdowns and production of some of Apple’s MacBooks has been postponed because of a dearth of chips. The shortage has been rippling through the auto industry, which needs semiconductors for infotainment systems, engine management for better fuel economy, and power braking and steering. As demand for autos increases along with the economic recovery, It doesn’t help the automakers that they’re having to compete for chips with the consumer electronics industry, which has seen a boom because of people wanting computers, smart TVs, and gaming systems so they can work, learn and entertain themselves at home.

Inflation In The Making? As carmakers and electronics manufacturers scramble for chips, costs are rising for semiconductors and components used to make them. As demand outstrips supply, it remains unclear how much prices of cars and computers might rise for end consumers as a result, if they rise at all. But it’s this exact scenario of increasing post-pandemic demand coupled with supply lines that can’t keep up that has the market worried about inflation. And when you add in the increases in raw materials that we’re seeing because of current and expected demand, rising prices seem to be in the offing, and not just for products that use microchips. For those taking a more pessimistic view, it doesn’t seem to be a question of if inflation will happen, but one of how much will prices increase and for how long? But as Fed Chair Jerome Powell reiterated Thursday in a speech to the IMF, the central bank thinks upward pressure on prices that may be passed on to consumers “will be temporary.”

Supply And Demand: While the chips shortage is a headache for consumer electronics companies and automakers, it’s an opportunity for chip makers. The is near record highs, as it seems like the only answer in the short term lies in suppliers slowly catching up with orders. Of course demand may fall over time, but that doesn’t look like the case any time soon, if the online clamoring for gaming consoles is any indicator. “The ongoing global semiconductor shortage means the difficulty of buying a PlayStation 5, Xbox Series X, or high-end GPU from companies like Nvidia (NASDAQ:) or Advanced Micro Devices (NASDAQ:) could go on for months — if not for the rest of 2021,” according to a Wednesday article from The Verge, a technology news website. Over the longer term, more chip manufacturing capacity will come online. Intel (NASDAQ:) and Taiwan Semiconductor Manufacturing (NYSE:) are planning facilities in Arizona, but they won’t be up and running until 2024.