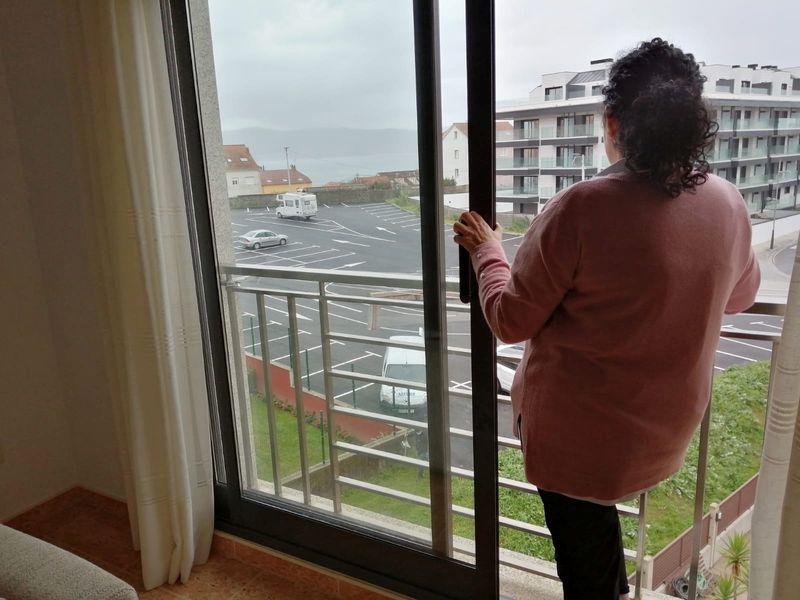 © Reuters. Airbnb host Perla Requejo stands at the window of the property that she rents to holidaymakers on Airbnb in Sanxenxo 2/4

MADRID (Reuters) – During a surreal summer in Spain, Perla Requejo saw so much demand for the Atlantic coastal apartment she had been unable to rent on Airbnb during lockdown that she listed another and raised her daily rate.

While bookings and rental rates have plummeted in Barcelona and Madrid, two of Airbnb's biggest markets globally, rural or coastal areas and some smaller cities are showing new life after Spain imposed some of the strictest coronavirus restrictions.

With people keen to avoid crowded city centres, data suggests guests will now pay more to stay in such places.

"In the middle of the pandemic … I started to receive requests for information on the first house. Everyone was just waiting to see if they could travel in summer," said Requejo.

The resilience of rentals away from big cities has helped Airbnb, which made 40% of its revenue in Europe last year, to weather the crisis better than many expected.

As the company gears up for one of Silicon Valley's most eagerly anticipated stock market listings on Thursday, a central question for potential investors is whether this will support future growth.

Around two-thirds of people who rented out flats or houses to tourists in Spain have moved them onto the residential market, a study by property portal Fotocasa found.

But in Requejo's cool, hilly Galicia region of northern Spain, there are now 20% more registered holiday lets than in January, a local tourist rental association says, and the bet is showing signs of paying off.

The average price of a night in the local towns of Ferrol and Ourense rose 28% and 9% respectively in the third quarter, according to AirDNA, which analyses data on vacation rentals.

Rounding the coast towards France, surfers' paradise San Sebastian has seen daily rates soar 76%, while in Barcelona, on the eastern Costa Brava, prices fell by an average of 18%.

Airbnb says 32% of Spaniards it surveyed at the end of September took advantage of not being tied to offices and extended trips to work extra days remotely.

Requejo says some of her guests worked remotely during their stays, and fellow Galician host Margarita Orduna was overwhelmed by requests for her property in Ferrol, some from people who wanted it for all of August.

"There was more demand than in previous years," said Orduna.

Requejo, who has not calculated how much lower her total income will be this year, says, "We cannot recover those reservations we had in April, May and June."

But with the pick-up in summer, "even though everything was very difficult, we managed to save the season".

Some in Europe have made Airbnb their livelihood, and are holding out for a tourism turnaround.

Sweeping restrictions in March caught Airbnb host Roberto Cubas as he was saving to buy a third apartment to add to his luxuriously-furnished portfolio in Valencia, eastern Spain.

"It was terrifying. I had to do yoga twice a day and meditate a lot to save myself from going mad," said Cubas, who nevertheless intends to ride out the ongoing slump.

"People are desperate to travel because they have been stuck at home, so they will get on a plane the moment governments allow it," Cubas said.

Vacation rental website HomeToGo found that 63% of Spaniards were planning to book holiday accommodation in the next year.

Although most owners who moved to the residential market have done so indefinitely, around 15% have taken a tenant for a fixed term and plan to start welcoming holidaymakers again when the situation improves, Fotocasa says.

Cubas thinks Airbnb hosts who stuck it out will be rewarded.

"When everything starts moving again there will be fewer of us sharing the pie," he said.