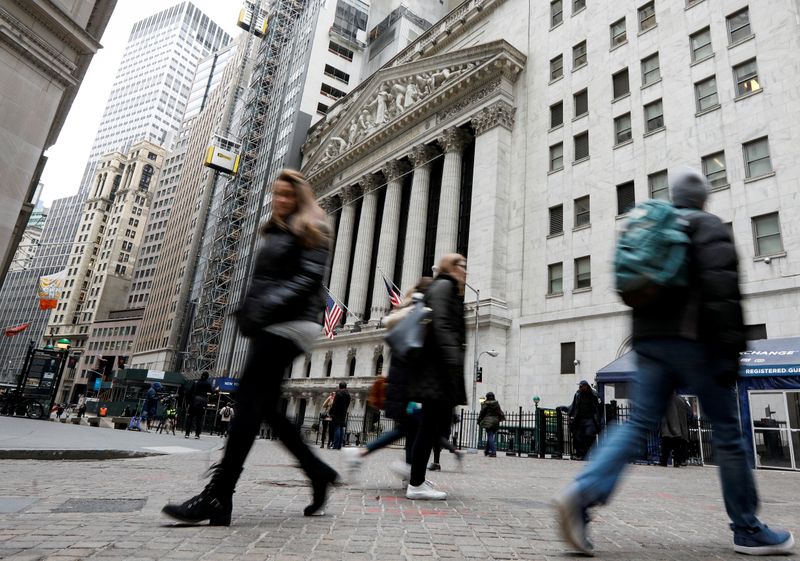 © Reuters. People walk on Wall St. in front of the NYSE in New York

By Nivedita Balu and Anirban Sen

(Reuters) – Blank-check firms – popularly known as SPACs – emerged as the most popular investment vehicles and the primary driving force behind a record year for initial public offerings (IPOs) in 2020, even as overall dealmaking activity tumbled to a three-year low.

SPACs are shell companies that raise funds in an IPO with the aim of buying a private company, with the acquired company becoming public after the merger.

Once confined to the backwaters of Wall Street dealmaking, a SPAC, or a special purpose acquisition company, accounted for nearly half of the overall amount raised through new listings as investors mostly bet on new tech stocks after the Federal Reserve shored up the economy with a stimulus package in May.

The next 18 months could be even better for companies looking to go public through blank-check deals, according to bankers who have worked on SPAC deals this year, even as high-profile investors such as Bill Ackman and Chamath Palihapitiya doubled down on the SPAC gold rush.

The average Day-1 pops for new listings also touched a record, with 2020 accounting for at least 14 of the 30 IPOs with the biggest first-day-close gains of the last 15 years, according to data from Dealogic, which has tracked IPO data since 1995.

Nineteen IPOs saw shares more than double in value on their first day of trading, the most since 2014, when there were six.

The breakneck pace for IPOs has evoked memories of the dot-com bubble at the turn of the century, with concerns the exuberance could lead to frothy valuations.

Companies have raised about $167.63 billion in the United States in 2020, according to Dealogic data. In comparison, companies raised $108 billion in 1999, which previously held the record for capital raised through new issues.

At least nine companies raised over $1 billion in their IPOs this year, with several Silicon Valley unicorns including Airbnb, DoorDash, Palantir Technologies Inc and Snowflake Inc having blockbuster debuts.