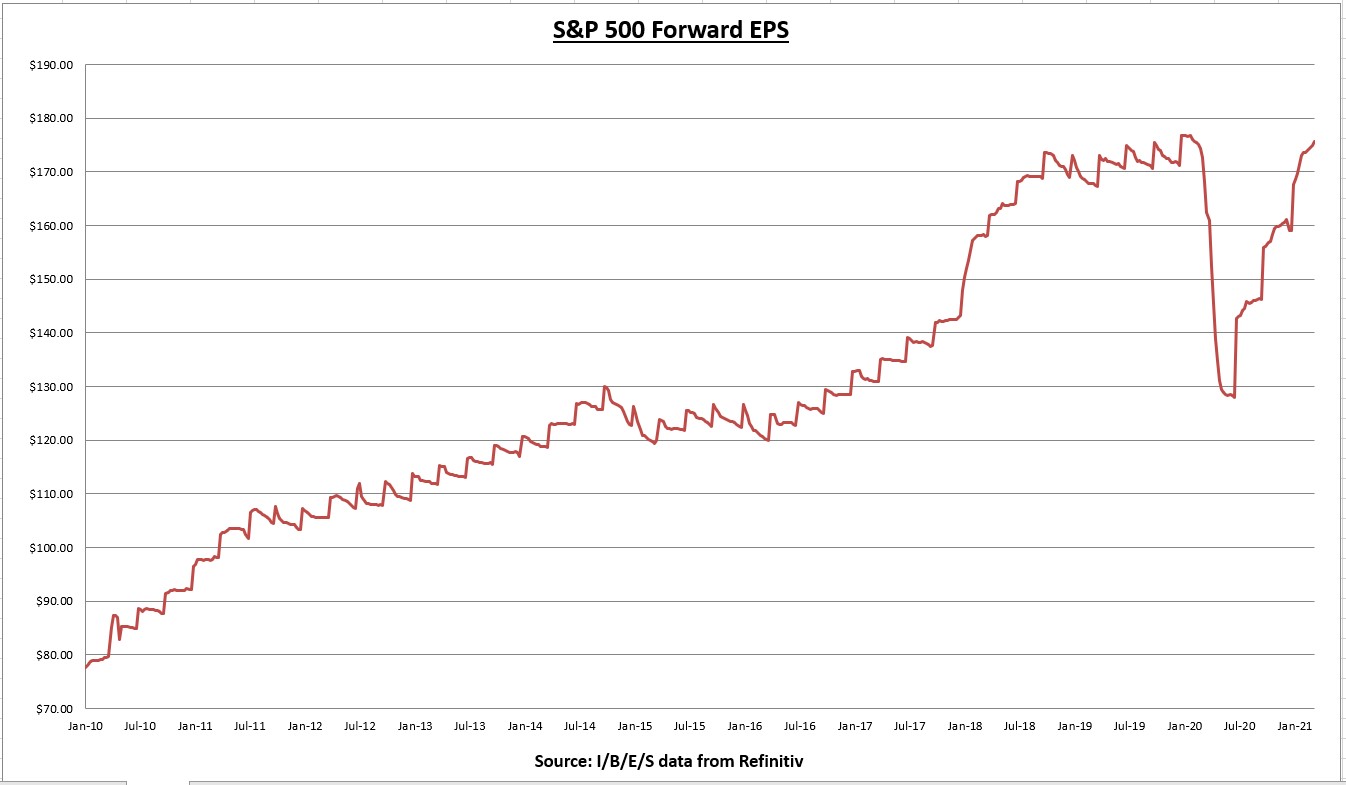 The forward EPS is less than 1% away from all-time highs and I expect a substantial increase when we roll into the new quarter.

The price to earnings (PE) ratio declined to 22.3.

The earnings yield on the S&P 500 is now 4.49%, while the 10-year Treasury bond rate increased for the 8th straight week in a row, reaching 1.73% as of this writing. The valuation gap was narrowing, with the equity risk premium falling to 2.76%, but still favoring stocks convincingly.

Industrial production declined -2.2% in February, attributed mainly to the severe weather that impacted the south central region, and the global semiconductor shortage. Industrial production has increased 15% off the April 2020 lows, but has only recovered about 74% of the COVID decline (down -4.3% from this time last year).

The Conference Board’s Composite Index of Leading Economic Indicators (LEI) index increased 0.2% in February, but still down 1.4% on an annual basis. Key points (emphasis mine):

“Indeed, the acceleration of the vaccination campaign and a new round of large fiscal supports are not yet fully reflected in the LEI. With those developments, The Conference Board now expects the pace of growth to improve even further this year, with the U.S. economy expanding by 5.5 percent in 2021.”

“Despite widespread improvements among the leading indicators, some measures—including weekly hours in manufacturing, permits for residential housing, and consumers’ outlook for business and economic conditions—showed signs of weakness.

"Bad weather and assorted supply-chain disruptions may have impacted these particular leading indicators in February, and the effects may prove transitory.”

The stock gained 325% last year—clearly we can’t expect that to continue forever. I’ll be looking to add if the stock drops into the $155-$165 range. I like the company’s long-term potential.

Strong growth, strong balance sheet, in an important industry. A lot of competition within the cybersecurity space though. We’ll see how it plays out. I’m long Crowdstrike, Zscaler (NASDAQ:ZS), and Fortinet (NASDAQ:FTNT).

Chart of the week

This could certainly change by year's end, but it proves the point that the worst investment strategy in the world is to pile into everything that has gone up the most. Stay diversified and stay disciplined!

The Federal Reserve increased its forecast for economic growth this year (+6.5% real GDP, the highest since 1984) while maintaining its pledge of accommodative monetary policy for as long as possible.

I have a feeling inflation will test the Fed’s patience later this year, but the question will be if it's temporary or a trend. The Fed believes it to be transitory, but as I pointed out before, the Fed also believed the yield curve inversion of 2018 wasn’t a big deal… until it was.

For now its all about earnings growth (currently estimated to grow 25% this year), an economy that is poised for record growth, and interest rates that are still low enough to provide little competition to stocks. Yes, rates have tripled in the last six months.

But they are going up for the right reasons. And the latest CPI report shows 1.7% annual increase, which I expect to increase in the months to come. So rates are basically 0% net of inflation. As I’ve said before, we shouldn’t have negative real rates in this environment.

With a 4.5% earnings yield and 1.5% dividend yield, I don’t see rates causing a problem for the market as a whole (sure certain areas of the market will suffer, particularly the ones with the highest valuations) even if the 10-year Treasury rate rose to 3% (my guess is rates will rise to the 2% – 2.5% range), as long as the Fed is able to remain accommodative. Time will tell.

This week there are five S&P 500 companies reporting earnings. I’ll be paying close attention to Adobe (NASDAQ:ADBE) on Tuesday. For economic data we’ll have New Home sales on Tuesday, the final reading on Q4 GDP on Thursday, and core PCE (the Fed’s preferred measure of inflation) on Friday.

Along with plenty of Fed speak throughout the week. Another busy one!