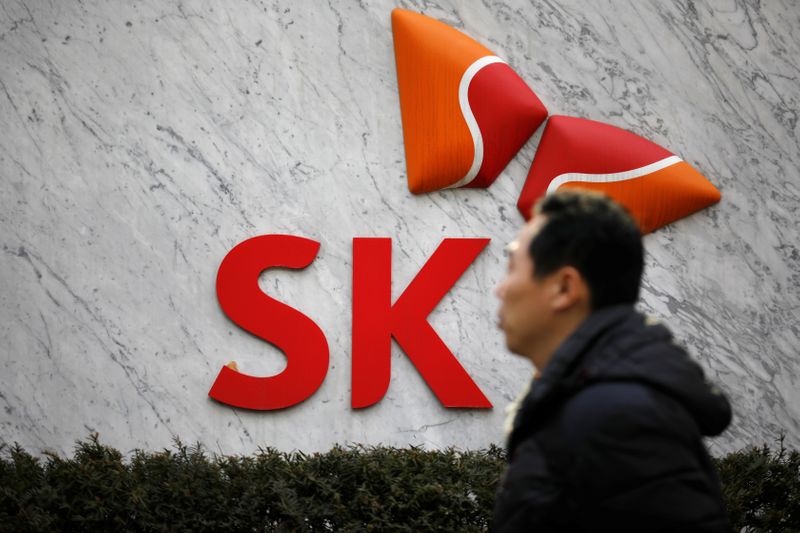 © Reuters. The logo of SK Innovation is seen in front of its headquarters in Seoul

By Heekyong Yang and Joyce Lee

SEOUL (Reuters) – Shares of South Korea’s SK Innovation and LG Chem jumped on Monday after the battery makers agreed on a 2 trillion won ($1.8 billion) dispute settlement over EV battery technology, which analysts said freed them up to stay on top of battery developments from clients like Volkswagen (DE:).

LG Energy Solution, a wholly owned subsidiary of LG Chem, and SK Innovation also agreed on Sunday to drop all litigation in the United States and South Korea and not to sue each other for 10 years, after the core dispute had threatened the EV plans of Ford Motor (NYSE:) Co and Volkswagen AG (OTC:).

“This agreement has resolved uncertainties about the growth of the battery business and our pursuit of the U.S. market,” SK Innovation CEO Kim Jun said in a message to employees seen by Reuters. “It will enable us to accelerate the construction of the Georgia, U.S. plant and actively promote additional investment and cooperation in line with the development of the U.S. and global electric vehicle (EV) industry.”

Ford said in a statement on Sunday that it was pleased the battery makers had settled their differences, and that the agreement allowed Ford to focus on delivering EVs for retail and fleet customers.

“The market sees the deal in favour of SK as the settlement amount was less than expected; some had even said it could cost up to 7 trillion won,” said Cho Hyun-ryul, analyst at Samsung (KS:) Securities.

“The agreement is positive for both companies’ stock prices, by resolving the lawsuit issue for the future,” Cho added. “For SK, the value of its battery business had been reflected less in its stock price versus competitors. However, this deal with LG could serve as leverage.”

Shares in SK Innovation had fallen 19.7% since February, when U.S. International Trade Commission sided with LG Chem on the trade secrets case, while LG Chem shares had fallen 15.4%.

However, analysts said the companies’ lawsuit-free future partly depended on how they responded to Volkswagen’s decision last month to move the bulk of its cars to a new unified prismatic battery and away from the pouch-style manufactured by LG and SK – although Volkswagen’s shift doesn’t mean other automakers will follow.

“Especially for SK, which is highly dependent on pouch-style batteries, the key is how it will win orders in the future. Although there are no public numbers, SK is known to be quite dependent on Volkswagen for the battery business,” said Kang Dong-jin, analyst at Hyundai Motor Securities.