Agricultural commodities products and lithium producer Sociedad Quimica y Minera de Chile (NYSE:SQM)) stock has been on a powerful uptrend fueled by momentum in lithium suppliers. The electric vehicle (EV) revolution has fueled the worldwide hunger for battery grade lithium to power them. Europe’s largest automaker Volkswagen (DE:VOWG_p) (OTC:VWAGY)) (with over 19 million cars produced in 2019) plans to have all its vehicle models be electric by 2030.

General Motors (NYSE:GM) has targeted 2035 for an all EV vehicle portfolio. The world’s largest lithium supplier Albemarle (NYSE:ALB)) is already sold out for 2021. This has drove speculation into the junior miners with high profile lithium projects like Lithium Americas (NYSE:LAC) and Piedmont Lithium (NASDAQ:PLL) that aren’t even scheduled to generate any supply until at least 2022. On the other hand, SQM is already producing lithium as the world’s second largest producer and has beefed up expansion plans to accommodate the surging demand. Risk-tolerant investors seeking to gain exposure in the growing demand for lithium can monitor SQM shares for opportunistic pullback levels.

SQM is a Chilean agrichemical company that generates nearly half its revenues from high-quality rock and brine lithium production. Lithium can be rock mined or brined. Rock mining for spodumene contains up to 7.7% lithium by weight compared to 0.16% lithium by weight for brine. Chile has the world’s largest brine deposits in the Salar de Atacama, generated by water seepage from the subsoil of the Andes Mountains. SQM will invest $1.9 billion in a four-year investment plan that includes boosting lithium production. SQM expects to expand lithium carbonate capacity to 120,000 tonnes from 70,000 tonnes and lithium hydroxide capacity to reach 21,500 tonnes by the end of 2021. Current production rate is 75,000 tonnes. The Company plans to plans to reach 180,000 tonnes of lithium carbonate and 30 metrics tons of lithium hydroxide capacity by 2023. The Mount Holland lithium project in Australia final investment decision will be made by end of Q1 2021.

It’s important to keep in mind that SQM doesn’t actually own the land or natural resources. This is often the case with miners, they sign a contract with the owner(s) to excavate the land. The Chilean government through CORFO, owns the Salar de Atacama and all the natural resources of the country. SQM signed a deal good until 2030 for lithium extraction rights. Albermarle also has deals in place. However, the country has undergone a political shift that is leaning towards rewriting the Pinochet era constitution. The countries natural resource clauses are hard coded into the constitution and the new constitution could have an impact from opening up excavation rights for lithium to more companies to nationalizing the production. The latter seems absurd until realizing that lithium production was previously nationalized before Pinochet took over. While China controls 40% of the world’s lithium projects, Chile has the world’s largest reserves of brine. The emergence of lithium demand bolstered that the global EV awaking could elevate it’s emergence as a national security risk. Nationalization would be the ultimate blow not just for lithium, but to EVs since Chile, as the world’s largest copper producer, produces nearly a quarter of the world’s copper. Nickel and cobalt make up 73% of an EV battery and lithium 11%. This is why Chile is a major player in the progress of the EV revolution. The political risk is a wildcard that can’t be ignored.

On Dec. 22, 2020, SQM signed a long-term deal with LG Energy to supply up to 55,000 metric tons of lithium products from 2021 to 2029. LG Energy is a division of South Korean LG Chemical, which supplies EV batteries to automakers including General Motors and Tesla (NASDAQ:TSLA). LG Chemicals also plans to publicly list its energy division that manufactures lithium batteries under the name LG Energy Solutions. 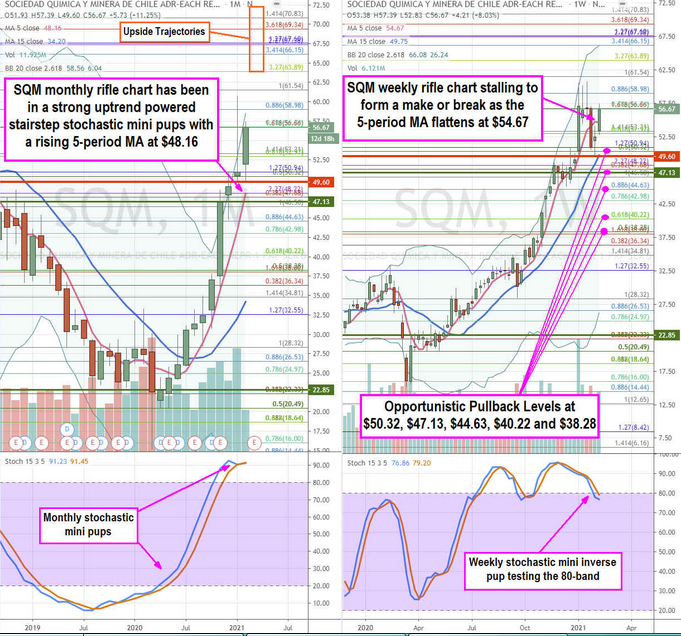 We use the rifle charts on the monthly and weekly charts to provide a wider time frame price analysis for shares of SQM. The monthly rifle chart has been trending with a stochastic mini pup with a rising 5-period moving average (MA) at the $48.22 Fibonacci (fib) level. The monthly upper Bollinger Bands (BBs) sit at $58.55.

The weekly rifle chart has a pup breakout and a stochastic mini pup with rising 5-period MA support at the $44.86 fib. The weekly upper BBs sit near the $66.15 fib. The monthly shooting star could form a monthly market structure high (MSH) trigger under $49.60.

The daily formed a market structure low (MSL) buy trigger above $47.13. The weekly rifle chart uptrend has stalled out as the weekly 5-period MA is flat at $54.67 with a rising 15-period MA at $49.75. The weekly stochastic peaked and formed a mini inverse pup testing the 80-band. This make or break can result in the next leg higher or a reversion pullback with a potential for a full stochastic oscillation down.