Special purpose acquisition company (SPAC) Soaring Eagle Acquisition (NASDAQ:SRNGU) stock has no news, volume, or much movement for now. It’s very much like the famous quote describing the iconic syndicated Seinfeld show being described as, “a show about nothing”. For now, Soaring Eagle is a stock about nothing. However, a closer look at the management should provide a better context in the caliber and prowess of the current team’s ability to find another explosive reverse merger. The SPAC boom and mostly bust cycles have burned many investors who overpaid for and/or overstayed in their positions. Shares have pulled back since the IPO highs near $11.29 back down closed to the $10 offering and floor price. This enables high risk-tolerant investors opportunistic pullbacks to consider taking a purely speculative position.

A Show About Nothing

According to the FORM 8-K filing on Mar. 4, 2021, the Company generated a total of $1.725 billion comprised of $1.69 billion from the IPO and $25.875 million from proceeds of the sale of Private Placement Warrants with conversion prices of $11.50 per-share. The Feb. 26, 2021, IPO consisted of 172.5 million units comprised of 150 million units and 22.5 million units as a result of underwriters exercise of over-allotment option in full. Each unit is comprised of 1 Class A share and one-fifth of 1 redeemable warrant entitling the holder to purchase shares at $11.50. Simultaneously with the IPO, the Company completed a Private Placement of 19.25 million warrants to Eagle Equity Partners III, LLC, at the purchase price of $1.50 with $11.50 conversion price for additional proceeds of $25.875 million. The SPAC has until Feb. 26, 2023 or Aug. 26, 2023 to find a reverse merger (Business Combination) acquisition or else close operations and redeem 100% of outstanding public shares. In a nutshell, the SPAC has 2-years to find the next acquisition or else redeem all outstanding shares at $10. Theoretically, investors get back $10 per-share if no acquisitions are made in a 2 year period. Therefore, the downside floor is basically $10 per-share. The closer you enter towards the $10 mark, the less your risk. 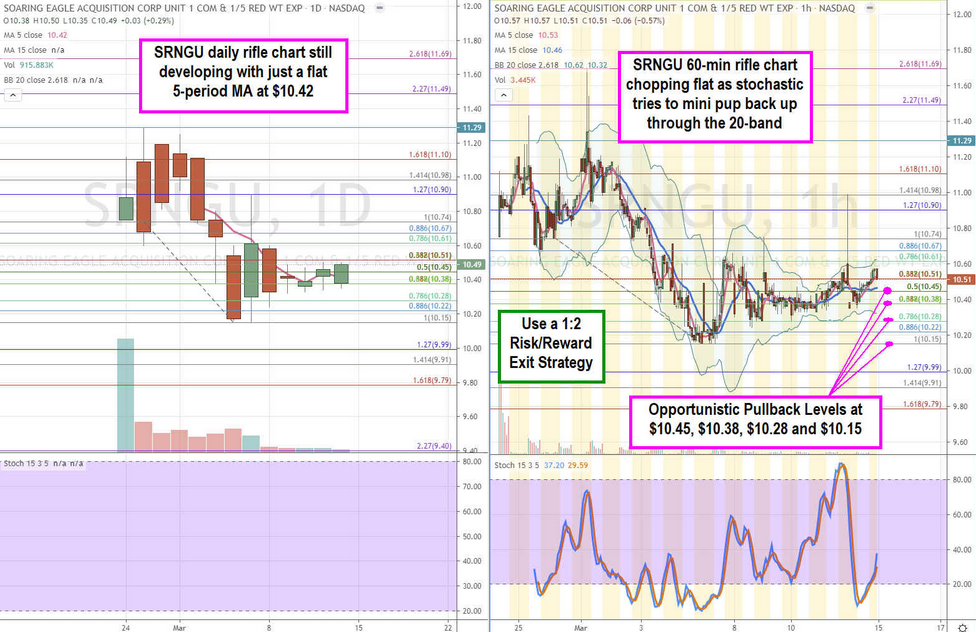 As previously mentioned, management has had a very successful track record with its last two reverse mergers that averaged eight months to just over a year to complete. The key is getting in as close to the ground floor $10 price range. Any speculation of a reverse merger target should bump up the shares until the official announcement. At this point, an initial sell-the-news reaction is possible and then a rise heading into the shareholder vote to approve the business combination. Prices usually peak just before or into the vote and then collapse for three to eight days under the new symbol. Therefore, it’s important to be nimble in exiting the shares into buyers and be completely out before the business combination as dilution sets in upon the symbol change as evidenced by numerous companies like ChargePoint Holdings (NYSE:CHPT), Canoo (NASDAQ:GOEV), Fusion Fuel Green (NASDAQ:HTOO) and XL Fleet (NYSE:XL) just to name a few.

Opportunistic pullback levels under $10.51 can be taken at $10.45 fib, $10.38 fib, $10.28 fib, and $10.15 fib. The lower the price, the smaller the risk taken. As for selling price levels, its contingent on the actual underlying company under reverse merger, which is the wildcard. As a rule of thumb, consider taking profits incrementally at a 2-to-1 reward to risk ratio. For example, if you average in at $10.40, then take some profits at $11.20 which is 2X the $0.40 risk on the position and raise trail stops to ½ the remaining risk.