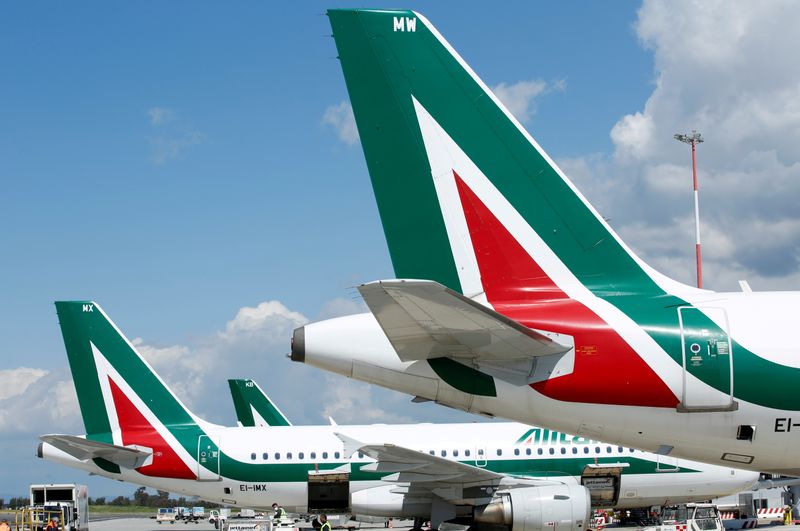 © Reuters. FILE PHOTO: Alitalia planes are seen on the tarmac at Fiumicino International Airport as talks between Italy and the European Commission over the revamp of Alitalia are due to enter a key phase, in Rome, Italy, April 15, 2021. REUTERS/Remo Casilli

ROME (Reuters) – Ryanair will appeal against funds made available to the government-owned Italian airline that will replace Alitalia as it considers them illegal state support, the chief executive of the Irish carrier said on Saturday.

“As soon as this money will be injected in the newco we will take the (due) steps,” CEO Eddie Wilson told Italian daily la Repubblica in an interview.

“We are waiting to see, but it is clear that it is illegal aid and we will defend our interest by appealing against this umpteenth loan,” he added.

Italy is close to a deal with the European Commission to launch Italia Trasporto Aereo (ITA), which was initially expected to start flying again in April.

Under the relaunch, the government plans to inject 3 billion euros ($3.65 billion) into ITA, which would take over the assets of the old Alitalia.

“I have the impression that there’s nothing new, ITA will just be the extension of Alitalia… with the same problems seen for decades, money being drained from public resources into an airline that today, like yesterday, will lose money,” Wilson said.

Last week Ryanair urged the EU to require ITA to bid competitively for Alitalia’s airport slots. Ryanair has made no secret of its interest in picking up Alitalia slots.

The European Union competition watchdog is reviewing past and present Italian state aid to Alitalia, with a decision expected in coming weeks.

Under EU state aid rules, there needs to be economic discontinuity between ITA and Alitalia for Brussels to allow Rome to inject the funds into the new carrier.