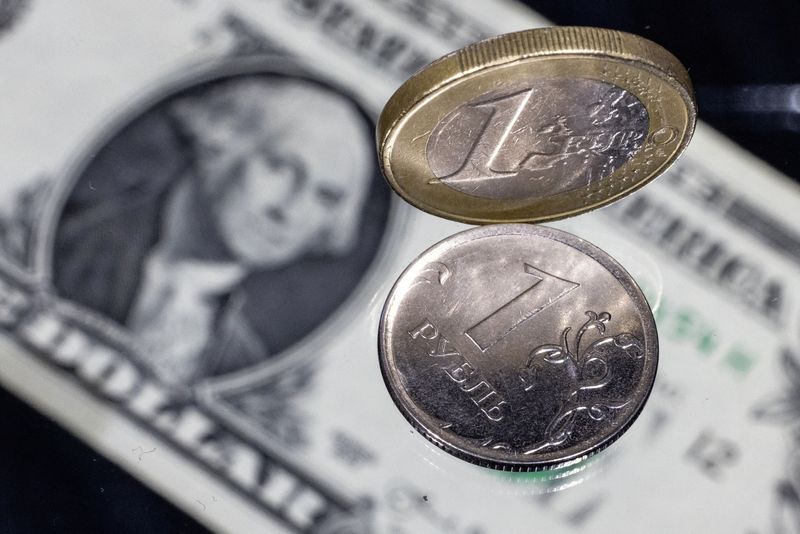 © Reuters. FILE PHOTO: Coins of one Russian rouble and one Euro are seen next to a U.S. one dollar banknote in this picture illustration taken April 6, 2022. REUTERS/Maxim Shemetov/Illusrtration

(Reuters) – The Russian rouble weakened against the dollar on Wednesday but steadied not far from a five-year high against the euro, after losing the support of some capital controls and as sovereign default risk again became a prominent issue.

The rouble has become the world’s best-performing currency this year despite a full-scale economic crisis, artificially supported by controls that Russia imposed in late February to shield its financial sector after it sent tens of thousands of troops into Ukraine.

The rouble has pared some gains since the central bank on Monday raised the ceiling for cross-border transactions, allowing Russian residents and non-residents from friendly states to channel foreign currency abroad at an amount equivalent to up to $50,000 a month. The previous limit was $10,000.

Export-focused companies are still obliged to convert 80% of their revenues, because the central bank cannot itself intervene after the West froze about half of its gold and foreign exchange reserves.

Promsvyazbank analysts said they expected the rouble to consolidate in the range of 63 to 64.5 against the greenback on Wednesday.

Attention will be on Finance Minister Anton Siluanov’s speech at a forum on Wednesday, after a U.S. administration official said Washington was considering blocking Russia’s ability to pay its U.S. bondholders by allowing a key waiver to expire next week. That could push Moscow closer to the brink of default.

Veles Capital analysts said the focus on Wednesday could be on dividend stories. Shares in mobile operator MTS jumped around 20% after the company’s board recommended a dividend of 33.85 roubles ($0.5314) per share late on Tuesday.