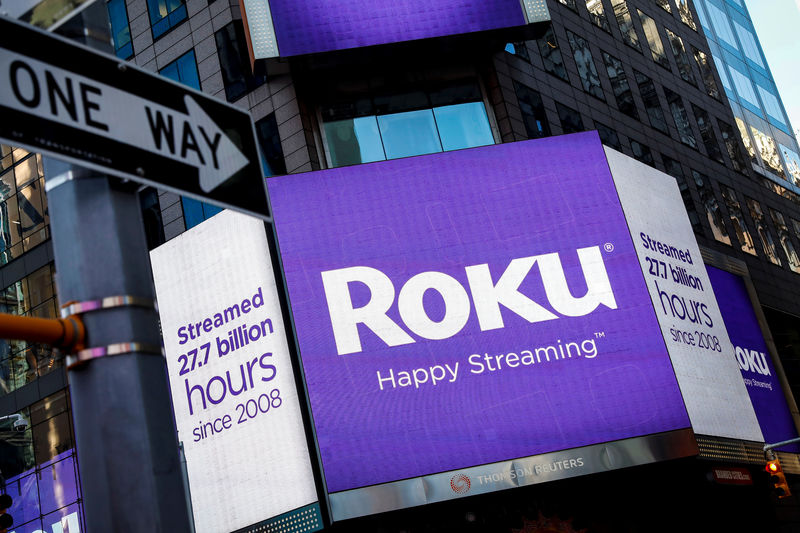 Investing.com — Roku (NASDAQ:ROKU) rose 4% after getting a Street-high price target from Wells Fargo (NYSE:WFC), ahead of a potential acquisition of Quibi.

The firm boosted its price target on the streaming provider to $414 from $275 as we keep streaming.

Shares hit a record last month, after more than doubling over the year. Wells Fargo is seeing opportunity in AVOD: advertising-based video on demand, in which ad revenue is used to offset production and hosting costs.

“Despite a strong rally in Roku we think there is a big runway for ROKU’s AVOD-driven ARPU in 2021+," Wells Fargo analyst Steven Cahall said in a note. "Streaming behaviors for the 2015-2019 period were largely driven by content on subscription video on demand (e.g. NFLX, Amazon (NASDAQ:AMZN) Prime, Disney+) and YouTube, whereas 2020 and beyond suggests a big push into monetizable AVOD.”

Quibi was the biggest bust of the streaming boom. But it has something Roku wants — more than 100 original programs.

Roku is in talks with the failed service Quibi, which announced that it was closing six months after a much-hyped introduction, The New York Times reported, citing a person familiar. The deal is apparently close to completion. Quibi was created by film producer Jeffrey Katzenberg.

Yesterday, Roku started streaming Discovery (NASDAQ:DISCA) Plus alongside Amazon's Fire TV, The Verge reported. Discovery Plus will include shows spun off from Discovery channel stalwarts, like 90 Day Fiancé, a new travel and food series from Bobby Flay and Giada de Laurentiis of the Food Network and and a new series from Magnolia Network’s Chip and Joanna Gaines, hosts of the Fixer Upper home repair series.

On the other side of the table, Netflix (NASDAQ:NFLX) fell slightly after Rosenblatt said it sees churn risk as The Office moves to NBC's Peacock and prices rise.