For the first time in five weeks, investors face a Monday lacking any fresh vaccine developments.

Without that—at least not yet—the market may have to find other reasons to justify rallying. So far it hasn’t. Stocks are in the red thanks in part to another rough weekend of rising virus caseloads across much of the country. Risk aversion appears to be back for the moment as bonds and volatility climb (see more below).

Aside from the sad news about COVID-19 and growing fears of shutdowns hurting the economy, it feels kind of like old home week. China trade was recently back in the news, and now Brexit and a possible U.S. government shutdown are potentially on the agenda. If you didn’t know any better, you might think it was 2019 all over again.

Brexit talks are apparently making some progress, Bloomberg reported Sunday. The U.K. will leave the European Union on Dec. 31—with or without an agreement. The latest debate is over fishing rights, of all things. Both the European and U.K. parliaments need to ratify any accord, and a “no-agreement” Brexit wouldn’t necessarily be the most bullish way to start the new year.

Neither would a U.S. government shutdown. Congress has until Dec. 11 to try and avert that, so just four days. That’s getting wrapped together now with stimulus talks, which are likely to be a big focus this week.

With so much on edge, volatility began a comeback overnight. The Cboe Volatility Index (VIX) popped above 22 after flirting with 20 last week. Risk-off also looked evident in the bond market where the 10-year yield edged down a couple of basis points.

You might assume mid-December is a slow time for earnings, but that doesn’t mean there’s nothing worth checking this week.

ORCL, in particular, may be worth a close look. It’s not a sexy company, just reliable. How it performs can provide clues into cloud business demand, even if ORCL’s business isn’t quite up there with some of the more high-flying companies it competes against. The other thing to remember about ORCL is that they’re one of those well-established multinational companies that can give a great indication not just about what’s going on in the U.S. but worldwide. So consider listening to its call.

Two other things to monitor this week are closely related: The U.S. dollar and interest rates. The dollar index is at its lowest point since the spring of 2018, while the 10-year yield approached 1% on Friday.

Both tell the story of economies gaining steam. The soft dollar (see chart below) partly reflects hope for strength in overseas economies (the euro is now at 31-month highs vs. the dollar), while higher rates suggest that hope is growing for Congress to provide stimulus. Of course, the dollar softness also could reflect stimulus hopes, too, because if Congress acts it means more currency being thrown at the economy.

The question is whether that psychological 1% level for the 10-year yield spooks anyone trading stocks. It might for a day or two, but that’s not necessarily something to worry about. Remember, the 10-year yield was trading near 2% when everything went haywire last winter, and the economy had been rolling along pretty nicely.

As longer-term rates rise, the spread between the longer end and shorter end of the yield curve continues to stretch. By the end of the day Friday, the 2-year/10-year spread hit a 2020 high of 83 basis points. You might expect financials to get a nice lift out of that news, and they did rise more than 1% Friday. That put them near the top of the sector leaderboard, but way behind energy’s 5% gains.

Another tracker to follow is VIX, which keeps nearing 20 but also keeps having trouble dipping below it. Maybe this is finally going to be the week when it finds a way to get down below 20 and stay there for a while, something that hasn’t happened in 10 months. We’ve come a long way from those 80 readings back in March, so the market feels like a much less turbulent place. 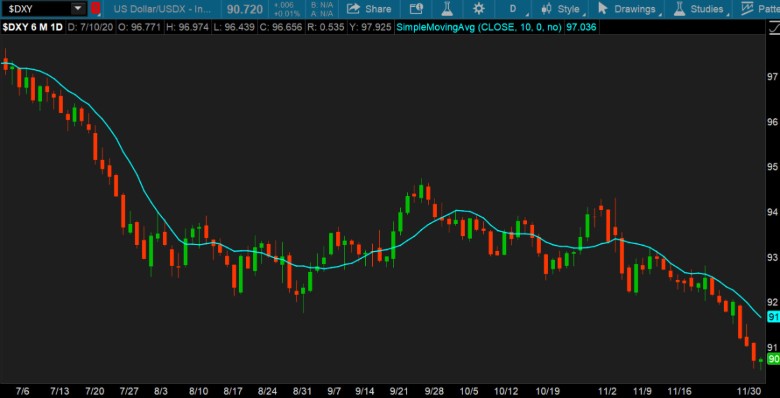 CHART OF THE DAY: SHADES OF 2018. The U.S. Dollar Index continues to weaken to levels last seen in April 2018. It’s trading below its 10-day simple moving average (blue line) which is trending lower. If you look back to 2018, $DXY went as low as 89, which could potentially be the next support level. Data source: ICE (NYSE:ICE) Data Services. Chart source: The thinkorswim® platform from TD Ameritrade (NASDAQ:AMTD). For illustrative purposes only. Past performance does not guarantee future results.

A Stocking Full of Fresh IPOs: All the focus on stimulus and vaccines has overshadowed what an amazing year we’ve had for initial public offerings (IPOs). The number of U.S. IPOs spiked from last year despite COVID-19, Barron’s said. The total may approach 200, which would even top the tally from 2018—an incredibly strong IPO year. This year has seen the most money raised for U.S. IPOs since 2014.

Potentially adding to that list as soon as later this week are anticipated IPOs of Doordash (NYSE:DASH) and Airbnb Inc (NASDAQ:ABNB). Airbnb plans to target a range of around $39 billion to $42 billion, while DoorDash will seek a valuation of around $25 billion to $28 billion, The Wall Street Journal reported recently.

It also looks like 2021 could shape up as a big year for new offerings, so stay on your toes and remember that it helps to keep a cautious outlook on IPOs in general. Their stock prices don’t always live up to the pre-IPO hype, so know what you’re getting into, and don’t buy a stock just because you love the company’s product.

Jobs Report Redux: Taking a look back at Friday’s jobs report, there’s no escaping that disappointing headline number of 245,000, down from a revised 610,000 the previous month. However, a closer check reveals it wasn’t necessarily as bad as it seemed, in part because a chunk of the lost jobs came from the U.S. government as the 2020 Census count wrapped up.

One piece of good news that got a bit lost in the shuffle was the Labor Department reporting hourly wages up 0.3% in November and 4.4% year-over-year. That’s solid growth and could imply that the people still working aren’t all doing it for less pay. Even in normal times, a 4.4% annual pay raise would look pretty darn good for most people.

Why did stocks get a lift from disappointing job creation? It goes back to the same thing we used to see when the Fed didn’t have rates at zero. If we were in a normal rate situation and jobs data dipped, the market would tend to jump on hopes the Fed would be more dovish. Now the Fed is already as dovish as it can get, so the market jumped Friday on hopes that the bad jobs number would light a fire under Congress on fiscal stimulus. A package before the holidays looks a bit more in the realm of possibility today than it did before the jobs report.

Next Steps for Tech Darlings: Even if tech doesn’t dominate the way it’s been, there’s little doubt that some of the habits people picked up during the pandemic aren’t going away. That’s arguably good news for some of the smaller Tech companies whose stocks really shot the moon this year like Zoom (NASDAQ:ZM) and DocuSign (NASDAQ:DOCU). A lot of companies no one had heard of a year ago are part of everyone’s daily life. This doesn’t mean you’ll never take a flight again, or get a home loan. But people are much more comfortable working remotely, so it’s not like ZM will lose all its users once we reopen the economy.

The question could end up being how do companies like ZM monetize and create efficiencies and leverage multiple platforms into one offering? A lot of these small companies thought they had a few years to get that done, but they’ve had everything pulled forward due to the pandemic and now investors don’t seem happy just to hear about more monthly users. The ones who have trouble monetizing might be the ones who get swept up in future consolidation, as we just saw with Salesforce (NYSE:CRM) scooping up Slack (NYSE:WORK). Look out for more of that, possibly, in 2021.