So now we know what it takes to set a new record high: A big jump in consumer prices.

That’s just being a bit facetious. A little inflation is often good, because it can show strong trends in the economy. From what analysts have been saying, there’s plenty of pent-up demand for things like travel, outdoor activities, casinos, cruises, and hotels. If prices have to go up as a result, maybe that’s not so bad.

The real sort of message from this week is though the numbers are pointing to more inflationary pressures, the market continues to buy in or accept the Fed explanation that this is all transitory. That’s the narrative now, but we’ve seen it change quickly before and there’s no reason to think it can’t change quickly again.

More on inflation and the possible Fed and bond market reaction below. First, let’s take a look at what’s straight ahead today. Major indices turned green again in pre-market trading despite a lack of any real catalysts, but yesterday’s push through technical resistance to a new record high for the might be drawing some buying interest. Strength in Europe earlier Friday also could be providing a boost.

is still holding onto $70 a barrel, well, just barely holding on. That’s a level where airlines traditionally start to hedge.

On the data side, we get the University of Michigan Sentiment report just after the open. The 82.9 final reading for May was down from April, and inflation expectations in that report were the highest on record. Consensus among analysts is for a slight uptick to 83.5 in the first read for June, according to research firm Briefing.com. Consider keeping a close eye on the “expectations” category to see if higher prices are starting to hurt optimism about the economy.

That’s basically it as far as data, but next week kicks off with May retail sales on Tuesday after the April number came in flat. That essentially wraps up the “triumvirate” of key data points the Fed might be watching most closely as it gathers for its meeting Tuesday through Wednesday. The others were arguably the latest inflation numbers and the May jobs report.

Speaking of inflation, one analyst kind of summed up a lot of peoples’ feelings on Wall Street yesterday after the hot May consumer price data, writing, “The Fed had better be right about supply bottlenecks.”

With core consumer prices rising the most since 1992 and the Fed not seen budging from zero rates for over a year—according to the futures market—it would certainly help if the central bank is right about inflation being “transitory” due to supply chain issues and one-time demand spikes for stuff like used cars (see more below). That’s been its story all along, though we’ll likely learn more about how much they still worship at that altar after their meeting next week when Fed Chairman Powell holds his Wednesday press conference.

A few more months of this sort of inflation would potentially put the Fed into “catch-up” mode, where it might have to quickly dial back stimulus and perhaps even consider rate hikes much earlier than it had been thinking. There’s no guarantee such a strategy would work, especially if the market gets the impression that the Fed is skating behind the puck, so to speak.

It’s been decades since inflation spun out of control, but those who remember those days of double-digit mortgage rates as the Fed fought the Whip Inflation Now (WIN) battle probably don’t really relish the idea of a sequel. It almost certainly would get ugly on Wall Street if that happened, perhaps making the 2013 “taper tantrum” look like a kid’s party in comparison.

The closely watched fell to 1.43%. That’s basically the lowest it’s been since early March, a time when COVID continued to shut down parts of the economy and inflation wasn’t really a big factor. Some technical analysts see support at 1.35%.

Fighting The Fed Appears Out of Style — For Now

So if you listen to what the market’s telling you, the Fed is right that inflation isn’t here to stay. And until the central bank changes its tune, the old saying, “Don’t fight the Fed,” seems to be out in force. The so-called “bond vigilantes” some of us older traders remember remain on extended vacation, apparently. The bond market isn’t a hammer pounding on the Fed to get moving, the way it felt back in February and March, for instance.

Now, believe it or not, the word “deflation” is getting thrown around by some analysts. The failure (so far) of President Biden to get traction on an infrastructure plan that would have potentially injected around $1 trillion into the economy could be one factor pushing rates down, along with a new COVID outbreak in China, the drying up of stimulus payments and the looming end to pandemic-related extra unemployment benefits here. Some analysts also cite what they say is slow capital spending by U.S. companies, sometimes an early sign of weaker growth.

Beyond that, some recent jobs and housing data suggest the economy’s reopening cycle has potentially peaked. All this, plus the millions of people still unemployed in the wake of COVID, would potentially have the Fed less than eager to put on any brakes. As the analyst said, though, the Fed hopefully will be proven right and none of us will have to face a major inflationary cycle. Deflation would be almost as bad. The Fed is walking a tightrope, for sure.

Technically, the market might be in slightly better shape after punching through the record level yesterday for the S&P 500 Index near 4238 and closing above that. Sometimes this can attract buyers, or possibly short-covering, but the early returns didn’t look too amazing if you just count yesterday.

While an attempt to track back down toward technical support levels late Thursday morning failed, the market closed below its highs for the day and without a lot of zip. That was the SPX, where cyclicals have more of a presence. The Tech-dominated outpaced the broader market as growth appeared to get more love yesterday.

Earnings are over for the week after Chewy (NYSE:) exceeded analysts’ expectations late yesterday, so corporate news might be a bit thin today. In fact, with so little data and earnings on the calendar, it wouldn’t be surprising to see volume flag a bit ahead of the weekend. And early next week might bring choppiness and little sense of direction as people get positioned ahead of the Fed meeting.

In thin trading, minor news events can sometimes have a big impact on the market as people look for things to trade, so anyone trading today should be aware of that and prepare to be extra careful. At record highs, too, it’s important to consider your position sizing.

Meanwhile, volatility is at a level where veteran traders might be sniffing some summer doldrums. The Cboe Volatility Index () fell below 16 this morning and now looks like it might test the 15 barrier. It matched its post-Covid low of 15.15 earlier today. 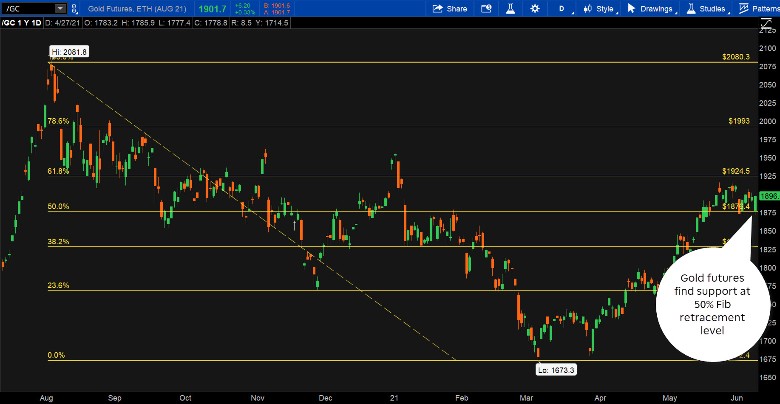 CHART OF THE DAY: GOLD’S BOUNCE. After falling on the release of inflation data, (/GC—candlestick) bounced off the $1876.40 price level, its 50% Fibonacci retracement level (yellow horizontal line). Could this be an indication that inflation worries may have eased? /GC has been bouncing around between the 50% and 61.8% retracement levels since last month. If it goes above $1915, the high reached earlier this month, it could hit the 61.8% level of $1924.50. Data source: CME Group (NASDAQ:). Chart source: The thinkorswim® platform. For illustrative purposes only. Past performance does not guarantee future results.

That Old Car Is Worth Money: One interesting (but perhaps unsurprising) tidbit from yesterday’s CPI number was the dramatic rise in the index for used cars and trucks, which came in at a whopping 7.3% increase. According to the Bureau of Labor Statistics, the used auto index accounted for one-third of the total increase in CPI. What gives? It looks to be a confluence of supply and demand factors. On the supply side, last year’s lockdowns shuttered many factories, lowering overall output. Plus, supply chain disruptions, including the ongoing semiconductor shortage, have further dampened the supply of new cars. Fewer new cars means fewer used cars in the trade-in pipeline.

And then there’s the demand side. Rental car agencies such as Hertz (HTZGQ), Avis Budget (NASDAQ:), and the privately-held Enterprise Holdings dumped fleets last year in a cost-cutting (and for some, lifesaving) move, only to find themselves scrambling for cars in anticipation of a resurgence in travel demand. And speaking of travel demand, last year’s lockdowns left many household travel and leisure budgets unspent. For some, travel budgets + stimulus checks = new toys. For others, auto demand was out of necessity, as many city dwellers moved to the suburbs, and even those who stayed behind found themselves less capable of relying on public transportation and ride-hailers Uber (NYSE:) and Lyft (NASDAQ:). But like inflation in general, it’ll be interesting to see whether used car inflation is a temporary phenomenon.

Smooth Ride for Travel Reopening? Not Really: The narrative around Wall Street lately is that the travel industry is finally recovering from COVID. Cruise lines are getting started again, and summer hotel bookings are massive. The road looks a bit bumpier after this week, which tells you that returning the travel industry to normal might be more like a gruelling camping trip than a comfy night at a luxury resort. First of all, two passengers on a Celebrity Cruises ship—a cruise line owned by Royal Caribbean (NYSE:)—tested positive for COVID when the cruise ended, the Washington Post reported. Then you have crude prices of $70 a barrel, which could start to hurt margins for many airlines and cruise lines. The $3 a gallon gas could make people think twice before a long driving trip, too. All this the same week that Southwest (LUV) ordered more than 30 new planes from Boeing (NYSE:). The travel industry is kind of like the overall market right now, with everyone trying to figure out which way things are going and not a lot of clear answers.

A Month From Earnings, Clouds Gather Around Financials: It feels like earnings season just ended, but the next one is around the corner. Last time, the biggest Wall Street banks helped kick off earnings season with a bang. Firms like JPMorgan (NYSE:) (JPM), Goldman Sachs (NYSE:), and Morgan Stanley (NYSE:) started 2021 on a high note thanks in part to heavy trading activity and fast-rising yields. Both of those factors traditionally support earnings and revenue for these firms, partly because if more people are trading and investing, more money tends to go into the banks’ wallets. And higher yields traditionally help the gross profit margin not just of Wall Street behemoths, but of banks in general. The industry’s profit margins tend to rise when banks can lend money at higher rates.

Things aren’t so cut-and-dried as we approach the Q2 earnings season. The stock and bond markets have been stuck in a tight range basically since mid-May, with the S&P 500 Index staying between 4000 and 4200 most of that time and the benchmark 10-year Treasury yield between 1.5% and 1.7%. Volatility has also been drifting steadily southward, and all of this could combine to make trading less attractive to banking customers, potentially hindering revenue growth. This week’s dip back below 1.5% for the 10-year yield can’t look great if you’re running a bank, especially when it’s a far cry from the nearly 1.8% high posted back in late March. One thing maybe in the banks’ favor with Q2 earnings is easy comparisons to a year ago when COVID was raging, but how will the quarter-to-quarter comparisons look? Maybe not so amazing, considering the current fundamental picture.