“Spencer bought NIO a few days ago, and he is already up 35%”

The quote above is a friend’s text describing his 15-year-old’s investing prowess. When asked if Spencer realizes Nio Company (NYSE:NIO) is worth about twice the Ford Motor Company (NYSE:F), the reply was the equivalent of a blank stare.

Spencer, and many new investors/speculators, both young and old, are currently enamored with stocks.

Most of these new entrants are passive. Passive investors and speculators are taking center stage. As they do, they diminish the role of active investors. By default, this means that liquidity and capital flows become paramount to investing strategies. At the same time, fundamental and technical analysis fall by the wayside.

Most passive investors and all speculators lack fundamental and/or technical guidance. They have nothing to steer their decision making other than the current hype and narrative. Given this environment, we think it’s important to understand the new breed of investors and the narratives and media influencing them.

The democratization of investing is, in part, responsible for an onslaught of popularity in investing. Zero commissions and easy to use online trading platforms like Robinhood, open stock investing to the masses. Spencer and his buddies can open an app and buy a share or fraction of a share of NIO in an instant. 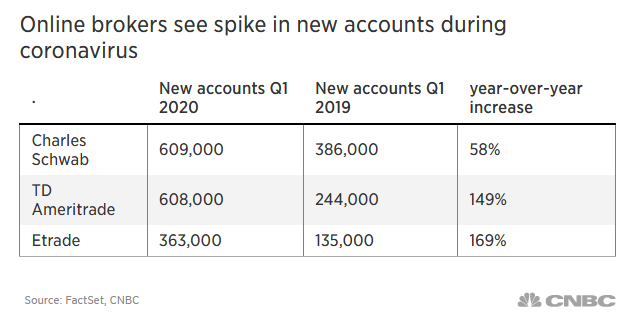 The ease of buying shares and upwards market trend make investing seem like easy street. In many respects, stock speculators are gamblers, but at times like today, they play with better odds. In sports betting, for example, the result is binary, win or lose. Bet enough, and you are almost guaranteed to bat .500. Sports betting, slots, and casino games have transaction fees, called a vigorish or vig. The roughly 50/50 odds and the vig all but guarantee that over time almost all gamblers lose.

Since March, the markets have been trending higher. As such, if you can follow the right narratives, and the trend is your friend, you can sustain, at least for a while, a greater than 50% win rate. Unlike Vegas, the market does not have a visible vig. There is an invisible vig, but that story is for another article.

Spencer and his friends know the market is up a lot in the last six months. They indeed have friends that made a “fortune” in this or that hot stock. Don’t we all have a friend or two that brags about cleaning up over the last few months? Everyone loves the get rich quick prospects.

Spencer does not have any insight into the fundamentals of NIO. He doesn’t know its sales revenue, how much money NIO makes or loses each quarter, how much debt it has, or other essential facts. We would venture to guess he has never considered what the market for Chinese electric cars is or will be. For that matter, he may not even know that NIO is a Chinese electric car manufacturer.

Spencer doesn’t care. He only wants to know what everyone else is doing. Spencer and millions of investors only care about the narrative. That day-to-day or hour-to-hour theme is what drives capital flows in today’s markets.

The birth of the internet has led to the enormous growth of online media. Traditional print newspapers and research publications ceded significant market share to various internet providers of news and market commentary. It de-centralized control over information flow away from the mainstream media giants.

Despite the changing medium, revenues for the media providers are still dictated by advertising dollars. What is different, however, are the metrics by which the effectiveness of advertising is assessed. Twenty years ago, the large majority of market commentary was in print form. Advertising rates were largely based on the demographics of subscribers for the respective publications. Those firms advertising and the media outlets were much less effective at discerning which articles were popular and driving sales and which had little to no effect or even negative effects on print media sales. Highlighting the simplicity of what used to drive newspaper headlines was the phrase “if it bleeds, it leads.”

Today, with a large majority of readership being on the internet, advertisers have an incredible amount of data. They harvest profile information on every single person (consumer) who enters their domain. They can hone in on specific demographics, geographic locations, time reading, and readers’ income with that information. Advertisers target advertising with magnificent accuracy.

The media, like all industries, focuses on profits. As such, they keep a close eye on which articles are heavily viewed and which are not. They know how many viewers read each article and how much time they spend on each piece. They also track to see what else their visitors are reading. Advertisers cherish these statistics and dole out money accordingly.

The media begs for “likes,” “hearts,” “re-Tweets,” “shares,” and an assortment of ways in which individuals re-distribute and promote articles. These seemingly innocuous clicks of a mouse help the publisher reach more eyes. Within that construct, authors who are employed or contracted by on-line media outlets are often incented by the web traffic their stories generate.

In the internet era, readers’ attention spans have rapidly diminished. Most people scan many more articles than ever before possible but read a lot less content in depth. To get clicks and eyes on an article and ultimately sell advertisements, headlines must grab the reader’s attention. Content must be concise to keep them engaged. It is what is known as “click-bait”.

With the stock market rising at a breakneck pace since March and capturing investors’ dreaming of riches, the number of authors exploiting market optimism is rapidly increasing. There are more articles that tout the market strength and the incredible upside potential that remains for “investors”.

Many such articles are not based on analytical rigor but on dollars and cents. The online media knows that titles such as “Stocks Fly High on Hopes for a Vaccine” will attract significantly more advertising revenue than “The Future Consequences of Deficit Spending, Zero Interest Rates, and QE Should Give Investors Concern.”

In 2007, which newspaper or online news provider forecasted the coming financial crisis? Who in February, even with evidence of COVID on our doorstep, thought the market would drop 30% in weeks?

The answer to both questions is a precious few. In 2007 and February 2020, many of today’s journalists do not have deep backgrounds in market history, valuations, finance, or economics. Most have never managed money or had to explain to a client why they lost money. Few will lose sleep if the market crashes.

Most online media providers are advertisers. They know that today’s bullishness is a hot commodity, and that is what they are selling. They do not have skin in the game.

The intent of on-line business news is to attract advertising dollars. Clicks and eyes pay the bills, not reliable content. That being the case, integrity and reliability often come second to popularity.

Popularity and advertising dollars are driving the decisions of Spencer and millions of other investors. Unpopular facts and reality are often dismissed. There is no profit in caution or prudence.

As investors, we need to see through the narrative. We must find well-thought-out articles, regardless of their titles. Some will make bullish cases, and some bearish. Still, importantly, the more views, opinions, and analyses from respected authors we read, the stronger our convictions will be, and ultimately the better we can assess the probabilities of long-term market trends.

Equally important, we must realize the current market structure is the one we have to invest in. If investors are influenced by hyperbole and a narrative that cheers on momentum-based speculation, we must understand that their actions can propel the market higher.

Narratives and fads drive today’s market, not what is rich or cheap. The current mindset will change in time, and hearts will be broken. In the meantime, however, we recognize that Spencer’s actions and the narratives backing them dictate market trends.