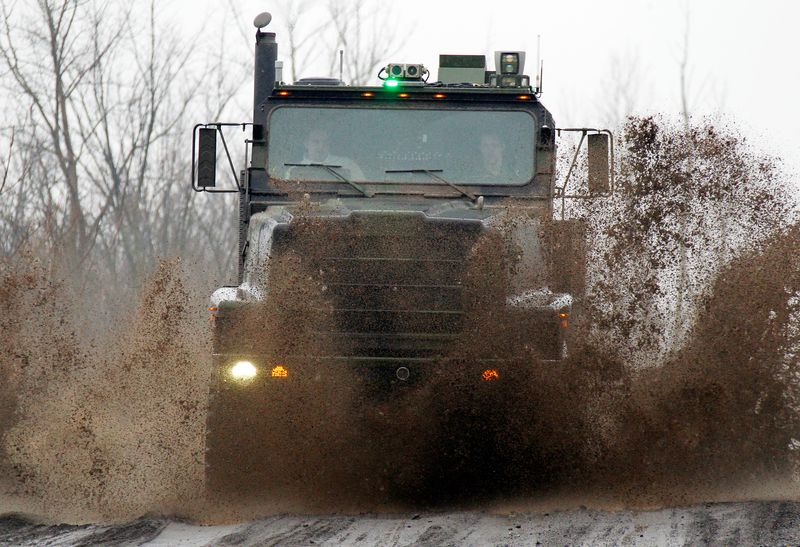 © Reuters. An Oshkosh truck using the TerraMax autonomous driving system drives along a mud-soaked test course outside of Pittsburgh

WASHINGTON (Reuters) – The U.S. Postal Service (USPS) said on Tuesday it will award a multibillion-dollar, 10-year contract to Oshkosh (NYSE:OSK) Defense to manufacture a new generation of postal delivery vehicles.

Under the initial $482 million investment, Oshkosh Defense, a unit of Oshkosh Corp, will finalize the production design, testing and vehicle tooling necessary prior to vehicle production.

The contract, which could be worth more than $6 billion in total, allows for delivery of between 50,000 to 165,000 of the vehicles over 10 years that will be a mix of internal combustion-powered and battery-electric vehicles. Oshkosh had teamed up with Ford Motor (NYSE:F) Co on its proposal based on a Transit van.

Oshkosh shares rose about 6.1% on the news. Shares of Workhorse Group Inc, a losing bidder that sought to build electric only vehicles, were briefly halted and lost almost half their value after the news.

USPS, which began planning to replace the current fleet in 2015, said the new vehicles could be retrofitted later with "electric vehicle technologies."

New USPS vehicles will begin deliveries in late 2023 and include air conditioning and heating, improved ergonomics, and advanced vehicle safety technology including air bags and 360-degree cameras. They will be able to carry more cargo and better accommodate higher package volumes.

Last month, President Joe Biden vowed to replace the U.S. government’s fleet of roughly 650,000 vehicles with electric models. The White House did not respond to a request for comment on the USPS contract decision.