The downswing was rejected, but did it need to happen in the first place?

Squaring the bets before Thursday‘s CPI doesn’t appear to be under way. The risk-on sentiment reigns in the credit markets, but value stocks aren’t cooperating, for they declined against the backdrop of a little-rising Treasury yields.

The probed lower values, and doesn’t look likely to have much success breaking below them. And the put/call ratio is still rather complacent. The S&P 500 rally is about to be challenged, but stocks will ultimately prevail. I look for the bad inflation data to spur momentary panic selling. The bets on taper will increase regardless of how distant that concept is. Stocks will waver, but will get over it eventually, while tech is probably going to do fine.

The U.S. dollar doesn’t look to be turning around. Thursday’s upswing has been erased, but look for the greenback to reflexively rise when confronted with “taper now” prospects. But is the Fed ready to welcome higher rates?

I look for plenty of assurances that the support would be very gradually withdrawn so as not to affect the markets. Toothless compromises for public consumption fit into the picture.

(…) The guessing game on the Fed’s taper goes on, and the upcoming CPI readings won’t add to the market’s peace. Most likely, it will fuel a sense of taper urgency as the inflation figures won’t be on the low side. Add in the job market slowly catching fire, and you’ll understand why I have been calling for months for elevated inflation readings.

While many of the counter agruments sound fine, they will be forgotten over the coming months. Commodities exerting cost-push influence, and job market pressures, would be a one-two punch to the transitory inflation arguments. Deflationary shock simply isn’t likely at the moment. The market will probably find out the Fed isn’t as serious about taper as it pretends to be. Or, we might be cushioned into a higher inflation environment and be told it’s for our own good.

remains vulnerable to an opportunistic dump, and along with commodities even more so. Look for precious metals to recover from the setback as the taper realization sinks in. Liquidity isn’t going away, and neither is inflation. Precious metals will like that.

‘s daily consolidation doesn’t rule out its continuation today, as the volume attests to. Don’t look for an end to its bull run, though.

is breaking below its recent closing lows, while is nowhere near challenging them. The disconnect is likely to grow wider as the BTC sentiment further sours.

Gold is tireless, but miners aren’t confirming in the short run.

Silver isn’t outperforming in any way, and it’s the chart that spells more consolidation ahead. That has implications for the red metal’s ratio to the – especially when it spikes on the misplaced taper fears dragging precious metals alongside. 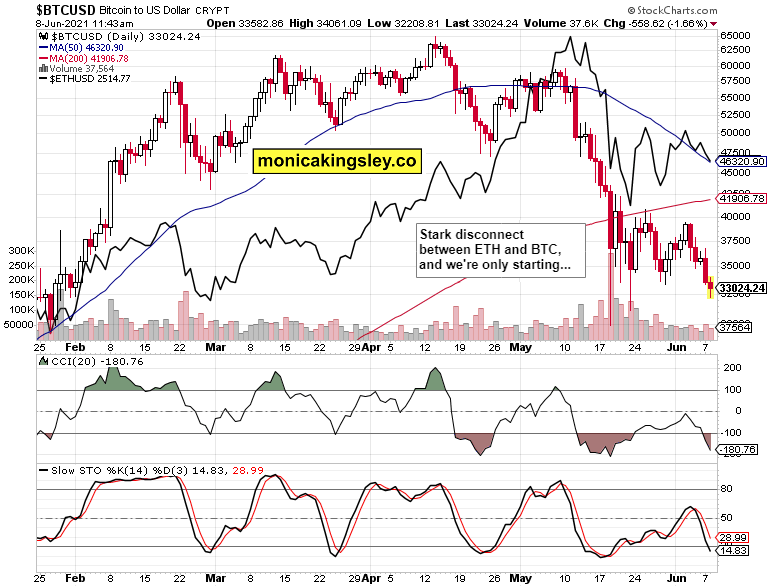 Bitcoin’s rebound off the break below its closing May lows is suspect at best. It cannot be trusted at the moment. Ethereum, on the other hand, is in much better shape.

S&P 500 bears shouldn’t expect too much success for credit markets are likely to support the upswing while value pares yesterday’s losses.

Gold and silver are likely to benefit – the yellow metal especially. Don’t look for silver to escape the coming tremors, though.

The crude oil chart remains bullish, and dips are likely to be bought before too long. The unfolding breather appears healthy thus far.

Bitcoin remains struggling, and the bulls better not expect too much. Ethereum is among the most resilient crypto spaces to be in right now.