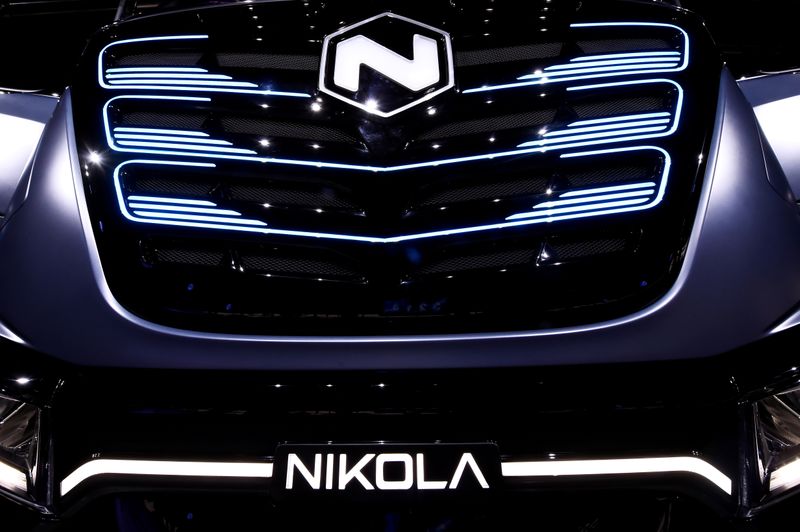 © Reuters. FILE PHOTO: U.S. Nikola's logo is pictured at an event in Turin

The stock posted a fourth straight session of declines. The share lockup period expired on Monday, 180 days after the startup's June merger with VectoIQ Acquisition and its Nasdaq public debut.

By late Tuesday, more than $1.2 billion worth of Nikola's shares had been traded on U.S. exchanges, compared with a daily average of about $1.9 billion over the past five sessions, according to Refinitiv data.

Nikola shares sold off Monday after GM scrapped its deal that involved an equity stake in the startup and plans for building Nikola's Badger electric pickup truck. It replaced it with a non-binding agreement where GM will supply its fuel-cell system to Nikola.

Analysts at RBC cut their price target on the stock by $2 to $17 following the news. The stock closed Tuesday at $17.37.

Nikola's former boss Trevor Milton owns most of Nikola's locked up shares, and under U.S. Securities and Exchange requirements would need to file notice within two business days following a sale of his shares.

A spokesman for Milton, who owns 91.6 million shares in Nikola, declined to comment on Milton's plans for his stake.

Milton stepped down as executive chairman in September following a squabble with short-seller Hindenburg Research over allegations of nepotism and fraud.

The short-seller report came days after GM first said it would help scale up Nikola's Badger electric pickup production and take an 11% stake and $700 million, putting the deal under scrutiny.

As of Monday, Nikola's short-sellers were profitable in 2020, with a net-of-financing mark-to-market profit of $309 million for the year, according to a report Monday from Ihor Dusaniwsky, managing director of predictive analytics at S3 Partners.

Shares of Nikola, which were at $33.75 after its early June market debut, surged to a record high of $93.99 later that month after Milton announced the company would start taking reservations for its highly anticipated Badger pickup.