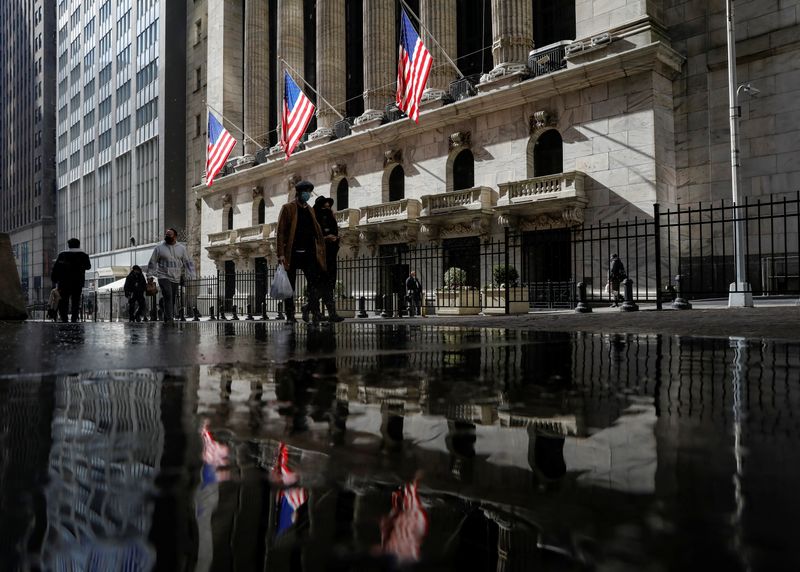 © Reuters. U.S. flags fly out in front of the NYSE is seen in New York

NEW YORK (Reuters) – The Nasdaq closed lower while the S&P 500 was little changed on Wednesday as investors rotated out of technology shares and concerns about inflation added some pressure on stocks.

The S&P 500 and the Nasdaq pared losses while the Dow added to gains after the release of minutes from the Federal Reserve's January policy meeting.

All of the meeting's participants supported the decision to maintain an accommodative monetary policy. The Fed has pledged to pin interest rates near zero until inflation rises to 2% and looks set to exceed that goal.

Yet the Fed's accomodative stance, coupled with President Joe Biden's proposed $1.9 trillion package for pandemic relief, has some analysts warning of a coming surge in inflation. As a result, some investors have worried that the Fed may have to change course sooner than expected.

Those fears, which have been bolstered by a sharp rise in benchmark Treasury yields, have contributed to recent market declines, with investors taking profits from market-leading technology stocks.

Inflation pressures may force the Fed to revise its policy in the future, said Michael O'Rourke, chief market strategist at JonesTrading in Stamford, Connecticut. But, he added, "It's a high threshold we have to cross in order to get them to react."

Wells Fargo (NYSE:WFC) & Co shares jumped 5.2% after a report said the lender won Fed acceptance for its proposal to overhaul its risk management and governance.

U.S.-listed shares of Shopify (NYSE:SHOP) Inc slid 3.3% after the Canadian e-commerce software giant hinted at slower revenue growth in 2021 as vaccine rollouts encourage people to return to stores after a year marked by an upsurge in online shopping.

Declining issues outnumbered advancing ones on the NYSE by a 1.42-to-1 ratio; on Nasdaq, a 1.60-to-1 ratio favored decliners.

Volume on U.S. exchanges was 14.31 billion shares, compared with the 15.99 billion average for the full session over the last 20 trading days.