Skip to content
Dasforex
Stock Analysis
More Wrangling Ahead For Stimulus Package, But Markets Take It In Stride
Stock Analysis
adminDecember 26, 2020 at 11:27 am
55 Views
0
54321
0 (0 votes)

After Congress passed the coronavirus relief bill, it seems that many in the market thought a signing by the president was a foregone conclusion. But in hindsight maybe it shouldn’t have been such a surprise that the package, long a focus of congressional wrangling, might be subject to a little bit more drama.

President Donald Trump last night, in a video on Twitter, disparaged the bill and called for changes, including raising the $600 stimulus checks to $2,000 for individuals. House Speaker Nancy Pelosi tweeted that Democrats are “ready to bring this to the floor this week by unanimous consent.”

The market, based on futures activity, initially was under pressure after the news, but has since recovered ground. Perhaps investors have been thinking about the bill being passed with veto-proof majorities in both houses of Congress, although Trump didn’t say he would veto it. If Trump simply doesn’t sign it, it could still become law.

On the other hand, if there is a new bill with bigger stimulus checks, that would probably be an added benefit for the economy. That prospect may be adding some lift to the market in hopes the extra cash in American pockets might boost consumer spending and give more support to a beleaguered economy.

In the latest sign of the economic fallout from COVID-19, the weekly report this morning came in at 803,000. While that does mark a decline from the previous week and is less than a Briefing.com consensus had expected, it’s still an astronomical number compared with the pre-coronavirus days. The third wave of infections in the United States has prompted governments to take measures to try to stem the spread, but those have also been resulting in more people being out of work.

A mixed finish for U.S. stocks on Tuesday seemed to be reflective of several different issues pulling investors in different directions.

In the bullish corner, investors seemed to be optimistic after Congress passed an $892-billion stimulus measure. Wall Street seems to be hoping that the stimulus checks and other aid for Main Street will help bolster the domestic economy, which is in the midst of setbacks related to the third wave of coronavirus infections.

While it seems that investors were cheering the stimulus development as a stopgap until the vaccines can be more widely distributed, that applause apparently was dampened by continued worries about a new coronavirus strain discovered in the United Kingdom. That ramped up concerns about the European economy as much of England was in lockdown and European Union countries banned travel from the UK.

It’s possible that dreary consumer confidence numbers also weighed on the market. (See more on that below.)

All of that comes against a backdrop of tension between profit-taking at the end of a stellar year for many stocks and a fear of missing out in case some of the market tailwinds—namely dovish fiscal and monetary policy—can help extend the rally into next year.

The bearish sentiment left the and to close in the red, but the bulls won out with the and the .

Because the RUT is composed of smaller cap domestic stocks that stand to benefit if the economic recovery in the U.S. gains more traction, it seems that was an area helped by the stimulus news and able to shrug off some of the international COVID-19 worries.

The small-cap index also has a good chunk of regional banks in it, so some of the gains may also have been related to the Fed’s announcement that banks can resume share buybacks in the first quarter, although repurchases when combined with dividends can’t exceed average profits from the four most recent quarters.

The tech heavy COMP got a jolt from mega-cap FAANG component Apple (NASDAQ:), whose shares climbed 2.85% on optimism following a Reuters report that the company is aiming to produce a passenger car that could include its own battery technology.

That would offer deep-pocketed competition for Tesla (NASDAQ:), whose shares continued to slip after its debut in the SPX. Of course, that competition from Apple is years away, and could be delayed by the coronavirus. So some of TSLA’s skid is likely due to profit-taking after a massive runup this year.

As the holiday-shortened week draws to a close, things could be relatively quiet, but there could also continue to be some profit-taking pressure as the year winds down. And don’t count out volatility—some money managers and market intermediaries start tiptoeing toward the door ahead of the holidays, which can make for choppy markets at times. 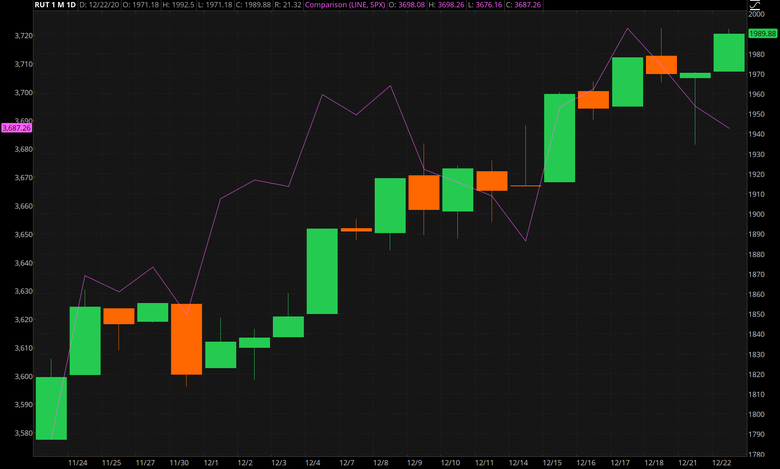 CHART OF THE DAY: MIXED SIGNALS: The Russell 2000 (RUT—candlestick) had a pretty good day yesterday even as the S&P 500 Index (SPX—purple line) finished in the red. It seems like the RUT got some help from optimism after Congress passed a stimulus package. But worries about the new coronavirus strain apparently helped pressure the broader index. Data sources: Russell Indexes, S&P Dow Jones Indices. Chart source: The thinkorswim® platform from TD Ameritrade (NASDAQ:). For illustrative purposes only. Past performance does not guarantee future results.

Consumer Confidence Slumps: The latest consumer confidence data from the Conference Board took a hit because of the third wave of COVID-19. The December measure declined to 88.6 from a downwardly revised 92.9 in the previous month. The new figure was well under the 96.5 expected in a Briefing.com consensus. It was interesting to note that even as consumers’ assessment of the current situation faltered, they did become moderately more optimistic about business conditions over the next six months. While we’ll have to wait and see, it seems plausible that widely distributed vaccines could indeed help move the business-conditions needle in the right direction.

What’s the (Brexit) Deal? If you’re wondering why the term “no-deal Brexit” is popping up in your news feed again, you might not be alone. After all, the UK formally left the EU in January. Seems like a lifetime ago, doesn’t it? But as with all things Brexit, it’s complicated. Even though the formal divorce has taken place, Britain still remains in the EU’s single market and customs union. The two entities are trying to hammer out a trade deal before the Dec. 31 deadline when a transition period is set to expire and the UK is scheduled to withdraw from that economic zone. So, during the negotiations prior to the formal exit in January a no-deal Brexit was referring to a divorce without a withdrawal agreement while the term now is referring to a transition deadline expiration without agreements on free trade and other issues, although there is some overlap.

Existing-Home Supply Tightens: The supply of existing homes for sale continues to shrink. The latest data, on Tuesday, showed that there are only enough existing homes for sale to last 2.3 months at the current sales pace, according to the National Association of Realtors (NAR). That’s down from 3.7 months in November 2019 and marked the lowest monthly supply number in NAR records. The median existing-home price for all housing types in November rose 14.6% year-on-year, with prices increasing in every region and the month’s national price increase marking 105 straight months of year-over-year gains. That’s great for sellers but not so great for buyers. “The key takeaway from the report is that the supply of existing homes is at an all-time low,” according to Briefing.com. “That is going to be a pressure point that feeds higher prices, shuts out an increasing number of first-time buyers, and bolsters the prospects for new home sales.”