McAfee still carries a tarnished reputation for annoying bundled virus software and its nutty former founder’s namesake. However, the Company is undergoing a transformation as an endpoint enterprise cybersecurity play. Prudent investors looking for exposure into one of the cheapest cybersecurity brands can look for opportunistic pullback levels on McAfee shares.

Unlevered free cash flow for the first nine months in 2020 grew to $639 million versus $454 million for prior year period. The Company ended the quarter with 17.3 million core direct-to-consumers (DTC) subscribers, adding over 2.4 million net new subscribers YoY. The Company was named a Leader in the 2020 Gartner Magic Quadrant for Cloud Access Security Broker (CASB) for the fourth consecutive year.

The Company completed its 37 million share IPO and used a portion of net proceeds to pay down second lien debt of $525 million. The Company provided Q4 adjusted EBITDA guidance of $254 million to $264 million. Q4 revenues are expected to come in the range of $732 million to $742 million.

McAfee sold off after the earnings release despite decent results. For whatever reason, whether it’s the infamous founder John McAfee’s murder charges or muscle memory stemming from its weak stock performance in its prior publicly listed trading, McAfee shares just seem to sell the news.

However, upon closer investigation this is a transformed company. The Company may be best known for its annoying bundled McAfee virus protection program bundled (more like embedded) in with most PCs. The Company was originally founded in 1987 and acquired in 2010 by Intel (NASDAQ:INTC). Eventually Intel sold the majority stake to private equity firm TPG Capital. McAfee is a mature company, not a hypergrowth start-up.

The Company has grown its enterprise segment to the size of its consumer segment. McAfee offers Total Protection plans which incorporate malware and virus protection, multi-device coverage, secure VPN, shredder and encrypted storage and the ultimate plan includes identity theft. It’s a virtual one-stop shop for cybersecurity for consumers. On the enterprise front, McAfee provides endpoint security protecting devices connected to a network competing with the likes of CrowdStrike,

McAfee’s real strength is its #2 position as a leader in CASB in Gartner’s Cloud Access Service Broker Magic Quadrant rankings behind Microsoft (NASDAQ:MSFT). McAfee CASB customers include 86% of the Fortune 100 companies and 61% of Global 2000 companies. In a nutshell McAfee has approximately 9% market share of the cybersecurity market, under the total addressable market (TAM) estimates of $30.4 billion in 2020.

The consumer segment still accounts for most of the growth (16% in 2019), but there’s room to grow for enterprise (1% in 2019), especially with the elevated awareness of professional and government sponsored hacking groups highlighted by the Supernova hack. Prudent investors that can look beneath the surface and crappy legacy reputation can monitor McAfee shares for opportunistic pullback levels to gain exposure ahead of the sentiment change. 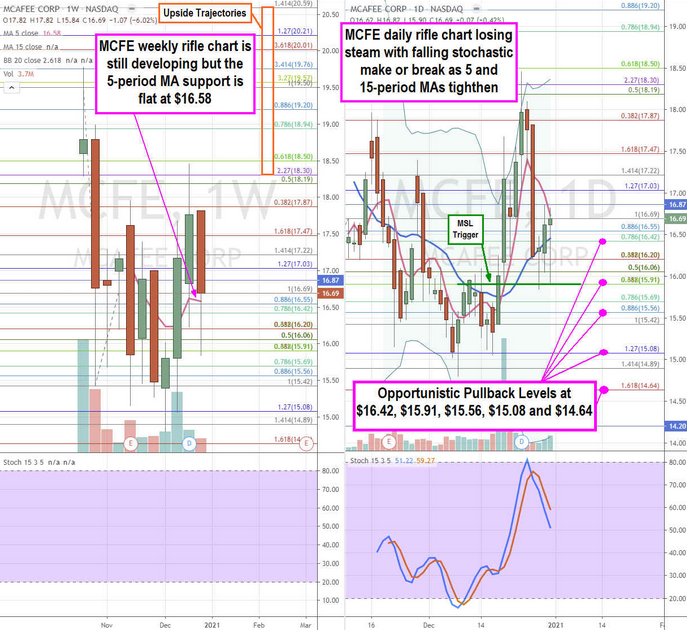 Using the rifle charts on the weekly and daily time frames enables a more precise near-term view of the price action playing field for MCFE stock. Due to the limited trading data, the weekly rifle chart is still developing but the 5-period moving average (MA) support is flat near the $16.55 Fibonacci (fib) level.

The daily rifle chart illustrates the peaking of the momentum as the 5-period MA slopes down towards the 15-period MA at $16.42 with stochastic in a mini inverse pup oscillation down through the 50-band. The daily rifle chart formed a market structure low (MSL) trigger above $15.91, but also formed a market structure high (MSH) sell trigger below $16.20. MCFE doesn’t trade in a very large range.