It seems that a holding pattern may be developing in the stock market ahead of Friday’s closely-watched employment report.

On the one hand, earnings season continues to be better than expected, the vaccine rollout is engendering more optimism, the number of new COVID-19 cases in the United States is retreating, investors are expecting more government stimulus and economic data has been looking up.

At the same time, there seems to be concern about high valuations in the market, meaning that stocks don’t necessarily move higher even if their companies beat expectations. It seems that investors and traders may be waiting for another catalyst to move the market meaningfully higher.

We’ve also seen a lot of movement in stocks this week, and today might be a reset day, where investors and traders catch their breath and get their bearings.

The market is returning its focus to fundamentals, like economic data, after the non-fundamental hubbub surrounding short squeezes. On that note, the weekly jobless claims number—which has been a closely watched barometer of economic health during the pandemic—was quite a bit better than expected. Initial claims came in at 779,000 when a Briefing.com consensus had expected 825,000.

As earnings season rolls along, top- and bottom-line beats have come from eBay (NASDAQ:EBAY) and PayPal (NASDAQ:PYPL). The companies benefited from online holiday shopping as more people stayed home and clicked on their purchases during the pandemic. That’s good for those companies, but it also is a reminder that the stay-at-home trade is still doing so well because we’re not out of the woods when it comes to the virus’s economic ramifications. Both stocks were up more than 9% this morning.

Meanwhile, U.S. oil futures are on the rise and pressing toward $60 a barrel, helped by news that major producers extended a policy of reduced output and U.S. crude oil stockpiles fell. In a broader sense, oil has been helped as the economic outlook slowly brightens. But rising oil prices are also a double-edged sword for some, such as airline companies already hit by travel restrictions during the pandemic.

On Wednesday, the ADP National Employment Report showed that the U.S. private sector added 174,000 jobs in January, well above the 55,000 jobs expected in a Briefing.com consensus. Also encouragingly, the previous month’s figure was revised upwardly, showing a loss of just 78,000 jobs compared with the 123,000 jobs previously reported.

On Friday, the government is scheduled to release its January non-farm payrolls data. While the ADP report is by no means a guarantee that the government figures will also beat expectations, it probably couldn’t hurt to cross your fingers on this one. (See more below.)

Another stronger-than-forecast economic data point came Wednesday from the services sector. The Institute for Supply Management said its index of non-manufacturing activity rose to 58.7, eclipsing the 57% expected in a Briefing.com consensus. The prior month’s reading was also revised higher.

Also, in addition to the optimism from positive data additions, it seems that investors’ nerves seem to be calming from subtraction as well. Namely, worries about short squeezes and their potential ripple effects on the market appear to be receding, helping people get back to focusing on market fundamentals.

With that happening, Wall Street’s main fear gauge, the Cboe Volatility Index (VIX) eased below 23 on Wednesday, and demand for long-dated U.S. government debt waned, boosting yields for the five-, 10-, and 30-year Treasuries. It’s hard to believe that, barely a week ago, the VIX screamed to 37 and the 10-year flirted with 1% in last week’s mini-meltdown. 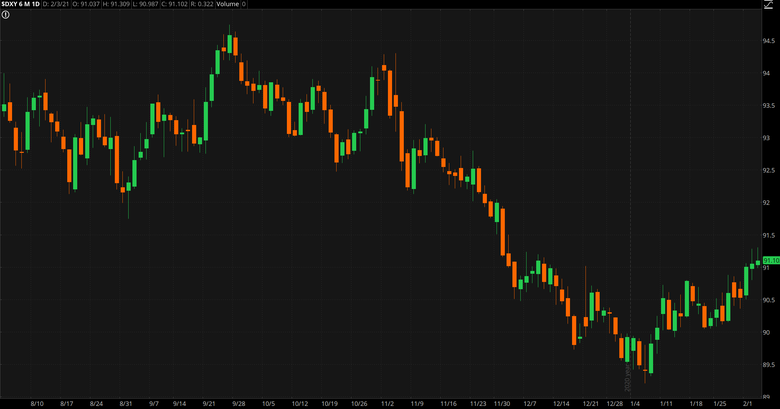 CHART OF THE DAY: THE BUCK’S SLIDE STOPS HERE? The ICE (NYSE:ICE) U.S. Dollar Index, which measures the U.S. dollar against a basket of other major currencies, seems to have arrested its downtrend, perhaps partly on signs of improvement in the U.S. economy. The greenback had been sliding in recent months amid worry about the domestic economy, but also as Federal Reserve and Congressional efforts to boost the economy diluted its value. A weakening euro has contributed to the dollar’s stronger position in the index of late. Data source: ICE Data Services. Chart source: The thinkorswim® platform from TD Ameritrade (NASDAQ:AMTD). For illustrative purposes only. Past performance does not guarantee future results.

EPS Optimism: Yesterday, we talked about how earnings estimates have been on the rise and company reports in general have been pretty good, especially in light of fourth quarter lockdowns. CFRA, an investment research firm, added to that narrative with a note on Wednesday, saying that “the Q4 EPS reporting period continues to offer encouragement.” S&P Capital IQ consensus estimates show Q4 S&P 500 Index EPS results coming in more than 900 basis-points stronger than the end-of-quarter projection, CFRA said. Earnings per share for 2021 should come in at more than $170/share versus the $165 projected at the beginning of the fourth quarter reporting period. It also seems like the market is more able to pay attention to the stronger-than-forecast earnings season now that some of the speculative distraction from recent days has eased. “Now that the short-squeeze frenzy appears to have abated, the markets are refocusing on the fundamentals,” the CFRA note said.

Adding To Ad Sales: In addition to encouraging data, promising signs for the economy have also come as mega-cap companies have opened their books on quarterly performance. Alphabet (NASDAQ:GOOGL) beat earnings and revenue expectations, helped by another quarter of accelerating advertising revenue. Meanwhile, Amazon (NASDAQ:AMZN), another big platform that just topped estimates on both its top and bottom lines, has also seen increasing ad revenue. Stronger ad revenue isn’t just good for the companies; it also seems to be another indicator of rising economic strength.

Crossing Fingers: Economic data we’ve seen this week has been encouraging ahead of Friday’s January jobs report. Yesterday’s numbers from ADP and the Institute for Supply Management—as well as a print from earlier in the week that showed construction spending increased more than expected in December—might be leading the optimism ahead of Friday’s payrolls report. Although the construction spending data point is from the prior month, it was the third straight month in positive territory, perhaps indicating a trend that might have continued in January. Will Friday’s employment data show growth in construction employment continuing to counter losses sustained in the leisure and hospitality sector? Stay tuned.

Disclaimer: TD Ameritrade® commentary for educational purposes only. Member SIPC. Options involve risks and are not suitable for all investors. Please read Characteristics and Risks of Standardized Options.Original Article