Over the last few week’s we discussed the ongoing “buy signals” suggesting the market could retest all-time highs. That occurred this week. However,

“The good news is that we did indeed get the rally we were expecting. The not-so-good news is that the rally already consumed a majority of the ‘buy signal.’ Such does not mean the market is about to correct; it does suggest that upside remains limited near term.” 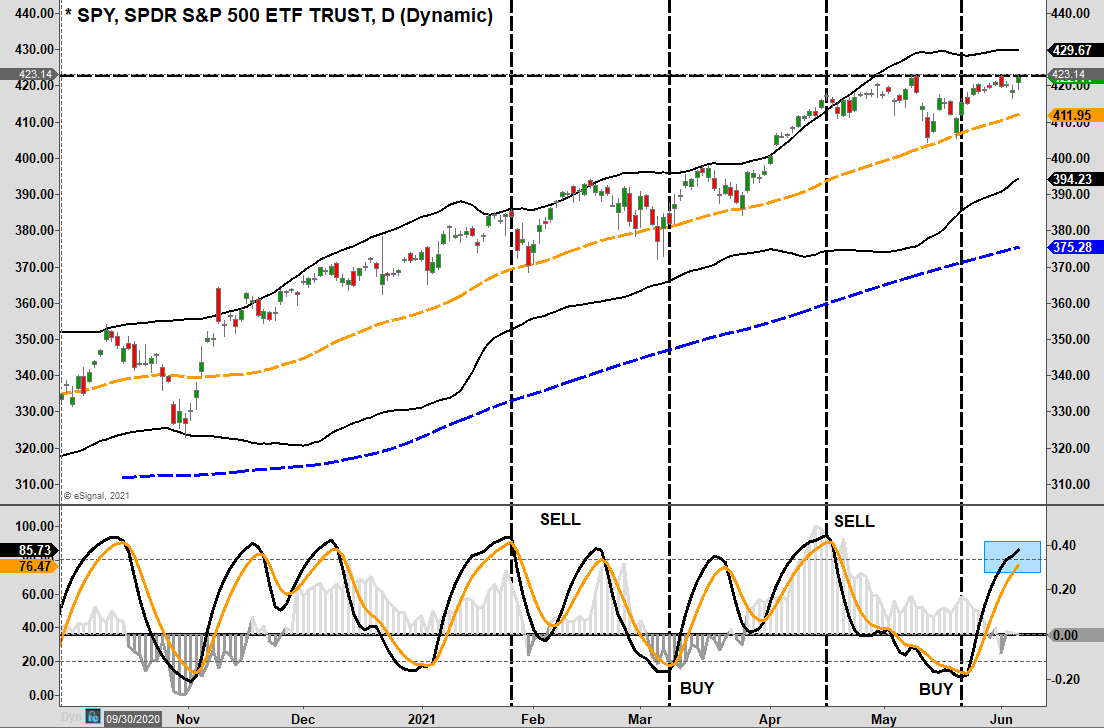 As shown in the bottom panel, the RIA PRO “Money Flow” signal is now into overbought territory. While the markets could undoubtedly break out to new highs this week, the upside remains limited. Such is due to the weekly signal, which is very close to triggering. 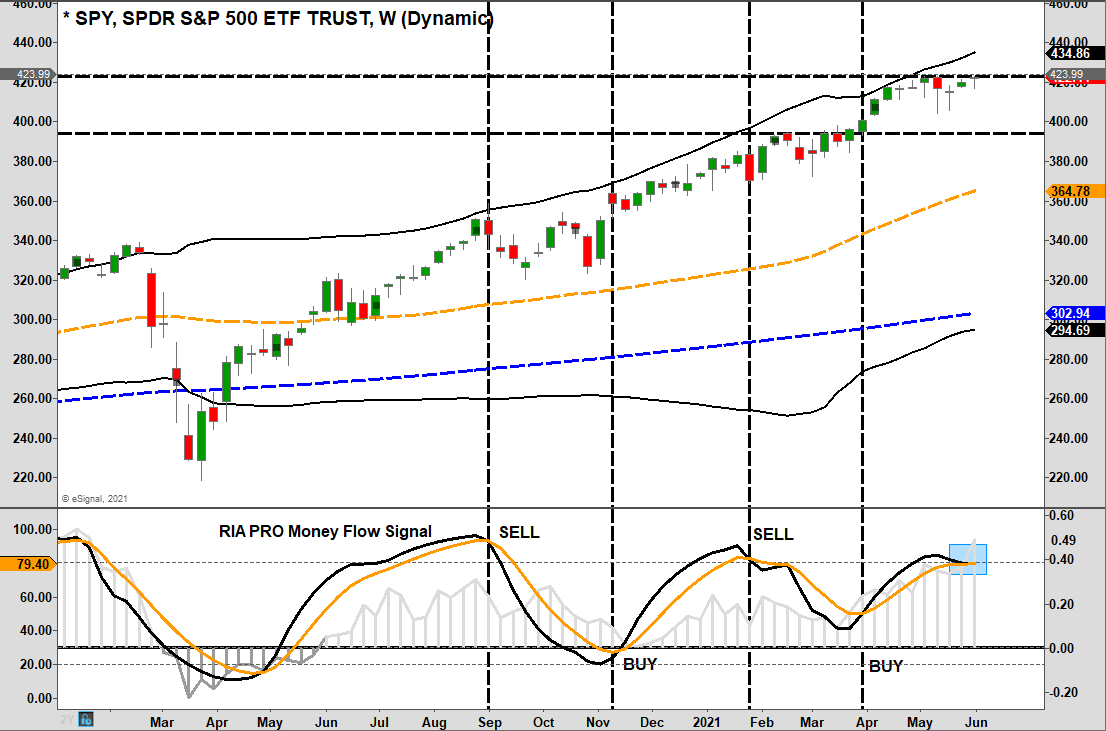 I will lay out the case for a summer “sell-off” momentarily, but let me recap what these signals do and don’t mean.

Technical Analysis In A Mania

On Friday, I received an email asking an essential question:

“I enjoyed your piece this week on . I am starting to believe the Fed has achieved a ‘Permanently High Plateau’ for asset prices because there seems to be nothing to derail the endless risk appetite for any asset.

“However, in the futile exercise of trying to stay disciplined I don’t want to abandon valuations and technicals.”

The biggest problem is that technical indicators do not distinguish between a consolidation, a correction, or an outright bear market. As such, if you ignore the signals as they occur, by the time you realize it’s a deep correction, it is too late to do much about it.

Therefore, we must treat each signal with the same respect and adjust risk accordingly. The opportunity costs of doing so are minimal.

Such is the biggest problem with “buy and hold” strategies. Yes, you will perform in-line with the market, but given that you didn’t “sell high,” there is no cash available with which to “buy low” in the future.

While I agree you can not “time the markets,”

Risk Of A Summer Selloff

Over the last three weeks, we have discussed that while we had added exposure to portfolios in anticipation of a short-term rally, we still expect a more significant correction this summer. There are several reasons for this.

The first is that a 5% correction is likely one or more times in any given year. Given the last correction was in the summer of 2020, such makes the current stretch of a low volatility advance one of the longer ones on record. 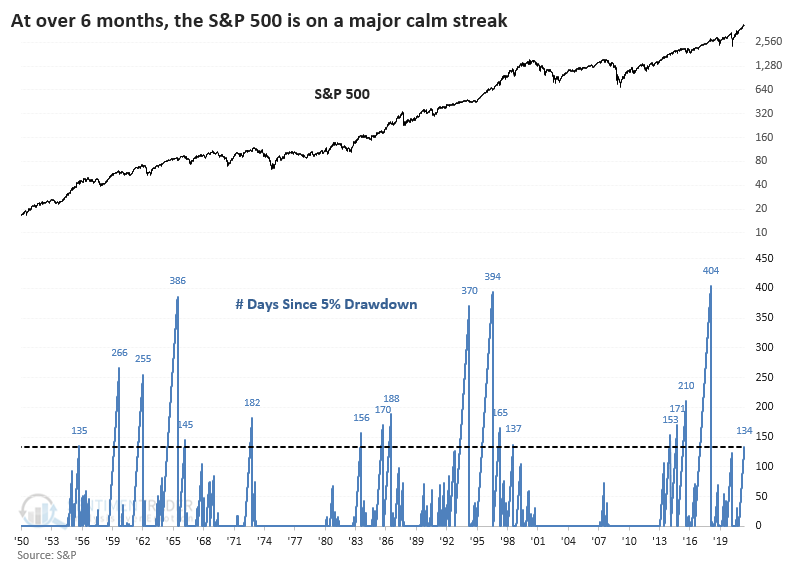 Secondly, as noted by Variant Perception recently, the market has been tracking the post-correction/bear market rally analog. Such also suggests a pause given the strength of the rally from the previous lows. 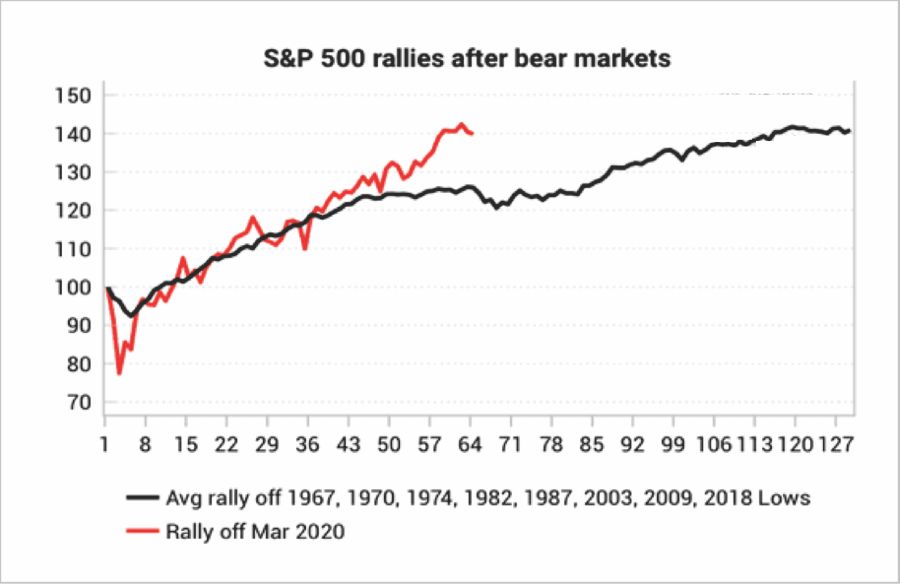 Lastly, money flows into stocks may have peaked after a massive surge in inflows over the last 9-months. As shown by Bespoke:

All of these signposts suggest a risk of a correction in the near term. However, as stated above, technical analysis does not differentiate between a 5% pullback, a 10% correction, and a 20% decline.

You will only find that out once it begins.

Risk management is much like driving a car. If there is a blind spot ahead, and you don’t tap on the brakes to control your speed, you are unlikely to avoid the hazard ahead.

Yes, tapping on the brakes to provide more control over the car will slow your arrival time to your destination. However, being late is a much better option than not getting there at all.

A recent note from Doug Kass summed up the current market environment well.

“Stocks and bonds are richly priced. It makes no sense to say, as many do, that equities are inexpensive against an overpriced asset class (fixed income). Most traditional metrics indicate that stocks are at least in the 95th percentile—a non-trivial amount of indicators of valuation are in the 99th percentile.” 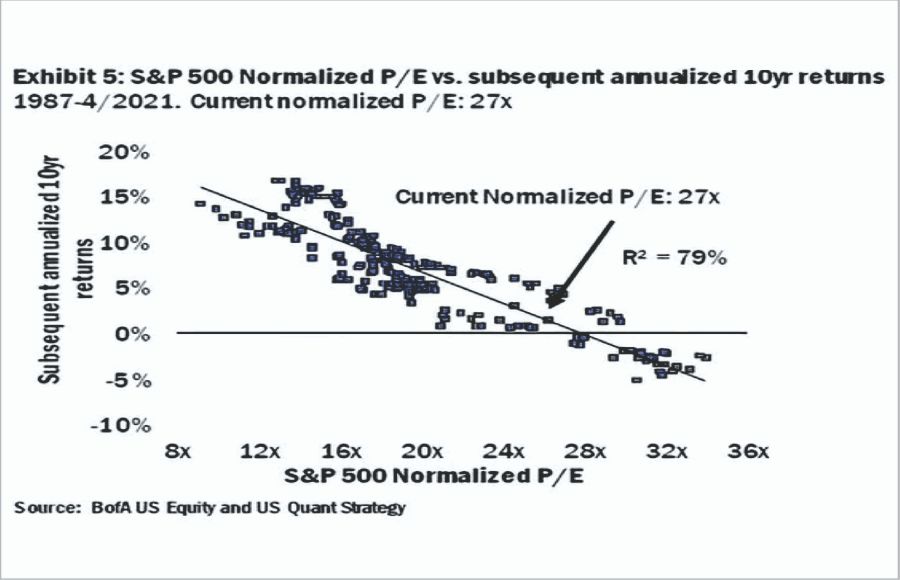 Of course, such DOES NOT mean the market is about to crash, and you should hide in cash. However, the elevation in valuations, combined with the chase in “Meme” stocks like AMC Entertainment Holdings Inc (NYSE:), and cryptocurrencies are just the latest manifestations of risk-taking by investors.

A look at small-capitalization companies (which are the riskiest of stocks) and their deviation from long-term means also is representative of “speculation” (The 200-week moving average has been consistent support for small-caps since 2008. The current deviation is unprecedented.) 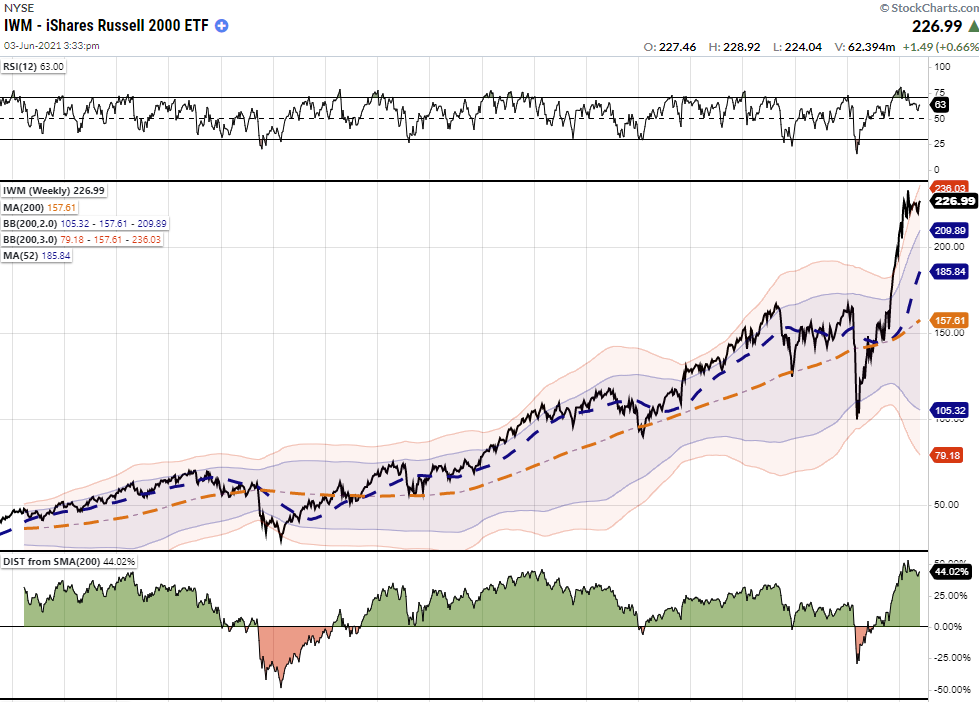 Even with the expected surge in earnings, the index is still trading at more the 28x earnings based on estimates 2-years into the future. Such means that expected returns over the next 24-months for small-cap stocks are now close to zero. 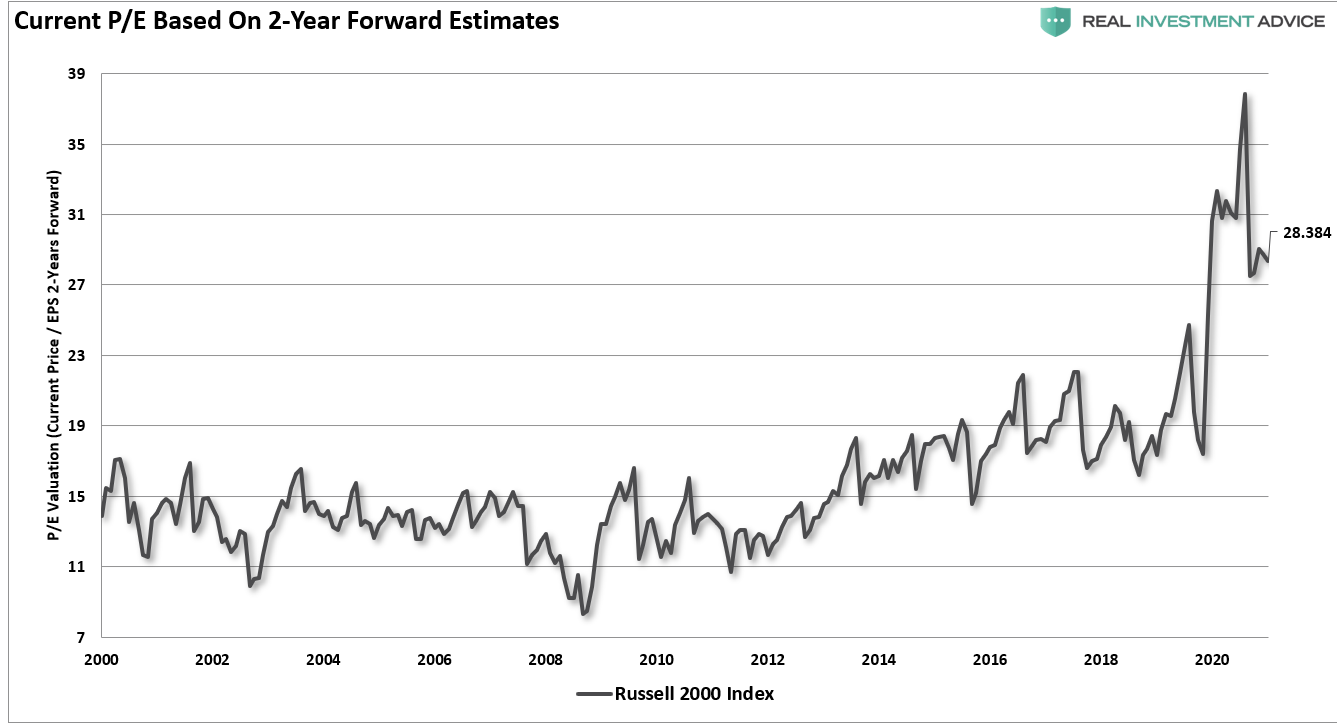 Then there is the problem with “value” stocks.

The Lack Of Value In Value

Over the years, “value” has been the cornerstone of investing. The reason is that during “bear markets,” the speculative excesses get wrung out, and investors search for “value” as a store of safety. The problem is that since there hasn’t been an actual , there is relatively little value in “value stocks.”

An excellent example is the iShares MSCI USA Momentum Factor ETF (NYSE:) that switched from growth stocks to value stocks. The same is occurring in other factor-based ETFs. For instance, the two top holdings of iShares Russell 2000 Value ETF (NYSE:), are GameStop (NYSE:) and AMC Entertainment which are about as far from value as one can imagine.

The problem will be whether the “economic expansion” will allow earnings growth to justify current valuations. However, three massive rounds of stimulus “pulled forward” several years of sales, which will become problematic as economic growth slows.

As noted, there is little “value” in the “value trade. As discussed in 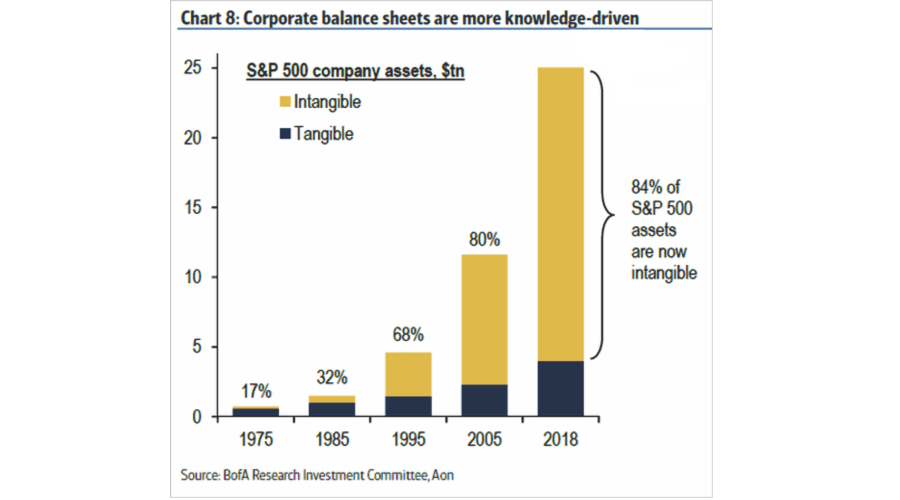 “Book value analysis and buying companies with low ‘price-to-book’ ratios have historically been profitable ventures. Companies with machinery, inventory, and equipment, and financial assets tend to have large book values. Significantly, these types of investments are easily valued and liquidated in the event of financial stress or bankruptcy.”

However, today, such is no longer the case. Items such as patents, licenses, human capital, etc., now make up a significant portion of a company’s “value.” These types of assets are hard to value and more difficult to liquidate.

So, how many NON-FINANCIAL companies in the currently have a price-to-book ratio below 1.5x? How about 18.

With our weekly “sell” signal now triggered on the S&P 500, and the daily signals back to very overbought levels, we liquidated the rest of our Invesco QQQ Trust (NASDAQ:) index trading position. The sell locked in the recent gains and raised our cash levels to buffer our overall portfolio allocations.

The rest of the portfolio remains balanced between the “inflation” and “deflation” trade to lower overall volatility. The “barbell” approach to the reopening trade has worked well given the rapid rotations between the two “schools” over the last few months.

We certainly don’t profess to have all the answers, but there is no argument we will see robust short-term growth and rising inflationary pressures. Such suggests the “value trade” may persist for a while longer. Those sectors remain , , , and for now.

However, we also continue to add to “deflationary” holdings opportunistically as economic growth will return to its 2%ish long-term trend. , , and remain increasingly recession-proof due to the changing workforce, demographic trends, and living standards.

We are firm believers in “value investing.” However, after years of artificial interventions, accounting gimmicks, share buybacks, and massive balance sheet leveraging, there is little “real” value in the markets currently.

Given that the markets have not reset, speculators are now simply chasing whatever is moving higher. For now, we have to continue to navigate markets for what they are rather than what we “hope” they could be.

We suspect that this year could wind up disappointing both economists and investors alike.