Cryptocurrency mining company Marathon Patent (NASDAQ:MARA) stock has exploded in the past few months thanks to the surge in Bitcoin values. While there are a number of thinly traded blockchain ETFs, Bitcoin has yet to have an SEC approved tracking ETF. Mining rig component makers like Advanced Micro Devices (NASDAQ:AMD) and NVIDIA (NASDAQ:) are seeing a surge as their graphic processor cards power them. Until then, investors may look to find alternative derivatives to ride the Bitcoin momentum. It’s very much like how junior gold mining stocks tend to move with large price moves in gold, Marathon would be the junior gold miner. Instead of mining gold, it’s mining cryptocurrencies, notably Bitcoin. The markets would have to establish this narrative. Marathon has the potential to become one of the largest publicly traded crypto miners by the end of 2021. For high risk-tolerant investors that seek a potential liquid derivative of Bitcoin, Marathon Patent may be the vehicle to play it. Watch for opportunistic pullback opportunities during the decoupled periods for speculative exposure.

“With only 2,600 miners in operation in September when Bitcoin was trading at $10,000, the company generated $650,000 in Bitcoin revenue, our largest quarterly Bitcoin revenue in history. By the end of the second quarter in 2021, we will have 23,560 miners deployed which equate to a greater than 1100% increase in mining capacity. At current Bitcoin prices, our deployment of new miners has the potential to produce more than an 11 fold increase in our monthly revenue as compared to our September 2020 revenue production.”

Governments and Central Banks are weary of cryptocurrencies for a multitude of reasons. While U.S. banks are tightly regulated to track funds and prevent money laundering, the decentralized nature of Bitcoin and cryptocurrencies is a nightmare to combat criminal activities. The U.S. Treasury Secretary Steve Mnuchin is rumored to be attempting to rollout new regulation for crypto exchanges in 2021. However, there is hope that his replacement Janet Yellen will have a more “friendlier” stance on cryptocurrencies as she has been receptive to the digital asset.

How High Can Bitcoin Rise?

This is the million-dollar question. Bitcoin prices jumped 40% in December 2020. Some analysts peg the upside as high as $400,000 while others call it another bubble in the making. The main underlying factor is the ever dwindling supply since only 21 million Bitcoins will ever exist. The scarcity as prices rise alone can drive FOMO demand higher especially as institutions are stepping into the game after companies like PayPal (NASDAQ:PYPL) and MicroStrategy (NASDAQ:MSTR) lead the way loading up on Bitcoin investment. The approval of a Bitcoin tracking ETF will undoubtedly surge prices higher. The lack of pattern day trading (PDT) rule restriction and 24/7 around the clock trading enables Robinhood traders full access. As for fundamentals, there are none. It was originally created as a store of value, but that argument only works when prices remain stable. When Bitcoin collapsed over (-80%) after peaking around $20,000 in December 2017 to $3000s by November 2018, it was hardly a “store of value” for those who chased it. This is uncharted territory, literally. It could be a worldwide game of musical chairs driven by scarcity. High-risk speculators seeking exposure should monitor opportunistic pullback levels on Marathon Patent for entries. 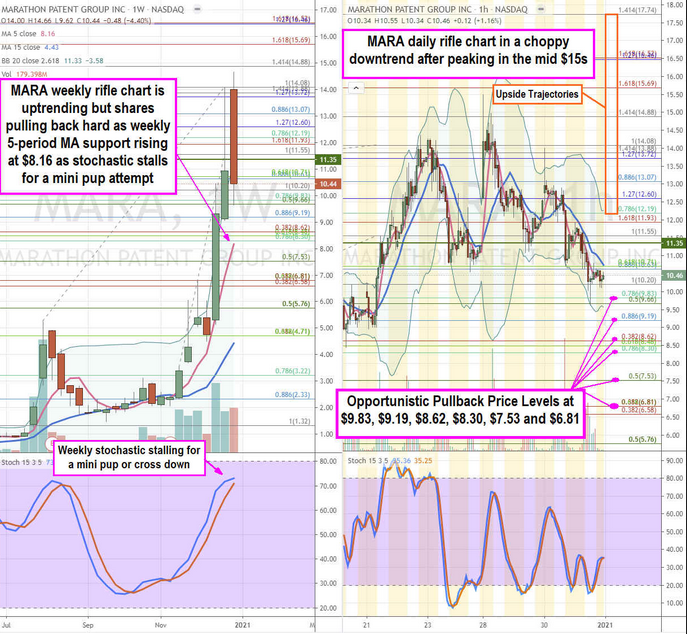 Using the rifle charts on the weekly and daily time frames enables a more precise near-term view of the price action playing field for MARA stock. Keep in mind that MARA correlation to Bitcoin has diverged after peaking in the $15s. Whether correlation with Bitcoin remains consistent is the wildcard but should improve as more miner rigs go online. The weekly rifle chart is uptrending but pulling back hard after peaking.

The weekly 5-period moving average (MA) is rising at $8.16. The weekly stochastic is stalling for either a mini pup breakout or cross down for channel tightening selling towards the weekly 15-period MA. The daily rifle chart has been down trending with daily stochastic divergence tops. The daily market structure low (MSL) trigger is above $11.35. The daily lower Bollinger Bands (BBs) sit near the $9.66 Fibonacci (fib) level. Due to the volatility, it’s important to control size allocations and scale in and out of positions. The cheaper the price levels, the less risk incurred but that’s also relative to sizing and holding period. The opportunistic pullback levels are at the $9.86 fib, $9.19 fib, $8.62 fib, $8.30 fib, $7.53 fib and the $6.81 fib. The upside trajectories range from the $12.19 fib up to the $17.74 fib. This stock is only suitable for nimble seasoned traders and high-risk tolerant investors.