If you’re reading this, then apparently you weren’t affected by a global internet outage that hit many news websites. The outage appeared to hurt stock futures overnight, but things recovered to flat in the hours right before the open.

Flat might be the word of the day, and maybe the week, at least so far. We’re flirting with record highs, but not quite reaching them. Will today be the day? Maybe, but it would help to have a few catalysts. There aren’t a lot out there, by any stretch of the imagination.

It’s one of those times when investors have to be super careful, because when there’s nothing to trade on, stories that normally wouldn’t get a lot of play can sometimes start to seem really important. The market might move quickly up or down on stuff that usually would get overlooked, especially any geopolitical news or comments from the Fed. So stay on the lookout.

The week is back-weighted a bit, mainly because of Thursday’s consumer price index report and Friday’s Michigan sentiment data. The CPI report (more below) is the last major inflation-related data the Fed will see before its meeting next week.

Today’s data scene is dominated by the monthly Job Openings and Labor Turnover Survey () for April. The previous report showed more than 8.1 million job openings, which was historically high. Some economists think government assistance might be preventing people from getting back to work, but virus fears and lack of child care could also play into this.

Close But No Cigar Again

It’s only been a month since the set its latest all-time high at around 4238, but getting back to that point feels like climbing Everest.

On Monday, for the second straight session, the SPX crept within points of that peak only to pull back and finish lower. The is also flirting with and being repelled from all-time highs. Tech stocks and small-caps had the best start to the week, lifting the and the Index on Monday.

The RUT drew support from health care, which owns the biggest weighting in the index. The entire health sector powered higher Monday after the U.S. Food and Drug Administration (FDA) approved Biogen’s Alzheimer’s treatment (much more below). Biogen Inc (NASDAQ:) shares jumped a massive 38% on Monday. Other companies working on treatments for the disease, notably Eli Lilly (NYSE:), appeared to benefit from the approval too. LLY gained 10%.

Meanwhile, the bond market barely moved Monday, at least for the closely followed . It’s stuck below 1.55% again this morning—near where some analysts see technical support at 1.52%—even as investors await a couple of large government bond auctions scheduled this week. If demand at these auctions flags, maybe that could push yields back up. For the moment, however, it feels like investors are a bit more relaxed about yields after last week’s mellow jobs report.

If there’s anything that could change the mellow mood around rates, it’s Thursday’s May consumer price index data (CPI). Analysts expect a headline rise of 0.4% month over month, according to research firm Briefing.com. Core CPI, which strips out energy and food, is also expected to rise 0.4%. These would normally be seen as pretty high estimates, though not compared with April figures of 0.8% and 0.9%, which were monsters on a historic basis.

From a single-stock perspective, there weren’t a lot of big stories yesterday outside of BIIB, LLY, and Apple (NASDAQ:), whose shares rebounded late after being in the red most of the day. This went against tradition, because AAPL shares historically tend to fall on the first day of the company’s annual Worldwide Developers Conference (WWDC).

The rebound could have partly been technical, because AAPL keeps sagging toward its 200-day moving average (now at $124.36) and then popping back up. This pattern has been going on for nearly a month, and some analysts think it could be a sign of underlying strength. On the other hand, AAPL hasn’t been able to get much traction on any of its rebounds from that technical level. The Tech sector skidded just a bit on Monday after a strong finish last week. This came as the semiconductor chip sector lost a bit of momentum.

Recent volatility readings don’t show much sign of turbulence anytime soon. The Cboe Volatility Index () finished at seven-week lows last week and is now below 16.5. The historic average is close to 20. The VIX has been trading in five-point ranges, and it seems to be settling into the 15-20 range now after hanging out between 20-25 for a while earlier this year.

There’s no lack of volatility in the so-called “meme” arena, however. Both GameStop (NYSE:) and AMC Entertainment (NYSE:) kept up their wild ways to start the new week, each of them rising sharply. GME reports after the close tomorrow, so that could be an event for a lot of people.

Gains in the memes yesterday weren’t as massive as some of the gains (and losses) seen last week, though. By the way, if you are trying to stay away from these stocks, be sure to check any mutual funds you own, because both AMC and GME have gained a lot of market weight this year. Some of the small-cap funds, in particular, might have more exposure to these two.

The Investor Movement Index® (IMXSM) increased 0.18 to 8.32 in May, up from its April score of 8.14. The IMX is TD Ameritrade’s proprietary, behavior-based index, aggregating Main Street investor positions and activity to measure what investors actually were doing and how they were positioned in the markets.

Clients tracked by IMX seemed to be trying to take some risk off the table in May, for instance favoring fixed income over equities. It’s the first time since October of last year that clients have been net sellers of equities, while mostly maintaining their level of overall exposure to the markets in an environment in which the Indices were mostly unchanged.

This is often caused by the equity buys being in higher Beta stocks. Looking forward it seems economic optimism may be on the rise—the economy is slowly but surely gaining strength and the market seems to have shaken off some of the recent inflation worries for now. 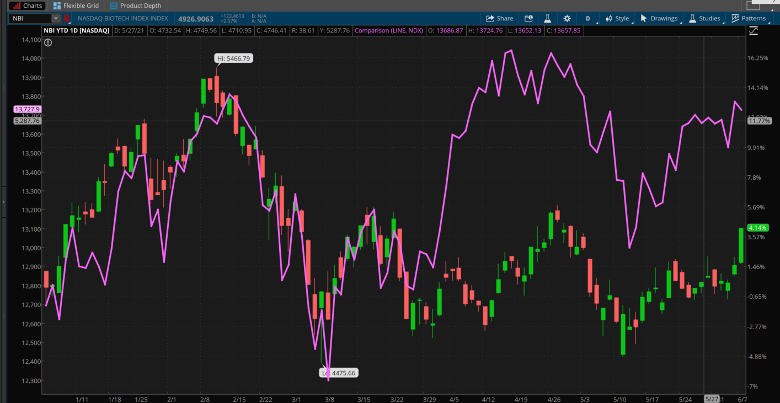 CHART OF THE DAY: BIOTECH REBOUNDS. The Nasdaq Biotech Index (NBI—candlestick) has lagged the Nasdaq 100 (NDX—purple line) and the broader market much of the year, but appeared to get a nice boost Monday after the FDA approved Biogen’s (BIIB) Alzheimer’s disease drug. Data Source: Nasdaq. Chart source: The thinkorswim® platform. For illustrative purposes only. Past performance does not guarantee future results.

Tracking Prices as CPI Looms: With Friday’s jobs report over and done, the biggest data point ahead of next week’s Fed meeting is Thursday’s consumer price index (CPI) for May. Back in April, jumped 0.8% from the month before, and core CPI (which strips out energy and food prices) rose 0.9%, the highest month-over-month rise since April 1982.

One question is whether recent wage growth could translate into higher prices. There’s no definitive answer, but the Chicago Tribune reported last week that some restaurant workers aren’t planning to come back to work until their benefits run out, and that restaurants in the city are having trouble filling positions. This kind of thing is something that could play into ideas that employers might have to raise wages to lure people back to jobs, which conceivably could fire up inflation. “The data for the last two months suggest that the rising demand for labor associated with the recovery from the pandemic may have put upward pressure on wages,” the Labor Department said in the jobs report press release.

Overall, core inflation rose 3% year-over-year in April compared with 1.6% in March, the kind of move that might seem scary if you didn’t keep it in context. Remember that the previous April was the heart of the pandemic shutdown, and May was also pretty slow last year. This means comparisons are slightly out of whack and the year-over-year number might get a little less attention from here on, at least while the economy laps those weird early days of Covid a year ago.

Big FDA Approval May Have Wider Ripples: Yesterday’s U.S. Food and Drug Administration (FDA) approval of Biogen’s Aducanumab (brand name Aduhelm) wasn’t just the first time the FDA has approved a new drug for Alzheimer’s disease since 2003. It also might imply some ripples for the entire U.S. pharmaceutical industry.

Two of the FDA’s key thresholds for drug approval are safety and efficacy. Meaning data from clinical trials must show not just that a drug is safe to use, but also that it really works. That’s a stricter standard than the European Medicines Agency (EMA), which gives the green light “if the benefits of the medicine are greater than its risks,” as the EMA says on its internet site. Going into the Aduhelm decision, there was mixed data on the drug’s efficacy, with two studies in direct conflict. An FDA panel of outside experts actually advised the FDA to reject the drug based on questions over efficacy.

In its approval, the FDA said Aduhelm “consistently and very convincingly reduced the level of amyloid plaques in the brain” in both studies. A reduction in those plaques is “reasonably likely to predict important benefits to patients,” the agency added. Let’s play that tape again: “Reasonably likely to predict” isn’t the same as “effective,” so maybe the FDA is taking a slightly different approach here—with the caveat that the FDA will require BIIB to conduct post-approval studies to show clinical benefit and could pull approval if those fail. The other change from normal protocol was the FDA overruling its advisory committee, which is rare. All this could get people thinking about what it means for future drug approvals.

Biotech Gets Booster: The (NBI) enjoyed a nice jolt from yesterday’s BIIB drug approval, quickly jumping to 3.6% gains. Strength in BIIB, one of the sector’s largest stocks, likely played a role. But you can’t rule out some strength coming from ideas that the FDA might be more likely to approve future drugs with a slightly different approach that seems at first glance a bit more favorable for drug companies. After all, as noted above, the BIIB approval came despite conflicting trial results and an FDA panel rejection. We’ll share more thoughts tomorrow on how this might affect the biotech sector over the long-term.