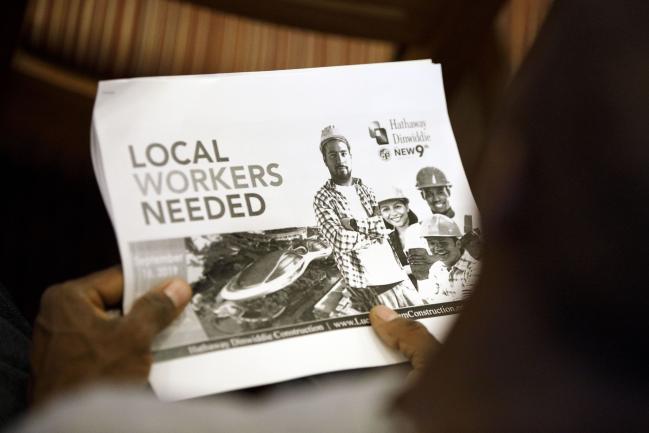 © Bloomberg. A job seeker holds an information packet during a fair for construction jobs at the Lucas Museum of Narrative Art in Los Angeles, California, U.S., on Monday, Sept. 16, 2019. The Department of Labor is scheduled to release jobless claims figures on September 19. Photographer: Patrick T. Fallon/Bloomberg

(Bloomberg) — Unemployed people claiming federal benefits won’t see a one-week gap in their payments, despite the delay in President Donald Trump signing the program extension into law, according to the Department of Labor.

States are implementing the provisions as quickly as possible, and the Labor Department doesn’t anticipate that claimants will miss a week of benefits due to the timing of the new law’s enactment, a spokesman for the Department said in a statement Tuesday.

Trump signed a bipartisan stimulus and government funding bill, which included an 11-week extension of unemployment benefits, into law on Sunday, a day after benefits expired. That prompted concern that jobless Americans would lose out on benefits for the last week of December. Trump held off signing the bill for several days as he demanded bigger stimulus payments for individuals and action on two unrelated issues involving election security and removing a liability shield for technology companies.

The pandemic relief law provides a $300-a-week payment for jobless individuals and extends benefits for self-employed and gig workers through mid-March. The $300 federal payments are on top of benefits that state unemployment offices provide. The state benefits vary by income and jurisdiction, but the average state payment was $378 a week, according to Labor Department data.

The measure largely extends programs with few changes, meaning that existing guidance will continue to apply, making it easier for the states to implement, the Labor Department spokesman said.

“Millions of jobless workers will be able to breathe a sigh of relief, knowing that they will not lose a week’s worth of income,” Senator Ron Wyden, the top Democrat on the Senate Finance Committee, said in a statement. “Now, Donald Trump’s needless delay in signing the relief bill still means unnecessary administrative headaches and late payments, but workers will not lose income.”

About 14 million Americans have been receiving benefits under the Pandemic Unemployment Assistance and Pandemic Emergency Unemployment Compensation programs extended in the law.

The uninterrupted jobless benefits could help bolster the economy that has struggled as consumer spending has been falling and unemployment claims remain at elevated levels.

Consumer spending, which accounts for a majority of the economy, dropped 0.4% in November — the first decline since April, according to Commerce Department data. Personal income decreased 1.1%, reflecting the winding down of several pandemic aid programs.