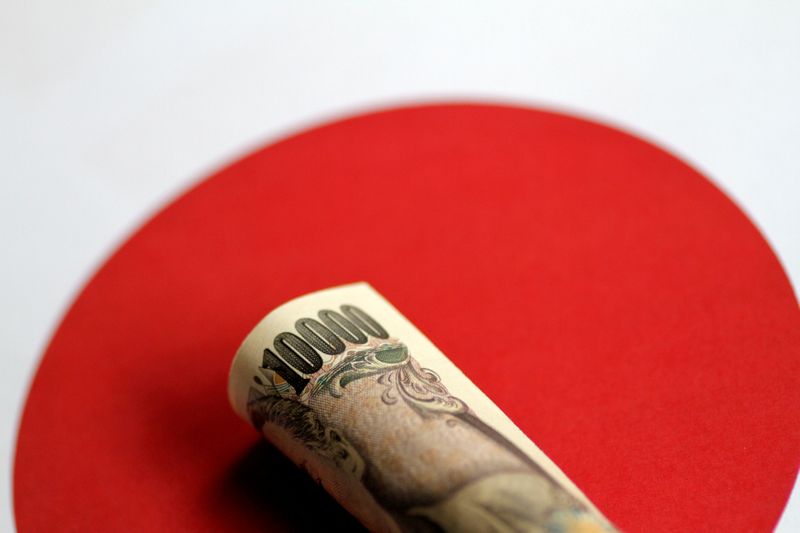 By Kevin Buckland and Hideyuki Sano

TOKYO (Reuters) -The developed world’s most dovish central bank and companies keen to put cash to work overseas have combined to make Japan’s yen one of the world’s worst performers this year, and that weakness could linger a while.

Factors at home and abroad have conspired to drive a 6% slide in the yen against the U.S. dollar this year.

Unlike other major central banks that are starting to face inflation risks and contemplating a withdrawal of emergency pandemic stimulus, the Bank of Japan has not only been grappling with deflation but has been notably loath to publicly suggest any tapering.

Japan has also been slower than most countries in getting its population vaccinated for COVID-19 and returning to normalcy. Its economy is shrinking and the absence of foreign tourists could mean no real boost from the delayed Tokyo 2020 Olympics this summer.

“I think the yen is going to be the one that really struggles as the global economy picks up,” said Joseph Capurso, head of international economics at Commonwealth Bank of Australia (OTC:).

While a recovery could undermine the dollar, which traditionally moves counter to economic cycles, the yen has even stronger safe-haven credentials and is likely to underperform, he said, projecting the yen at 116 in a year’s time compared with the current 110.

Indeed, as investors bet on economic recoveries in Europe and the United States, buoying global equities and bond yields as well as the dollar, the yen’s status as a cheap and safe funding currency has been reinforced.

“The carry trade is very much in vogue right now, and that doesn’t bode well for yen,” said Bart Wakabayashi, Tokyo branch manager of State Street (NYSE:) Bank and Trust.

“I don’t know what the story would really be to strengthen the yen right now.”

But even after U.S. yields retreated below 1.6% as the Federal Reserve pushed back against speculation for an early taper of its asset-purchase programme, the yen didn’t budge much.

Some of that weakness can be explained by a sudden burst of overseas acquisitions by cash-rich Japanese companies.

Data from mergers and acquisitions (M&A) advisory firm Recof show there were 210 foreign acquisitions by Japanese companies during the first four months of 2021 worth 3.71 trillion yen ($33.64 billion), triple the total value a year earlier.

“Interest rates are one important factor influencing FX rates, but not the only factor,” said Citigroup (NYSE:)’s Tokyo-based chief currency strategist Osamu Takashima. “M&A-related flows are pushing the yen down against the dollar.”

The yen’s divergence from U.S. yields, and its persistent weakness through April even as the dollar fell broadly, has market participants disagreeing on its outlook.

“The divergence in monetary policy can explain some degree of yen weakness, but not this level,” said Tohru Sasaki, JPMorgan (NYSE:)’s Tokyo-based head of Japan market research. Sasaki says the one-time nature of the M&A outflows combined with the yen’s dislocation from fundamentals should argue for a recovery to 105 or 106 levels.

On a trade-weighted basis, the nominal yen index has lost 6.2% so far this year to a level last seen in 2018. A large part of that is on account of a surge in the , which comprises a third of the basket, more than the U.S. and European currencies combined.

“The yen looks both stuck and cheap,” Societe Generale (OTC:)’s global head of FX strategy, Kit Juckes, said in a research note, adding it was “waiting only for some better news on Covid and economic reopening to spread its wings.”

Meanwhile, hedge funds and other speculators have been piling on bets against the yen. Data from the U.S. Commodity Futures Trading Commission shows a steep climb to the biggest net short yen position in almost two years in late April.

For others, such as Bank of America (NYSE:)’s head of Japan FX and rates strategy, Shusuke Yamada, the possibility that the Fed signals some form of monetary tightening and the continued rise in equities imply more yen weakness. Yamada reckons the yen could go as far as 115 per dollar, and end the year at 113.

“BOJ will be the laggard, and probably the biggest laggard, so I think that’s in investors’ minds,” he said.